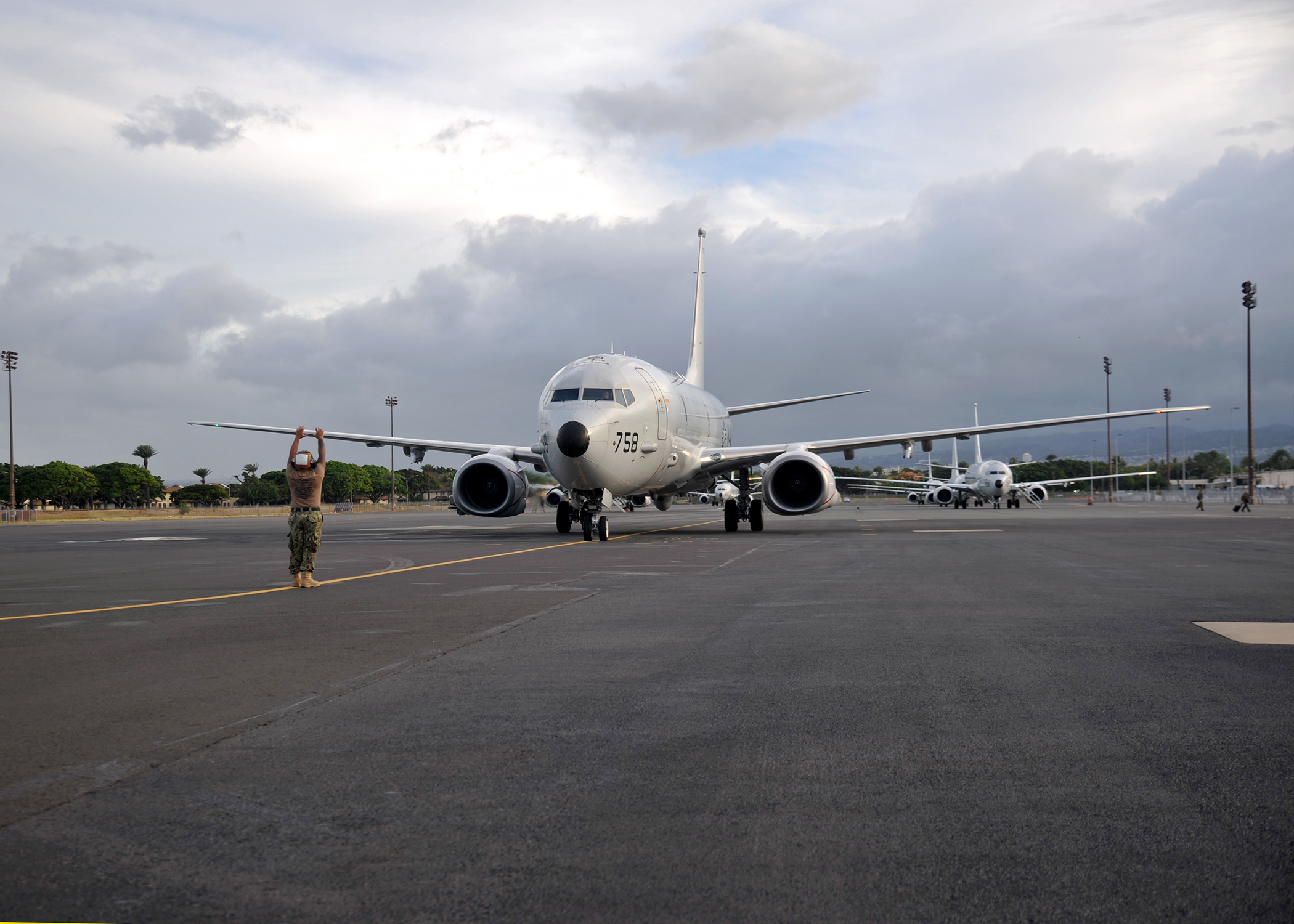 A Patrol Squadron 47 P-8A Poseidon returns to Joint Base Pearl Harbor-Hickam during Rim of the Pacific (RIMPAC) exercise, July 24. US Navy photo.

OFF THE COAST OF HAWAII – A U.S. Navy P-8A Poseidon flying at low altitude spent the better part of three hours pulling hairpin turns and looping through the airspace, working in a grid to drop sonobuoys that would listen for sounds in the water and help the aircraft close in on an “enemy” submarine below.

Lt. Meredith Trezise, the squadron’s tactics officer and the mission commander for the flight, took the information she had at hand and plotted out on her computer where she wanted to drop sonobuoys to locate and then track the submarine below – a U.S. submarine simulating an enemy diesel sub. Her plots sent a suggested flight pattern to pilots Lt. Chris Dennis and Lt. j.g. Nick Seeberger in the cockpit, who then wove the plane back and forth over the Pacific. Naval Air Crewman 1st Class (AWO1) Scott Thomas Wagner listened to the feed from the sonobuoys and watched as his computer translated noise in the water column into colorful graphs – which led to new locations to drop more sonobuoys, and more hairpin turns for the pilots.

The airplane eventually rose a few thousand feet, allowing an Indian Navy P-8I to swoop down and take over the mission, listening in to those sonobuoys already in the water to help find the sub and engage it if directed.

Though this collaboration occurred during an intermediate stage of the 2018 Rim of the Pacific exercise – where the aircrews all knew where the submarine was supposed to start out and where and when it might pop up its periscope – the collaboration points to an important capability in the vast Pacific Ocean, where Chinese, Russian and even North Korean submarines pose a potential hazard to U.S. and allied ships.

The Navy invited USNI News to join the Golden Swordsmen of Patrol Squadron (VP) 47 on a July 19 mission during RIMPAC, to understand the role of the airplanes in theater anti-submarine warfare, to get a feel for life aboard the planes, and to see the international partnership up close.

In this particular mission, the crew said, both the U.S. and Indian navies knew where the submarine below should be at various points in the exercise, allowing them to instead focus on interoperability: were they both seeing the same picture below? Could they both hear and see information from the sonobuoys the American crew dropped? Could they communicate from one plane to another, passing off the mission seamlessly? And, importantly, could they share the same airspace safely while deconflicting by flying at different altitudes?

The answer to all of the above appeared to be yes. By the end of RIMPAC, the U.S. and Indian planes were sharing high-end missions, an Australian P-8A squadron joined in as a major step towards the Royal Australian Navy declaring final operational capability on their new planes, and the U.S. and Australian P-8s not only prosecuted submarines but also dropped Harpoon missiles on a decommissioned U.S. ship during a sinking exercise (SINKEX).

“One of my main objectives is building a more lethal anti-submarine enterprise. So lethality is a theme that stems down from our secretary of defense and the National Defense Strategy, down through the Pacific Fleet commander, all the way down to me as the submarine force commander. And to build lethality, you have to have capabilities, you gotta have highly trained people, and speed is important. Submarines move around at a certain speed, but airplanes move around at a much faster speed,” he said.
“So when we detect adversary submarines, to be able to employ aircraft onto that contact information just greatly enhances the legs, the speed and the lethality that we can employ against that. So the P-8 adds an entirely new dimension for us to be able to do that mission and is just an incredible capable aircraft. The mission space greatly enhanced over the P-3. … The information system’s greatly enhanced.”

A submariner himself, Caudle joked that the P-8 crews in the Navy are “considered to be the second best – next to a submarine – at this mission.” 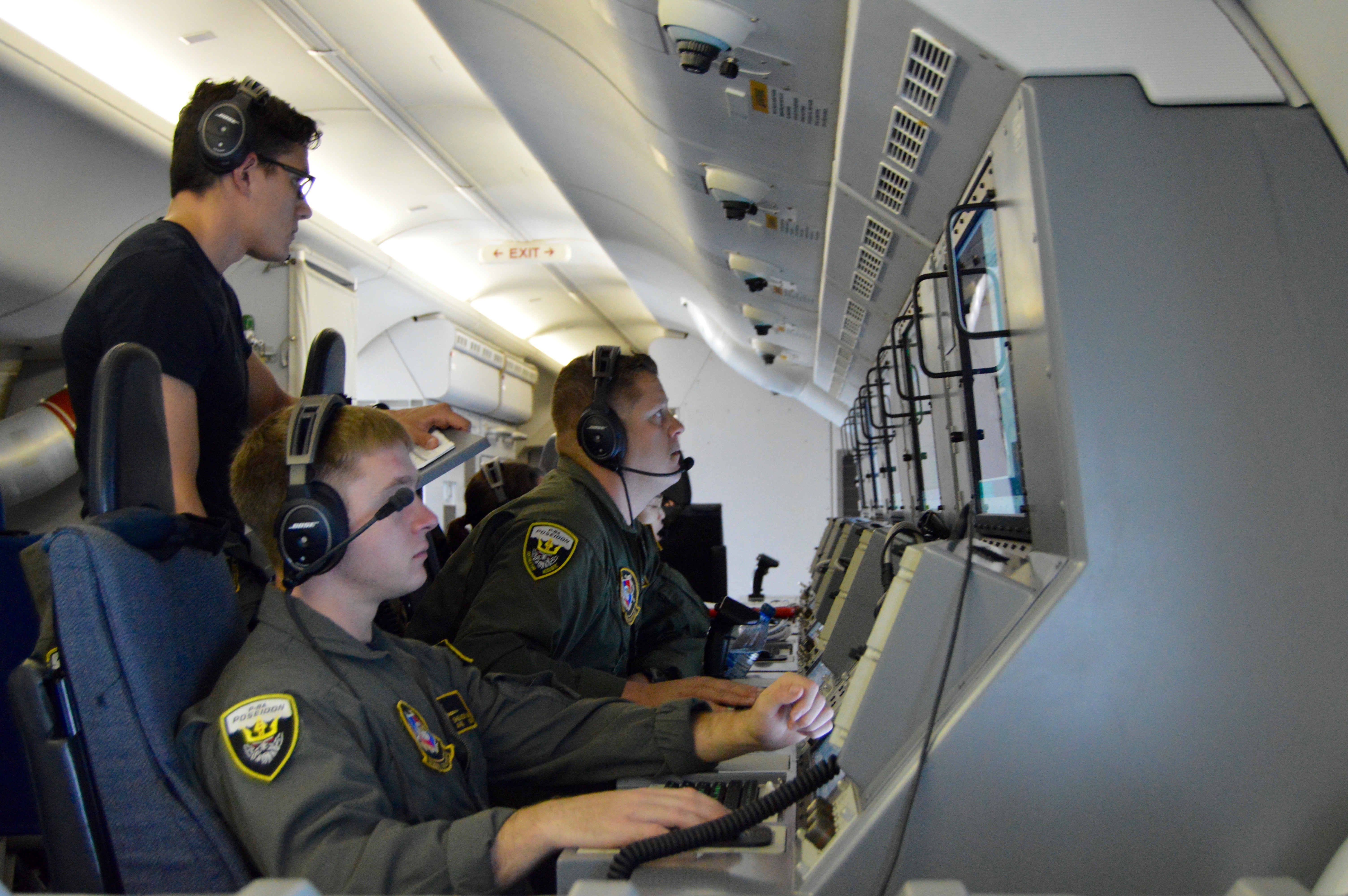 A crew from Patrol Squadron (VP) 47 conducts a mission to locate and track a submarine on July 19 during the 2018 Rim of the Pacific exercise in Hawaii. USNI News photo.

The mission is not an easy one. Though there are ships, submarines, P-8s and helicopters all working in tandem to hunt enemy submarines, they can just as easily get in each other’s way as they can help each other – one wrong move or miscommunication in the air could lead to a sonobuoy being dropped on a friendly helicopter, for instance. Events like RIMPAC, that not only get the full spectrum of U.S. assets together for sub-hunting but also loop in partners’ and allies’ ships and aircraft, are invaluable for the sailors who hunt subs for a living.

“If you’re in the air on the aircraft, that’s the best training you’re going to get. Putting yourself in an environment where the stakes are a little bit higher – where you are with other countries and you’re with hundreds of different assets that could actually benefit you or hurt you in certain scenarios – given those types of conditions, it puts you at a heightened situational awareness, puts you at a heightened condition of wanting to complete the mission, the task, and do everything you can at a more successful rate, if you will,” Wagner, the sensor operator, told USNI News.
“Just by being out there with other countries, you want to be the proud person coming home with the prize; you want to do your job at the next better level that you can.”

Going forward, he said, “the advantage is, knowing that when we have to do this in a real-world scenario, there’s already a kind of script to go along with it. We know we can rely on them, they can rely on us to pass the information backwards and forwards that’s going to lead us to the end-game that we have to succeed at.”

Trezise, the tactics officer, said that “across most forces, the principles of anti-submarine warfare are pretty similar, so if we might execute things in a slightly different way our ultimate goal is the same.” Still, seeing the “seamless” operation together that day was encouraging, in case she was ever called upon to work with the Indian Navy in a future deployment to the Pacific. 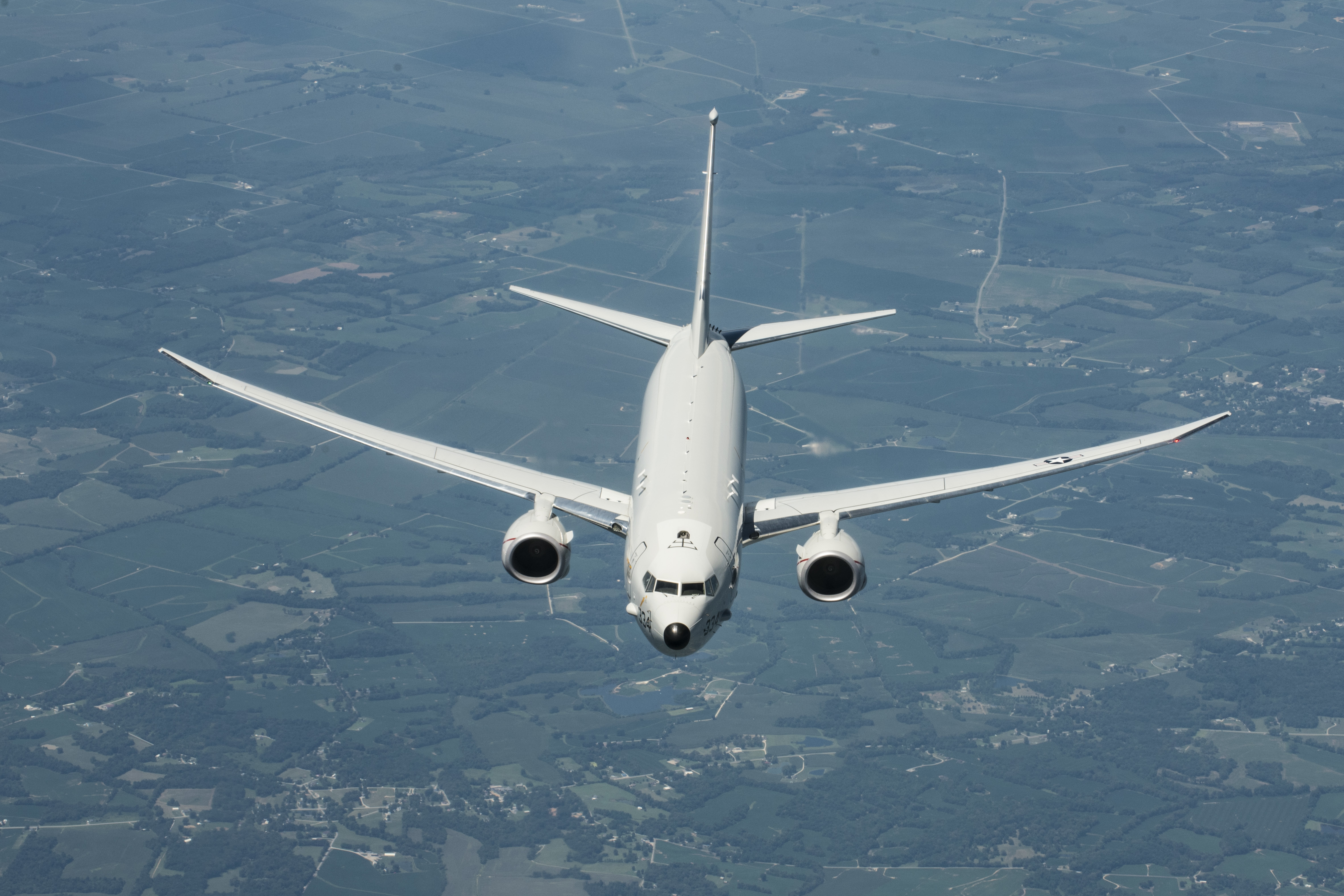 A P-8A Poseidon flies behind a KC-135 Stratotanker with the 121st Air Refueling Wing in the sky above southeastern United States July 26, 2018. The Poseidon had just finished being refueled by the Stratotanker. U.S. Air National Guard photo.

VP-47, based out of Whidbey Island, Wash., has 12 crews that tend to always fly together, allowing the pilots and the tactics officers in the back to get a good feel for how each other like to approach the mission. The squadron typically deploys in a hub-and-spoke model – a deployment to Japan might include detachments setting up in multiple air bases in Japan and perhaps into the Philippines, though operational needs could send the squadron anywhere if called upon. Missions vary in length – the July 19 mission at RIMPAC took about 30 minutes to arrive on station and lasted about five hours total, but some missions could take two hours to arrive on station and last 10 hours or more, crew said.

The P-8A is a modified Boeing 737; rather than passenger seats in the back, the middle section of the plane contains computers and workstations. The back is filled with two large chambers that load and drop passive and active sonobuoys – much like a revolver – as well as a single-drop spot if a specialized type of sonobuoy or a torpedo needed to be launched.

Crew said the Navy’s upgrade to the P-8A from the P-3 Orion before it has created a more comfortable ride – fewer aircrew get airsick looking at computer screens during the long missions, though that can still be a challenge in turbulent conditions. And being a Boeing 737 derivative also means some of the niceties of the passenger plane – such as the oven a commercial airline crew would use to heat up in-flight meals. The VP-47 crew said the oven is most often used for things like pizza roles and other reheatable foods, but some have gotten creative – Trezise and Wagner told stories of using the oven to make cookies and brownies, casseroles and even a roasted turkey breast for the crew during longer flights.