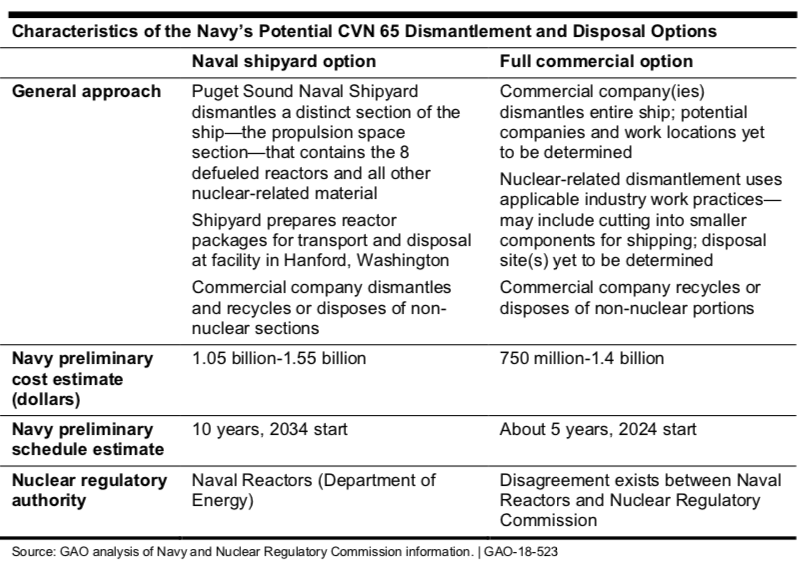 The Navy could rely on its extensive regulatory experience for the naval shipyard option. However, the Navy’s ability to effectively evaluate the full commercial option is hampered by a disagreement with the Nuclear Regulatory Commission (NRC), which oversees the commercial nuclear industry. Naval Reactors officials assert that NRC’s regulatory authority should apply to the full commercial option. NRC disagrees with this position. Coordination between the two agencies to identify the applicable regulatory authority and craft a regulatory plan would help ensure accountability, solidify cost estimates, and facilitate a CVN 65 decision.

The budget documentation and reporting that the Navy typically uses for ship dismantlement and disposal projects will not enable adequate oversight of CVN 65—a multi-year project with a cost that may exceed $1 billion. The documents that support Navy budget requests for dismantlement and disposal funding do not provide data that decision makers can readily use to track dismantlement costs against an established baseline or to evaluate funding plans for future years. Further, the Navy has no reporting requirements to support accountability for CVN 65 activities. Large defense acquisition programs generally are required to submit more detailed budget information and report on cost, schedule, and performance. These practices could be adapted for CVN 65 to provide information that will facilitate oversight commensurate with the scale of the effort.