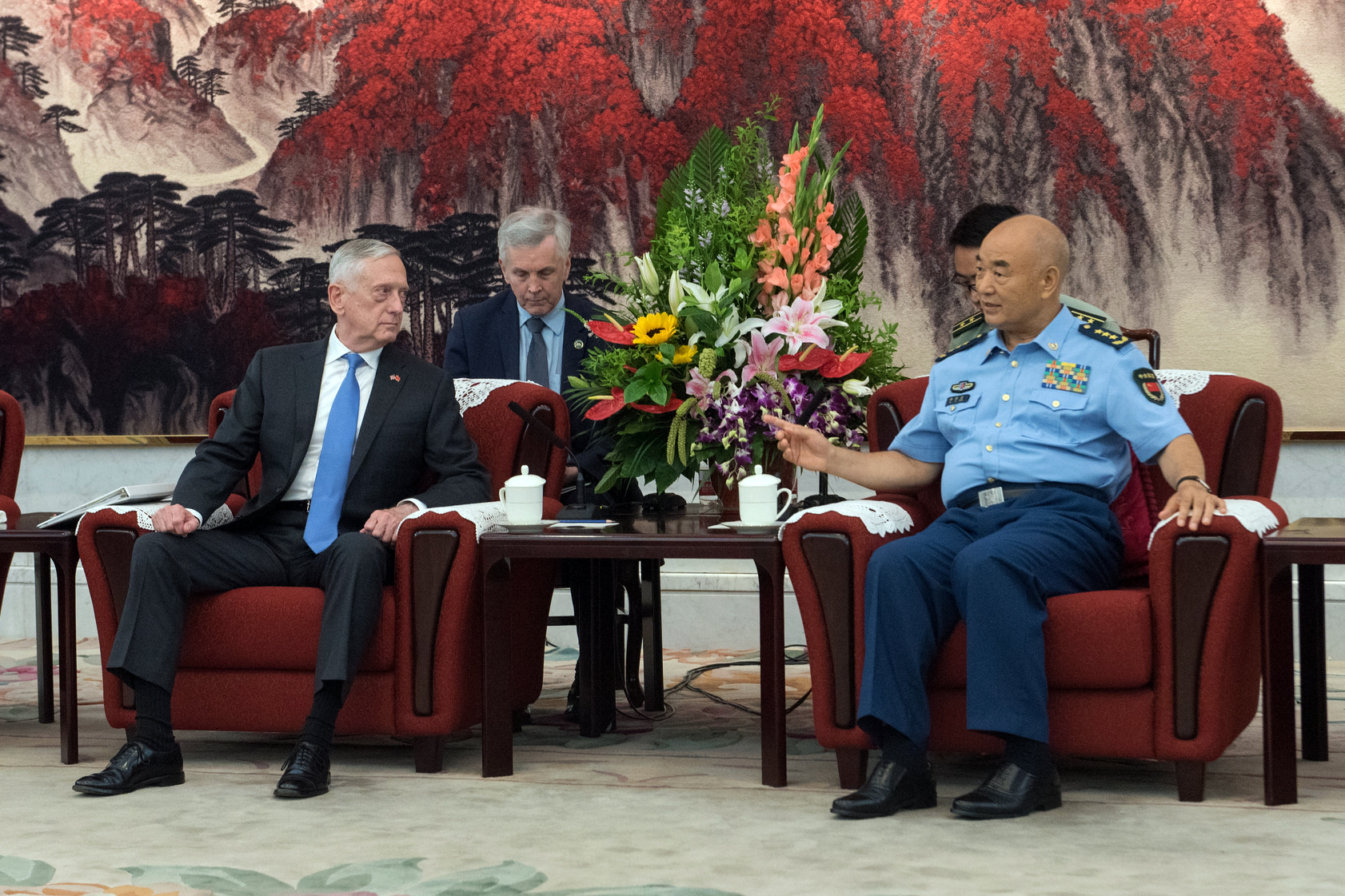 This ocean is big enough for the both of us, China’s leaders told Secretary of Defense James Mattis during his week-long swing through the Pacific spent finding common ground in some cases with Beijing or politely agreeing to disagree in others.

“The Pacific Ocean is vast enough to accommodate China and the United States, as well as other countries,” Xi said, according to the English translation of a statement released by China’s Ministry of National Defense after Mattis departed.

Mattis and General Xu Qililang agreed that reducing the region’s risk and strategic uncertainty relies heavily on substantive military-to-military contacts, according to a summary of the meeting provided by Dana White, head Pentagon spokesperson.

A broad range of topics was discussed, including the U.S. and China’s shared interest in the denuclearization of North Korea, were discussed during Mattis’ two-day stay in Beijing, the first such official visit by a U.S. Secretary of Defense since 2014.

Full transcripts of Mattis’ meetings were not made available by the Pentagon. However, after Mattis left Beijing, the Chinese government released more details of his conversations with China’s senior leadership regarding bilateral military relations, maritime security operations, and the status of Taiwan – China considers the island as part of the mainland, not a sovereign state.

“Needless to say, China and the U.S. have different views on some issues. It must be pointed out, however, that the common interests of China and the US far outweigh their differences, and the opportunities for cooperation far outweigh the challenges,” Senior Colonel Wu Qian, spokesperson for China’s Ministry of National Defense, said Thursday according to an English translation transcript of his monthly press briefing, released by the ministry.

Responding to a media question about the NDAA language, Wu said China’s position is clear.

“Taiwan is a part of China. We are firmly opposed to any form of official exchanges and military contacts between any country and Taiwan. This position is clear and definite. What needs to be stressed is that there is no way out to bank on foreign forces to build themselves up, and it is impossible to contain China with Taiwan. We urge the US side to deal with the Taiwan-related issues cautiously or it might shoot itself in the foot,” Wu said, according to the Ministry of National Defense transcript.

Mattis also visited South Korea and Japan, reaffirming the U.S. pledge to continue partnering with the countries. In the case of South Korea, Mattis said the U.S. would continue its close consultation with South Korean leaders and other partners in the region as “our diplomats continue their work to achieve the complete, verifiable and irreversible denuclearization of the Korean peninsula,” according to a statement released by the Pentagon.

“The U.S. and [South Korean] forces remain united, vigilant and ready to defend against any challenge,” Mattis said in a statement.

Coincidentally, Mattis’ meeting with China’s military leadership occurred the same day the Rim of the Pacific 2018 exercise started. In May, the U.S. revoked China’s invitation to participate in the exercise because of China’s actions deploying missiles and electronic warfare systems to artificial islands in the South China Sea.

While meeting with Wei, Mattis invited him to make a similar official visit to the U.S. “Wei accepted the invitation gladly,” Wu said during his briefing.

Meanwhile, China’s invite to RIMPAC 2018 was canceled but that doesn’t necessarily mean China won’t send a ship anyway. A Chinese surveillance ship was waiting for HMAS Adelaide (L-01) when Australia’s Canberra-class landing helicopter dock ship stopped in Fiji two weeks ago while transiting to join RIMPAC in Hawaii, according to Australian news reports.

However, during his media briefing, Wu dismissed the idea China would spy on Australia’s navy during Thursday’s press briefing.

“The Australian media’s reports are sheer fabrication out of nothing and whimsical imagination. To be very frank, the Australian media may have overestimated their country’s strength. China has no reason or need to conduct the so-called surveillance on Australian naval ships,” Wu said. “The way the Australian media draw attention by distorting the story only reveals their lack of common sense and confidence. I want to stress that freedom of the press is not equal to fabrication.”

During RIMPAC 2014, China sent four ships to participate in the exercise and slipped a fifth — an uninvited surveillance ship — into the region to monitor the activities.