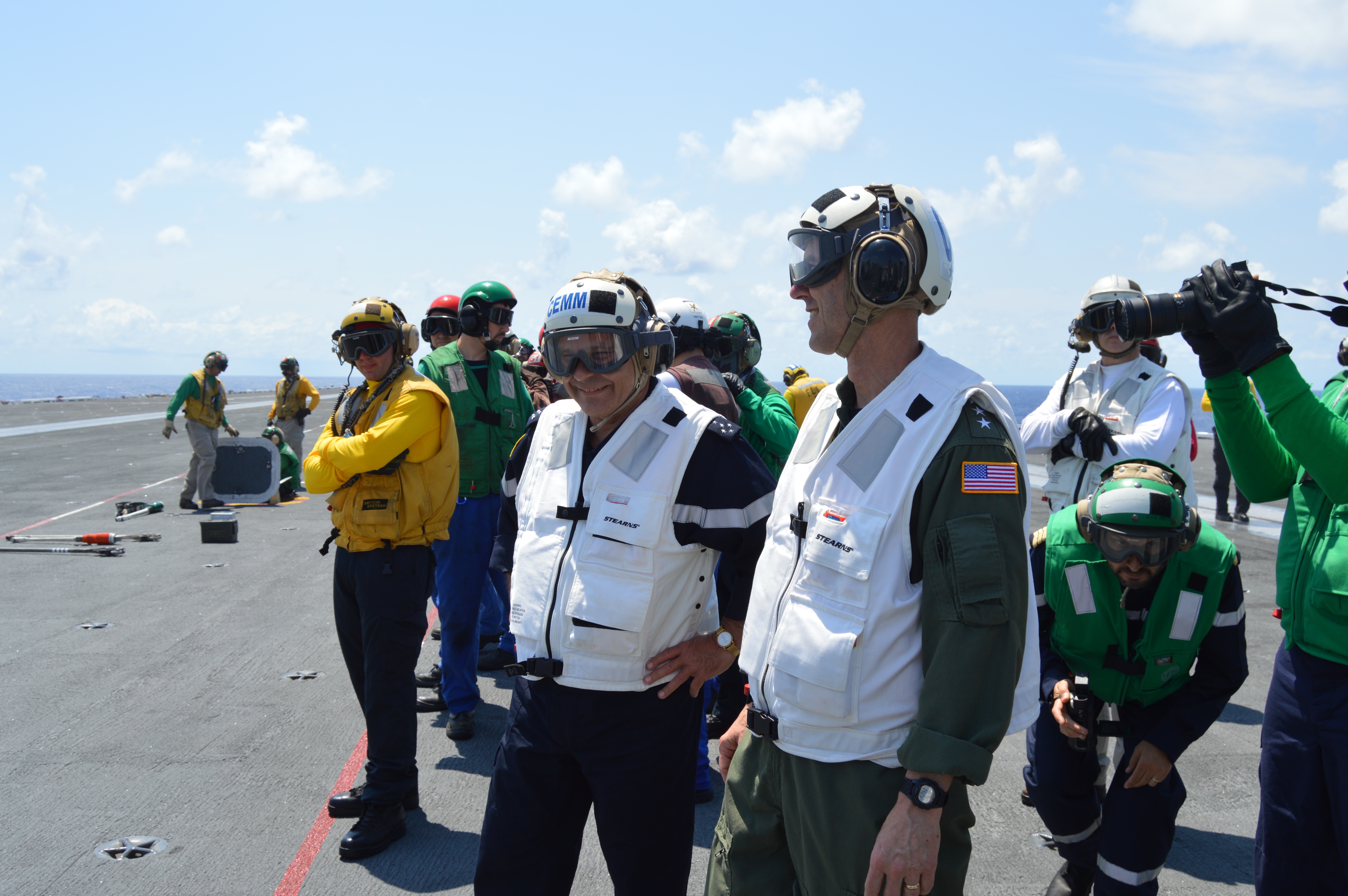 Chief of Naval Operations Adm. John Richardson and his counterpart, Chief of Staff of the French Navy Adm. Christophe Prazuck, observe launches of both American and French fighters aboard USS George H.W. Bush (CVN-77) on May 14, 2018. USNI News photo.

ABOARD USS GEORGE H.W. BUSH, IN THE VIRGINIA CAPES OPERATING AREA – When Chief of Naval Operations Adm. John Richardson and Chief of Staff of the French Navy Adm. Christophe Prazuck stood together on the flight deck of carrier USS George H.W. Bush (CVN-77) on Monday, pairs of fighters flew overhead – one American F/A-18E-F Super Hornet, one French Rafale at its side.

E-2C Hawkeyes – the U.S. Navy planes with plain gray radar domes, the Marine Nationale ones with their anchor and bullseye naval aviation emblem painted on – sat on the flight deck, set to be used interchangeably in later flight operations.

A flurry of colorfully clad flight deck crew members scurried around the admirals, with the only easily identifiable marker of nationality being the French crews’ distinct purple pants compared to the U.S. Navy’s khaki or dark pants.

This level of integration is exactly what the admirals hoped to gain from exercise Chesapeake 2018, originally conceived of as a means to get French pilots back at sea while their sole carrier wraps up a deep maintenance period.

“As we look out on the flight deck waiting to see the next launch, it’s almost impossible to tell the difference between U.S. sailors and French sailors as they prepare for the next launch,” Richardson said in the ship’s bridge, in a message broadcast to the ship over the 1MC.
“This is exactly the level of teamwork we’re going to need as we confront high-end competitors at sea in high-end blue-water warfare. We’re going to need our partners and allies to fight with us in the most advanced ways at sea to maintain sea control, maintain air control and protect this international order we’ve worked so hard to build together over the last 70 years.” 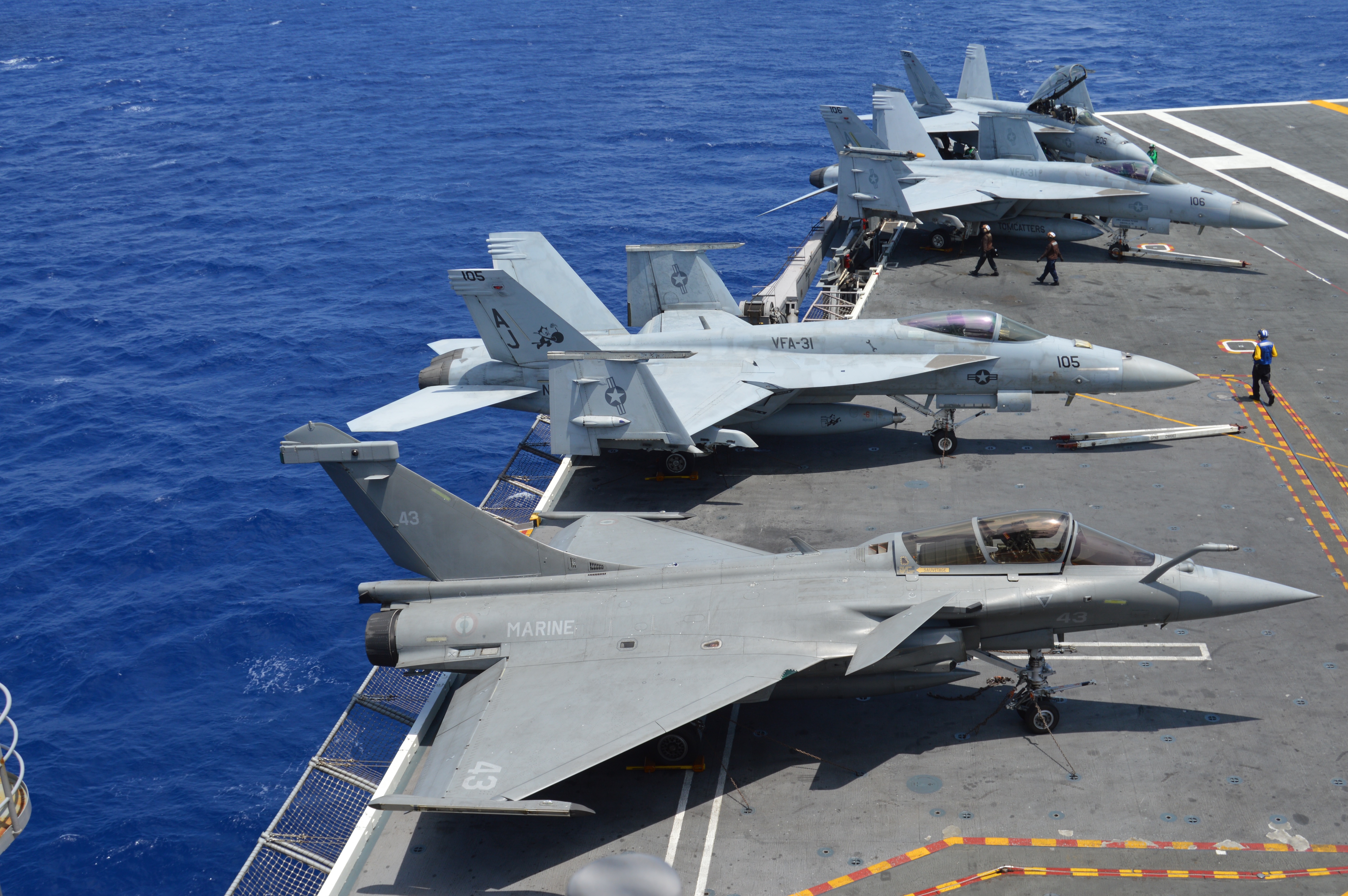 Prazuck offered a similar vision in his 1MC address: “All this is not merely a technical or a diplomatic exercise. What we’re really doing is preparing to fight together in the future, if ever called to do so. Proving our seamless interoperability is a very powerful message. In a few month’s time, French and U.S. carriers will inevitably take turns holding the line in the most dangerous, the most demanding theaters in the world, like we’ve done in the Middle East for years, like all the U.S. and French ships, submarines and [maritime patrol aircraft] did last year from the beaches of Guam to the freezing seas of the North Atlantic. This visit has convinced me we’re ready for it.”

The U.S. and French navies are no strangers to one another: they participate in naval exercises together, student aviators learn to fly together at U.S. Navy flight schools, and rising leaders learn together at the Naval Postgraduate School in Monterey, Calif. – where Prazuck was once a student as well.

Still, the level of coordination between the two navies at the tactical level has never been as great as it is now, in a month-and-a-half-long exchange aboard Bush. After working out some differences in procedure and policy between the two navies, Cmdr. Patrick Baker, executive officer of Strike Fighter Squadron (VFA) 213, told reporters that his F/A-18F Super Hornet squadron had seen “almost seamless operations with the French Rafales and Hawkeyes onboard. … One of the things I’ve taken away from this is, if there ever is an opportunity or a situation that develops, the French do bring a unique, complementary capability to a U.S. carrier air wing that could definitely assist us in strengthening our regional and our maritime capability.”

“We have the same mission set, so the tactics may be slightly different, but as far as the overall mission it’s very similar,” he said. Most importantly, though, he said the two sets of crews were part of an exclusive brotherhood and sisterhood of naval aviators. 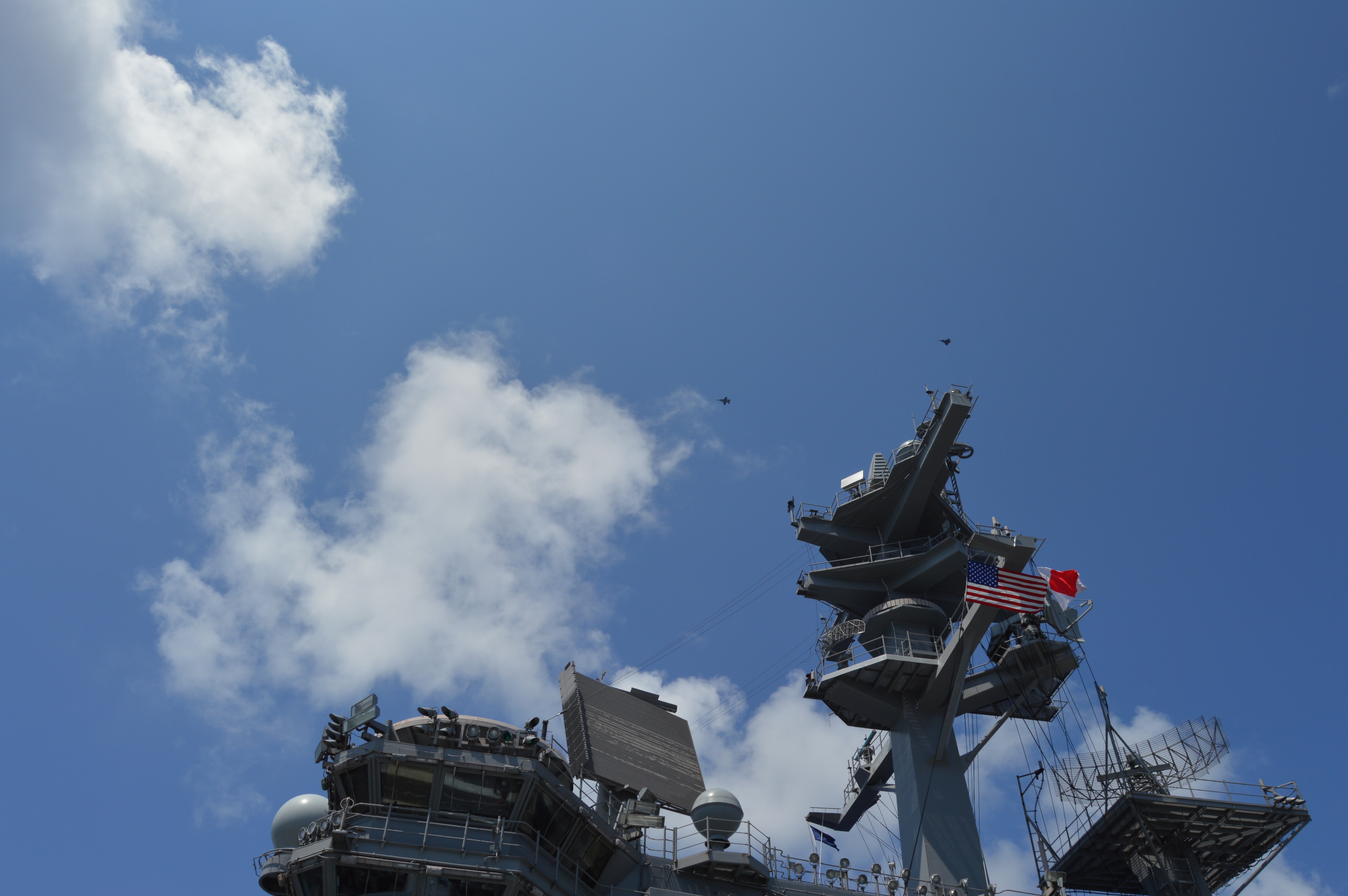 Richardson told USNI News that that bond and that ability to work seamlessly at the tactical level opens up options for him at the strategic level, where the world has more demands for naval presence than the U.S. Navy alone can provide.

“As we continue to get more and more capable at sort of the operational tactical level, then it kind of builds that level of confidence – sometimes we take it for granted how hard it is to do strike group operations on an aircraft carrier, even for our navy. It takes a lot of training and a lot of practice. Now you bring in a completely different team, another nation’s team – okay, so that takes a lot of practice together, and overcoming language barriers, operational differences,” the CNO said.
“But once you do that, now you can start to think about, okay, I have a very good sense of their proficiency, I know at a real detailed level what each of us can do. And as you start to think about the entire spectrum of missions and challenges that are on the plate, you can start to more effectively – and particularly if you’re working at a strategic level, you can say, okay, now we can really think of this as one larger team, a coalition of allies and partners upon whom we can really rely and we know, because we’ve operated with them and talked to them. The French have been really strong allies. As I mentioned, [French carrier FS Charles de Gaulle (R91) has served as] the command of Task Force 50, that’s a really big thing. We gave them a Meritorious Unit Citation, a U.S. Navy citation, and so that’s a high degree of trust, and that trust comes from knowing that they can do this at a real high-degree of proficiency.” 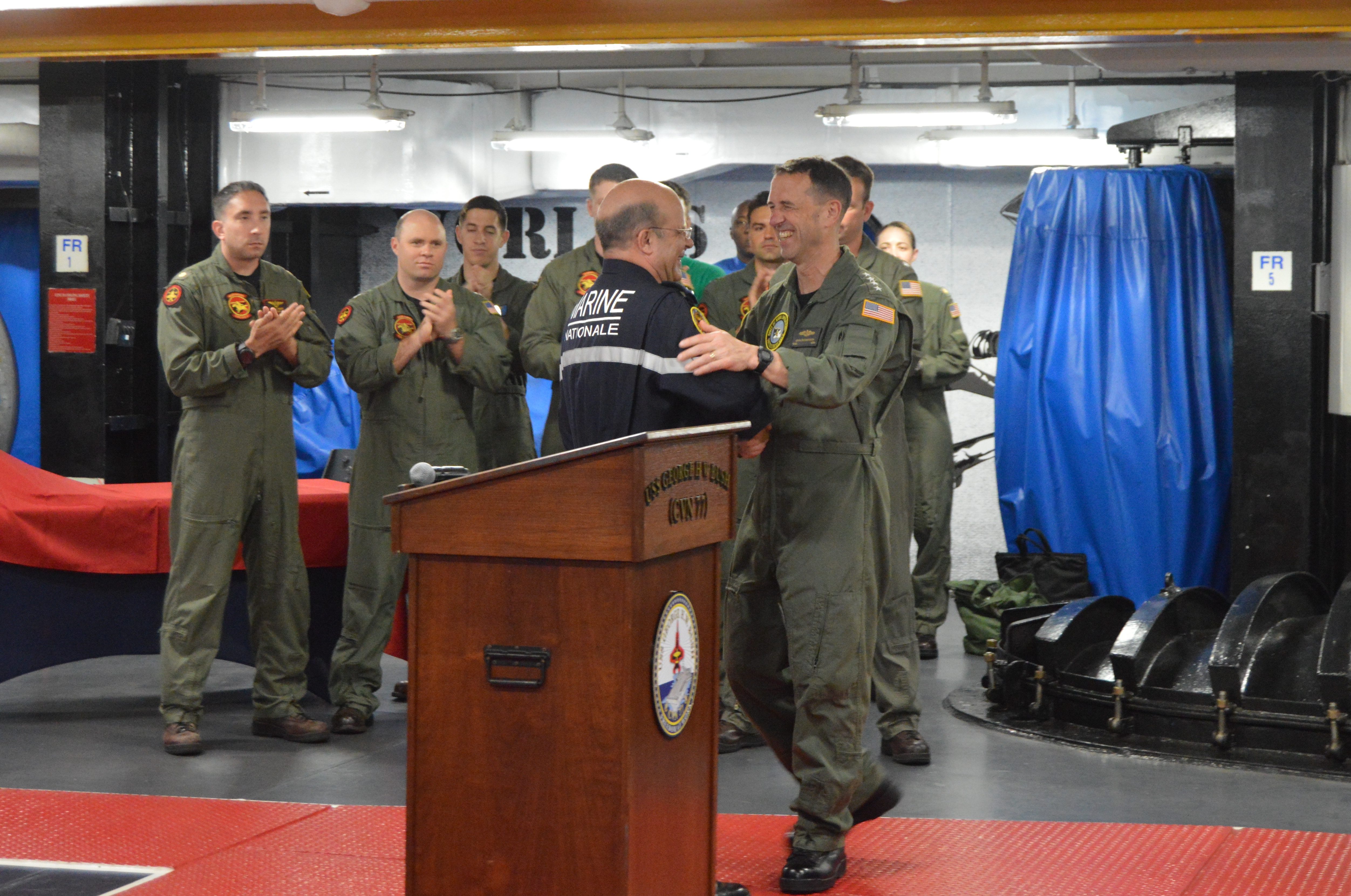 Chief of Naval Operations Adm. John Richardson and his counterpart, Chief of Staff of the French Navy Adm. Christophe Prazuck, address sailors in the forecastle of USS George H.W. Bush (CVN-77) on May 14, 2018. USNI News photo.

Asked if there was a follow-on project for the U.S. and French navies to tackle to build on the interoperability they’re achieving during this exercise Chesapeake 2018, Richardson said, “what I want to do actually is get out of the ‘project’ phase of our relationship and move into a more habitual interactive phase where it’s much more easy to stitch things together and we’re operating together kind of as a matter of habit. … Rather than these big events, we can think of high-end exercises as an event, but in between these continuing to work at sort of a lower level of activity, but still very meaningful.”