A previous version of this story indicated that Chief Boatswain’s Mate Jeffery D. Butler had faced more serious charges earlier this year. In fact, Butler was neither charged with hazarding a vessel nor negligent homicide in January.

The former commander of USS John. S. McCain (DDG-56) and a senior enlisted crewmember will face separate courts-martial next week for their roles in a fatal collision that killed ten sailors in August.

Cmdr. Alfredo J. Sanchez will face a single charge of dereliction of duty in a special court-martial at the Washington Navy Yard on May 25, the Navy announced on Monday. Chief Boatswain’s Mate Jeffery D. Butler will appear before a summary court-martial for similar charges on May 24.

The Navy would not provide the charging documents for Sanchez and Butler when contacted by USNI News on Monday.

Sanchez had faced more serious charges that included negligent homicide and hazarding a vessel earlier this year, according to a January statement from the service. 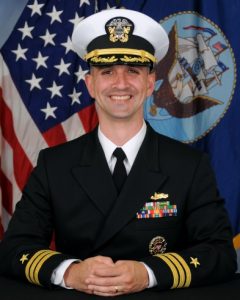 The trials will be the latest actions overseen by Adm. James Caldwell, director of Naval Reactors, who is the Consolidated Disposition Authority appointed to consider additional accountability for the fatal McCain and USS Fitzgerald (DDG-62) collisions.

Last week, Lt. j.g. Sarah B. Coppock pleaded guilty to similar charges facing Sanchez for her role in the June Fitzgerald collision. Coppock was sentenced to a relatively light punishment of three months reduced pay and given a punitive letter of reprimand.

A military criminal defense lawyer said the reduction in charges and the nature of the courts-martial for defendants like Coppock and Sanchez indicate defendants are reaching agreements to face lesser charges as part of a round of plea-arrangements.

“Sounds like we’re in deal city,” Eugene Fidell, who teaches military justice at Yale Law School, told USNI News on Monday.
“It may be that they’re having buyer’s remorse on taking a hardline [on these case] in the first place… There were fatalities but these cases maybe difficult to turn into criminal proceedings. “

In the same announcement, the Navy said former Fitzgerald commander, Cmdr. Bryce Benson, had waived his right for an Article 32 preliminary hearing charges including dereliction of duty, hazarding a vessel and negligent homicide.

“Updates on future hearings related to this case will be provided as they become available,” the Navy said in a statement.

Lt. Natalie Combs and Lt. Irian Woodley, two junior officers on watch in Fitzgerald’s combat information center during the collision, face court-martial on charges of dereliction of duty, hazarding a vessel and negligent homicide. The pair had a combined Article 32 hearing last week.

In addition to the criminal charges, the Navy has issued 18 non-judicial punishments to sailors involved in the incidents – 10 for Fitzgerald and eight for McCain.

The following is the May 14, 2018 statement from the service.

The former commanding officer of USS Fitzgerald (DDG-62), Cmdr. Bryce Benson, has voluntarily waived his right to an Article 32 hearing previously scheduled for May 21, 2018. In light of this waiver, the hearing is canceled. Updates on future hearings related to this case will be provided as they become available.

Additionally, trial dates are scheduled in the cases related to the USS John S. McCain (DDG-56) collision. Hearings will be held at the Navy Yard, Naval District Washington.

Charges against these individuals are only allegations. Each accused is presumed innocent unless and until proven guilty.