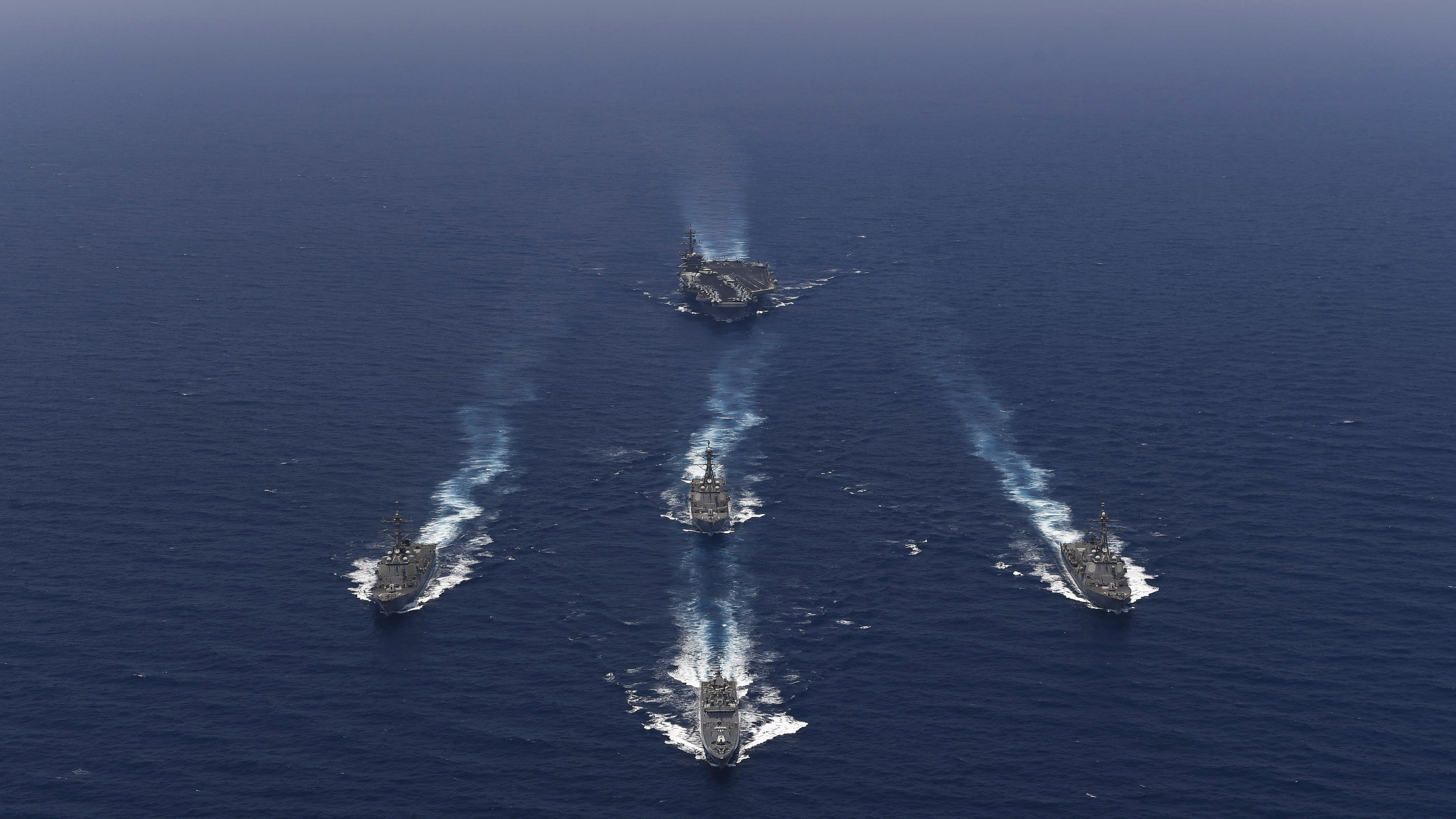 The Theodore Roosevelt Carrier Strike Group cruises in formation with the Indian navy Talwar-class frigate INS Tarkash (F50) on March 25, 2018. Theodore Roosevelt is underway for a scheduled deployment in the U.S. 7th Fleet area of operations in support of maritime security operations and theater security cooperation efforts. US Navy photo.

The bill, which will be marked up on Wednesday, adds $1.85 billion in shipbuilding over the Navy’s request, creating a $23.7-billion shipbuilding and conversion account that would buy 13 ships and pay for advance procurement activities on two Virginia-class attack submarines – one in FY 2022 and one in 2023 – that are not in the Navy’s current plans.

The bill takes away $310 million in Navy aircraft procurement – some due to program cost growth; some due to expected efficiencies that will come from the multiyear contracts the bill authorizes; and some due to the FY 2018 spending bill, which was finalized after the Pentagon made its 2019 request, covering a $206-million bill for the C-40A medium airlift program.

And the bill boosts Navy operations and maintenance by $143.3 million overall, though a significant amount of money is moved from the O&M budget into a separate National Defense Sealift Fund.

In total, the FY 2019 NDAA authorizes $717 billion on defense: $639 billion in the base budget, $69 billion in Overseas Contingency Operations (OCO) spending and $8.9 billion in mandatory spending.

“Restoring readiness while also increasing the capability and capacity of our Armed Forces is a key focus of this year’s defense policy bill,” HASC Chairman Rep. Mac Thornberry (R-Texas) said in a statement today.
“Continuing to reform the Pentagon to help speed decision-making and get the right tools in the hands of our warfighters faster is also a major priority. Together, these improvements support and strengthen our most valuable asset, which is America’s troops.”

Aviation readiness is a key focus of the bill, according to statements by both the committee Republicans and Democrats. The Republicans’ summary notes that $39.4 billion is dedicated to “overcome the crisis in military aviation by getting more aircraft in the air,” with the services’ flight hour funding increased by $24.2 million and other training operations funding increased by $83 million compared to the services’ request.

“In 2017, nearly four times as many members of the military died in training accidents as were killed in combat. In all, 21 Servicemembers died in combat while 80 died as a result of noncombat training-related accidents,” according to the summary.
“This spring alone, 25 were killed in military aviation mishaps. This tragic statistic is the latest in a chain of evidence that has led Chairman Thornberry and many members of the Armed Services Committee to believe that America’s Military is ‘at a crisis point.’”

Navy and Marine Corps leaders have pushed back against the notion that there’s a crisis, but they do acknowledge the need for more funding for spare parts, depot maintenance and other enablers to keep their aircraft ready for pilots to train in them.

However, HASC Ranking Member Rep. Adam Smith (D-Wash.) felt so strongly about the topic that he announced today an amendment he would submit during the markup that would establish an independent National Commission on Military Aviation Safety.

“The commission would review military aviation mishaps between FY 2013 and 2018 compared to historic averages; assess the causes contributing to mishaps; and make recommendations on safety, training, maintenance, personnel, or other policies related to military aviation safety,” according to a committee news release.

“It is time to establish an independent National Commission on Military Aviation Safety, so that we can understand exactly what causes are contributing to military aviation accidents, how current rates compare to historic averages, and what steps we can take to improve military aviation safety,” Smith said in the release.
“It is essential for our aviators and their families—as well as for our military’s ability to recruit, retain, and perform its mission—that Congress have an authoritative, objective, apolitical look at the causes of this problem so that we can figure out what is going wrong and what actions need to be taken.”

In addition to readiness issues, the bill focuses on the Indo-Pacific region and goes so far as to rename U.S. Pacific Command as the U.S. Indo-Pacific Command, in a nod to the National Defense Strategy’s emphasis on that larger region. The bill would also rename the Southeast Asia Maritime Security Initiative the Indo-Pacific Maritime Security Initiative, extend the authority of that program through the end of FY 2023, and add India as a covered country in the program.

In support of technologies the military believes will be relevant in future Pacific operations, the bill also adds an additional $20 million for development of hypersonic weapons, an additional $40 million for electromagnetic railgun development, $100 million for directed energy prototyping and $30 million for undersea and unmanned aerial warfare research, “which represents an additional investment in maritime robotics, autonomous systems, and energy storage technology,” according to the Democrats’ bill summary. The Republican summary also highlights artificial intelligence, machine learning and quantum computing as technology areas of interest.