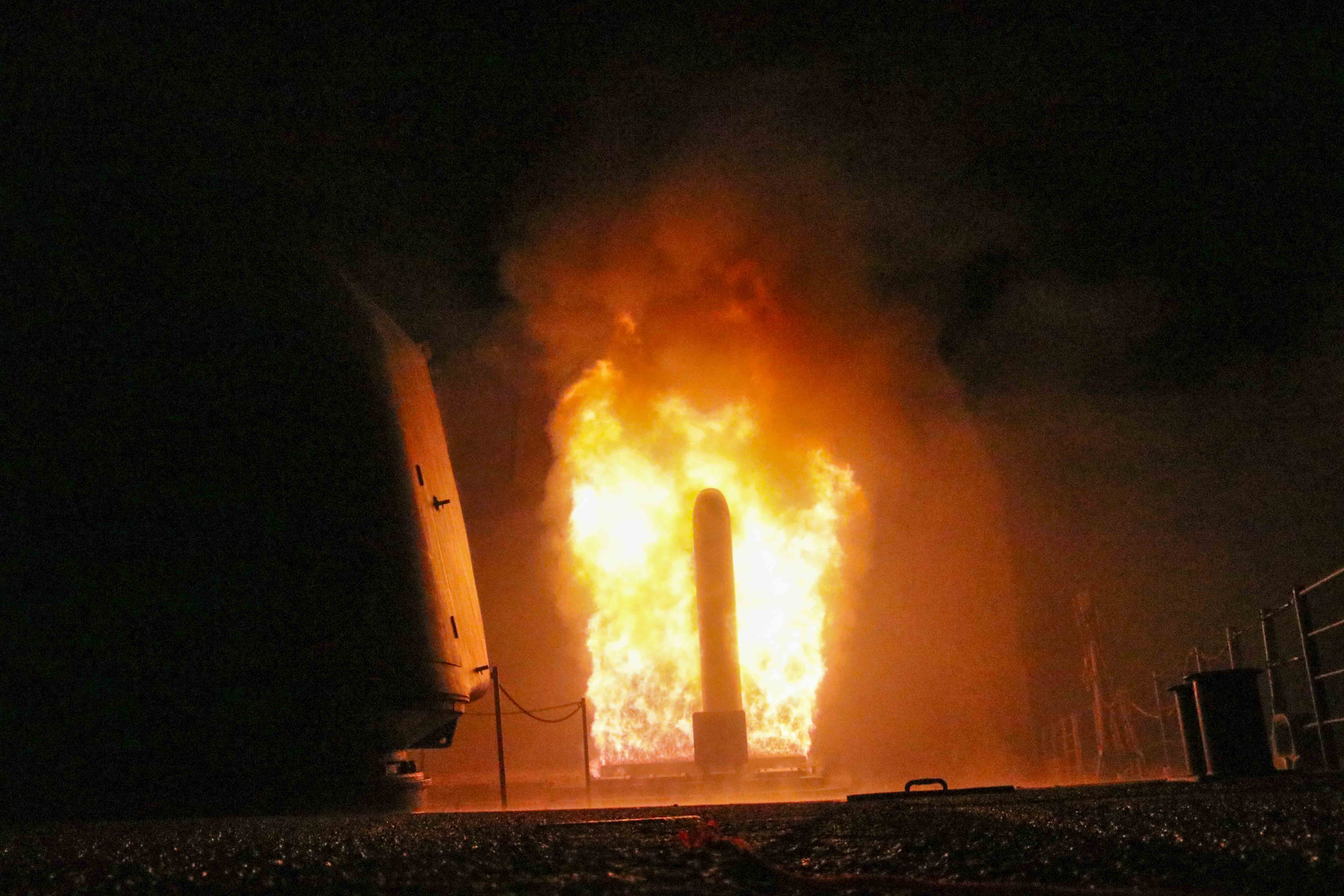 Two U.S. Air Force B-1B Lancer bombers, along with French Rafale and Mirage warplanes, and British Typhoon and Tornado fighters also participated in the strikes in the country. The B-1Bs were accompanied by U.S. fighters, a U.S. Marine Corps EA-6B Prowler electronic warfare aircraft and was supported by U.S tankers, according to press reports.

The strike was timed for all of the weapons to strike at about 4 A.M. local time on Saturday (9 P.M. EST on Friday). During a press briefing Saturday morning, Lt. Gen. Kenneth McKenzie, the director of the joint staff, said all missiles hit their targets within one minute of the designated strike time.

“None of our aircraft or missiles, missiles involved in this operation were successfully engaged by Syrian air defenses and we have no indication that Russian air defense systems were deployed,” McKenzie said.

The early morning strike time was selected to minimize the chance of civilian or Syrian military deaths, McKenzie said. The goal was to severely diminish the Syrian government’s capability to produce and deploy chemical weapons. The three distinct targets all contained what McKenzie described as either chemical munitions or large, immovable equipment used to deploy or process these munitions.

“Last year we conducted a unilateral attack on a single site. This evening we conducted strikes on multiple sites with two allies,” Secretary of Defense James Mattis said during a media briefing Friday night.

This was a significantly heavier strike than the one the U.S. conducted a year ago with almost 60 Tomahawks on the al-Shayrat Airfield, Mattis said, telling reporters “we used a little over double the weapons than what was used last year.”

The three targets, which were selected to inflict damage on the Syrian chemical weapons program, because their locations minimized the chance for civilian injury, and to mitigate the risk of Russians being involved, Chairman of the Joint Chiefs of Staff Gen. Joseph Dunford said at the press briefing.

U.S., French and British forces fired a total of 105 missiles at the facilities.

“They had three buildings there and a parking deck,” McKenzie said.
“Now they don’t.”

The Him Shinsar command facility was hit by seven air-launched French SCALP missiles.

Using normal deconfliction of airspace channels, the Russians were alerted to U.S. plans to use certain airspace over Syria, but they were not informed of the reason or the targets, McKenzie said.

“None of our aircraft or missiles involved in this operation were successfully engaged by Syrian air defenses and we have no indication that Russian air defense systems were deployed,” McKenzie said “All aircraft returned to bases. We assess 40 surface to air missiles were launched by the Syrian regime and most of these were launched after the last impact of our strike was over.”

The Syrian missiles fired after the strike posed a risk to civilians, McKenzie said, because they all appeared to be unguided, which means once fired, they Syrians did not have a means to control their course.

“When you shoot iron into the air without guidance, it’s going to come down somewhere,” McKenzie said.

While there had not been any sort of Syrian or Russian response, other than the initial firing unguided missiles by the Syrians, a Russian-led misinformation campaign has already started online, Pentagon spokeswoman Dan White said.

“The Russian disinformation campaign has already begun,” White said.
“There’s been a 2,000 percent increase in Russian trolls over the last 24 hours.”

The strike was part of a coordinated U.S., U.K. and French retaliation action against an alleged chemical weapons attack by the Bashar al-Assad regime. The strike was announced by President Donald Trump on Friday.

“A short time ago I ordered the United States Armed Forces to launch precision strikes on targets associated with the chemical weapons capabilities of Syrian dictator Bashar al-Assad,” Trump said.
“A combined operation with the armed forces of France and the United Kingdom is now underway. … We are prepared to sustain this response until the Syrian regime stops its use of prohibited chemical agents. I also have a message tonight for the two governments most responsible for supporting, equipping and financing the criminal Assad regime. To Iran, and to Russia, I ask: What kind of a nation wants to be associated with the mass murder of innocent men, women and children?”

The British government released a statement following the strike, detailing its participation.

“The UK element of the carefully coordinated joint action was contributed by four Royal Air Force Tornado GR4s. They launched Storm Shadow missiles at a military facility – a former missile base – some fifteen miles west of Homs, where the regime is assessed to keep chemical weapon precursors stockpiled in breach of Syria’s obligations under the Chemical Weapons Convention. Very careful scientific analysis was applied to determine where best to target the Storm Shadows to maximize the destruction of the stockpiled chemicals and to minimize any risks of contamination to the surrounding area. The facility which was struck is located some distance from any known concentrations of civilian habitation, reducing yet further any such risk.”

The office of French President Emmanuel Macron released footage of French fighters preparing for the strike.

“We cannot tolerate the normalization of the use of chemical weapons,” Macron said in a statement.
“The red line set by France in May 2017 has been crossed.”