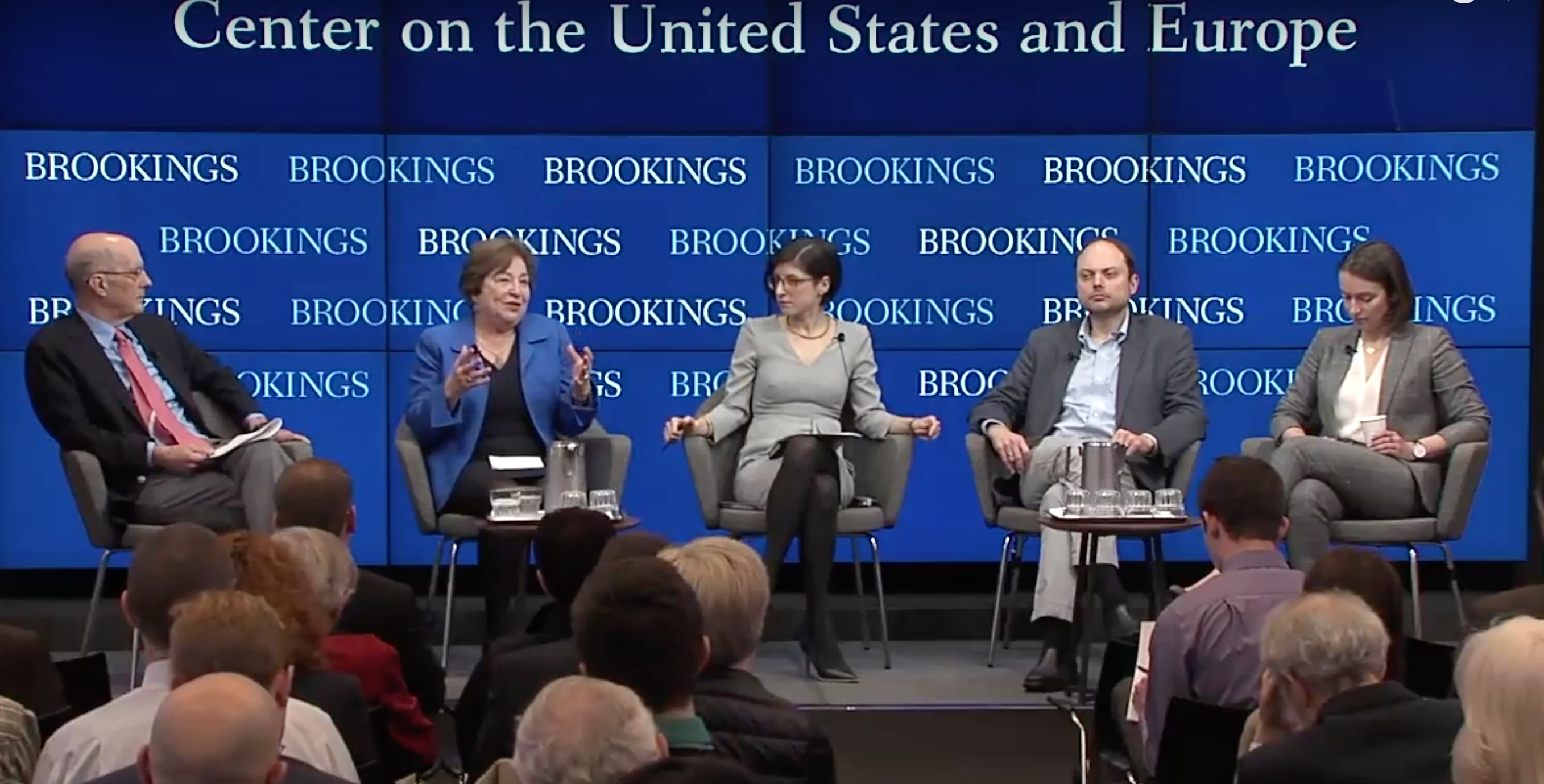 With Vladimir Putin in office for another six years, international security experts agree relations between the United States and Russia could sink even lower than they are now and that the danger of conflict between the nuclear giants is greater than it was in the darkest days of the Cold War.

Speaking at the Brookings Institution in Washington, D.C., Strobe Talbott, a former senior State Department official in the Clinton administration, said Russia “is ratcheting up the arms race” at the same time as “we are not seeing anything of arms control” as existing treaties are being ignored or allowed to lapse.

“Putin has a lot to crow about … beyond the rigged election” on March 18 – from assertiveness in the Syrian civil war and the greater Middle East to a possible visit to the White House after his victory at the polls to better economic and military relations with China, Talbott said at the April 4 event.

Julia Ioffe, a writer at the Atlantic Magazine, said Putin saw the Syrian civil war as “a way to muscle his way back” into the international arena following harsh sanctions Europe and the United States laid on Moscow in 2010 and have since increased to curb Russian aggressiveness outside its borders. The sanctions and increased defense spending in NATO were in response to Moscow’s annexation of Crimea and the continued military backing of separatists in eastern Ukraine.

Even with the nomination of CIA Director Mike Pompeo to become the next secretary of State and John Bolton to move in as the national security adviser, the Kremlin sees an opening in the Trump administration to divide the West and blunt future responses to its adventurism, Ioffe said. Pompeo and Bolton, both known for their hard-line approach to Moscow, are also “obsessed with terrorism,” which allows Putin “the perfect opportunity to play the counterterrorism card” as he did in Syria – though she noted Putin ultimately has not provided much help in the fight against the Islamic State.

Talbott and others mentioned the poisoning of former Russian military intelligence officer turned British informant Sergei Skripal and his daughter Yulia in Great Britain, said Talbott said the poisonings were a reminder to former Russian intelligence officials not to talk to the West. The Kremlin has publicly blamed the CIA and MI6, the United Kingdom’s intelligence agency, for the attacks as part of its disinformation campaign. Talbott said the idea behind those claims “is to lie and confuse people” about what really happened and who committed the crime.

Though many draw comparisons between today’s Russia and the Soviet Union during the Cold War, Angela Stent, director of the Center for Eurasian, Russian, and East European Studies at Georgetown University, noted some differences.

“Russia is not isolated” as the Soviet Union was, she said, citing the close energy ties between Western Europe and Russia despite the continuing sanctions as a demonstration of economic integration; the improving personal relations between Putin and China’s Xi Jinping even though “Russia is the junior partner” in countering the United States; and the country’s ability to work with India on a number of projects that are not covered by the sanctions.

“Mr. Putin is in Turkey with Mr. [Recep Tayyip] Erdogan and Iran,” Stent said.
“Look at Latin America,” where Russia is trying to expand its influence beyond Cuba and Venezuela through trade agreements.

Later, in answer to a question, Stent added, “Russia has taken over in the Middle East” from the United States. Moscow “is viewed as an honest broker” and is able to communicate with both Sunnis and Shias as well as with Israel on issues of importance to the region.

“Russia is there to stay,” she said.

As for the March 18 presidential election, Vladimir Kara-Murza, chairman of the Boris Nemtsov Foundation and vice chairman of the Open Russia Foundation, called it a sham. Russia “is the Potemkin village of democracy” where real opposition candidates have been killed or kept off the ballot and ballot-stuffing and voter intimidation are widespread.

“The outcome was never in doubt” in a campaign where Putin used increasingly bellicose rhetoric, saying Russia has new cruise missiles capable of getting through all American defenses to hit their assigned targets.

Kara-Murza, who was poisoned himself and is a vocal opponent of Putin, said the level of repression in Russia is higher now than in the waning days of the Soviet Union in the late 1980s. Using international metrics, he said 146 people are being held as political prisoners now compared to 126 then.

Much of this crackdown “is directed at the Crimean Tatar community,” which opposed the seizure of the peninsula from Ukraine.