Time and again, Russia has failed to deliver the regime of Bashar al-Assad on Moscow’s promises to facilitate an end the Syrian civil war or even to have it comply with temporary ceasefires, the commander of U.S. Central Command told the House Armed Services Committee on Tuesday.

Gen. Joseph Votel put it bluntly: Moscow “is not capable or doesn’t want to play a role” in finding a political solution to the fighting that has gone since 2011. The United Nations estimates an estimated 350,000 have been killed and the widespread, prolonged fighting has displaced millions.

As the Islamic State’s hold on territory in Syria and Iraq is collapsing, the civil war continues. “Russia has added complications” to the situation where Turkish, Iranian, American-backed Syrian Democratic Forces and Assad regime forces are converging on each other, setting the stage for more fighting. He called the Kremlin’s manipulative behavior as being both “arsonist and firefighter” to advance its own interests.

Votel said Russia’s objective is to “weaken each party’s bargaining position” before some form of Geneva negotiation process takes hold to resolve the conflict. In his opening statement, he noted, “Russia’s interests in Syria are Russia’s interests.”

Later in answer to a question, he said, “As we see the convergence of forces in Syria, we see divergences” of how to proceed among all the parties.

“The principal reason [the United States is engaged in Syria] is defeating ISIS.” Under the administration’s announced plan, it intends remaining engaged when that defeat happens so the Sunni-terrorist organization can’t re-surge as it did following the U.S. withdrawal from Iraq. He added during Tuesday’s hearing that American presence will continue until “the right security and stability is in place. …That will take some time.”

Votel, in his written testimony, estimated that 98 percent of the territory once controlled by the Islamic State has been retaken, including Raqqah, its self-proclaimed capital in Syria.

Other American goals in the operation include: stopping the use of weapons of mass destruction, providing humanitarian aid to refugees and displaced civilians, re-assuring allies on Syria’s borders of American commitment and ensuring a political solution.

The original reason for sending American forces to Syria was “largely driven by the collective security [arrangement with] Iraq,” following the Islamic State’s military forces’ capture of the large city of Mosul. in 2014. The second largest city in Iraq has also been retaken.

Several times, he was asked what the United States is doing to counter Iran’s influence in Syria and Iraq. “We can do a lot through our partners” and “we can do that with a smaller investment” with lower costs, he said.

Working with the Iraqi government and the Syrian Democratic Forces, a mixture primarily of Kurdish and Arab fighters, this cooperation “makes it difficult to carry out their activities” of supplying supporters, moving forces or controlling territory. Votel said, “They don’t want them in their country; they don’t want them in their area” threatening stability. He added the disruption effort has been aimed at land routes, but Tehran could shift to using air, maritime or going through North Africa to coordinate with its supporters and partners. 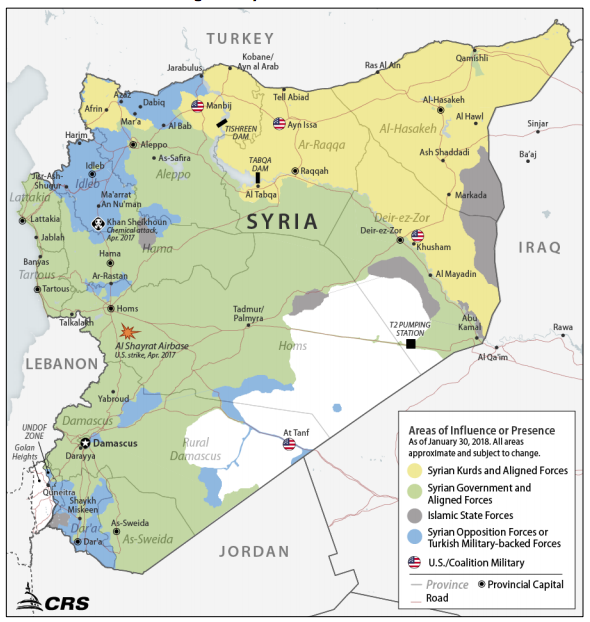 As an example of this approach of working with indigenous forces outside of Syria, he cited the command’s “using our intelligence and using some of our experience” with the United Arab Emirates and Saudi Arabia in keeping the Bab el-Mandeb Strait clear of mines. He added without going into detail that collaboration extends to preventing the laying of mines in the waterway connecting the Red Sea to the Gulf of Aden in Yemen, not simply sweeping for explosives.

Sixty to 70 ships, primarily oil tankers, pass through the chokepoint daily. In addition to the danger of mines, tankers have come under attacks from Houthi rebels ashore.

Votel said, “Maritime resources are adequate” for the command’s mission and they “do maintain a constant presence” in those waters. The presence includes vessels from partners and allies.

Overall to counter Iran in the region, the command is assuring allies and partners of a continued U.S. commitment, defending them against its ballistic missile threat, ensuring Tehran does not develop nuclear weapons and “pushing back on the narrative” of America becoming a disinterested ally.

At the far eastern reach of the command’s responsibility, Votel said success in Afghanistan “will require cooperation with Pakistan” in eliminating cross-border safe havens from the Haqqani network, Taliban and other terrorist groups. “We are now beginning to see positive indicators” from Islamabad in that direction. But those moves do “not yet reach decisive action.”

In his prepared statement, he acknowledged the Afghan government’s continued problems with “competing interests” for political control of the country and corruption.