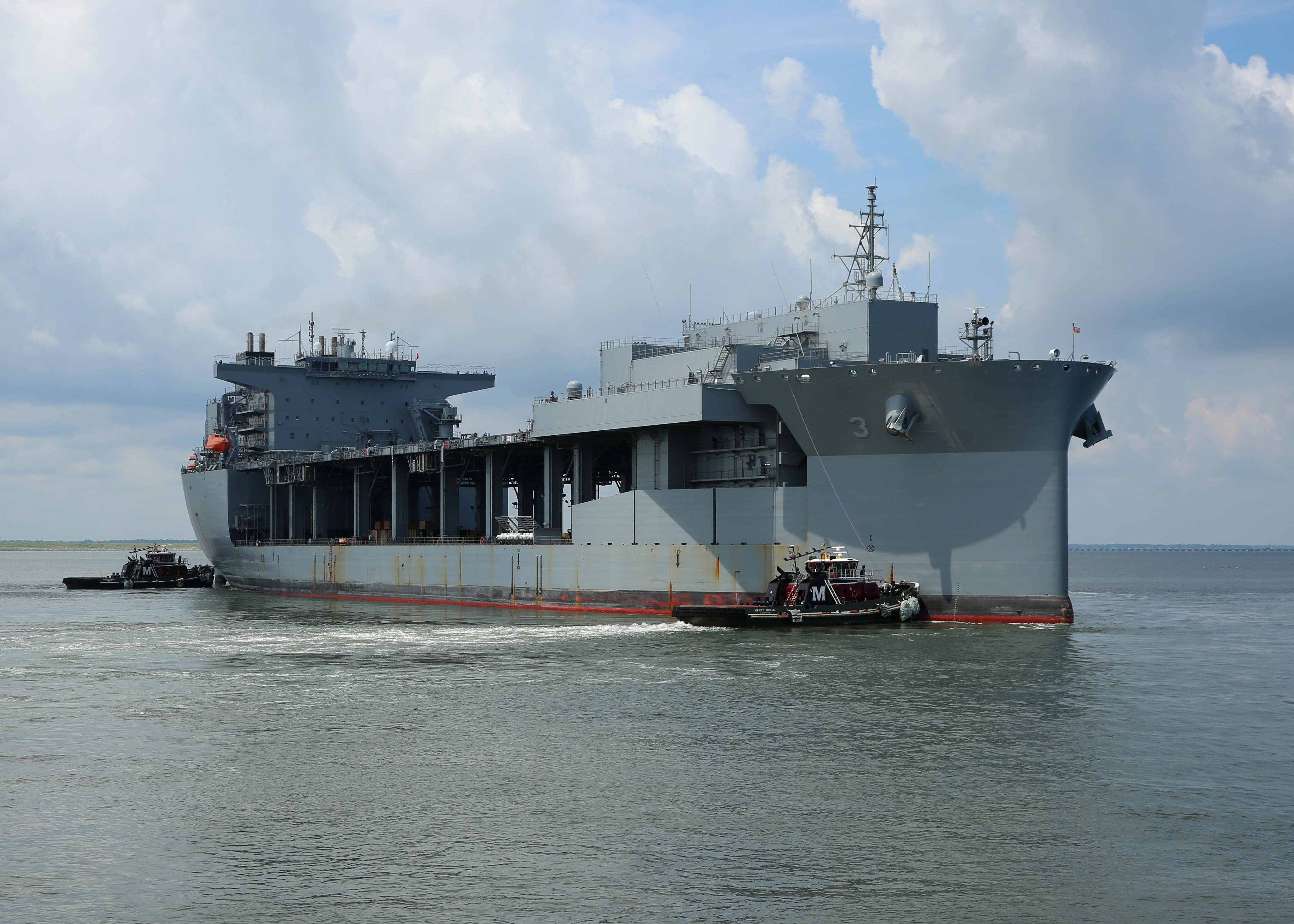 The Navy’s second afloat base for special operations and mine countermeasure forces has delivered to the service, according to a Thursday statement from Naval Sea Systems Command.
USNS Hershel “Woody” Williams (T-ESB-4) entered service with Military Sealift Command during a Thursday ceremony in San Diego, Calif.

“The delivery of this ship marks an enhancement in the Navy’s forward presence and ability to execute a variety of expeditionary warfare missions,” Capt. Scot Searles, strategic and theater sealift program manager within Program Executive Office (PEO) Ships, said in a statement.

The ship is the fourth hull built by General Dynamics NASSCO based on the Alaska-class oil tanker design and designed to augment the Navy’s fleet of maritime sealift and amphibious warships. The first two hulls, USNS Montford Point (T-ESD-1) and USNS John Glenn (T-ESD-2), were built as expeditionary transport docks that could ballast down into the water and act as an intermediary to transfer vehicles from cargo ships to Navy landing craft. The expeditionary sea base ships, ESBs, are based on the same design but, instead of ballasting down for surface connector operations, have a large flight deck for rotary wing operations and large cranes for small boat and unmanned vehicle operations.

Williams follows the first ESB, USS Lewis B. Puller (ESB-3), which began operating in the Persian Gulf last year following the retirement of Afloat Forward Staging Base USS Ponce (AFSB(I)-15). Due to the nature of its Persian Gulf missions, Puller‘s designation was changed from USNS to USS when it entered U.S. 5th Fleet.

“Potential missions, such as mine countermeasure operations and special operations forces staging, must be conducted by a warship under the law of armed conflict,” a Navy spokesman told USNI News last year.

Last week, Marine Corps Commandant Gen. Robert Neller said the service would like Williams to operate in the Mediterranean Sea. 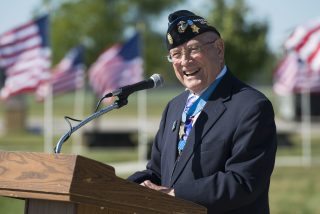 Medal of Honor recipient Hershel “Woody” Williams provides remarks as the featured speaker during the groundbreaking ceremony for a new Gold Star Family Memorial at the National Museum of the United States Air Force, Wright-Patterson Air Force Base, Ohio, on Sept. 28, 2017. US Air Force photo.

“I would like to see that ship there, because I think if I were [U.S. Africa Command commander Marine Corps Gen. Thomas] Waldhauser, [U.S. European Command commander Army Gen. Curtis] Scaparrotti, that would give me a great deal of flexibility in terms of where I could go or what I could do and maneuver around with the ship and the capability it has,” Neller said last week.

It’s unclear if Williams would also have to change its designation to USS from USNS.

While the class was originally developed for SOF and MCM applications, NAVSEA developed modifications for the ship-type to operate Marine MV-22B Osprey tilt-rotor aircraft from its flight deck.

Delivery of Williams comes on the 73rd anniversary of the Battle of Iwo Jima. The World War II battle was where the ship’s namesake, Marine Corps Reserve Chief Warrant Officer 4 Hershel Williams, performed actions that resulted in him receiving the Medal of Honor.

NASSCO is currently building the future USNS Miguel Keith (T-ESB-5), and the Navy hopes to buy a fourth in Fiscal Year 2019, according to its recent budget request.

The following is the Feb. 22, 2018 announcement from NAVSEA.

Delivery marks the official transfer of the ship from the shipbuilder to the Navy. ESB 4 will be owned and operated by Military Sealift Command.

“The delivery of this ship marks an enhancement in the Navy’s forward presence and ability to execute a variety of expeditionary warfare missions,” said Capt. Scot Searles, Strategic and Theater Sealift program manager, Program Executive Office (PEO) Ships. “Like the ship’s namesake, USNS Hershel ‘Woody’ Williams will exemplify the Navy’s commitment to service.”

USNS Hershel “Woody” Williams is named for Medal of Honor recipient, Hershel Williams. During the battle of Iwo Jima, then- Cpl. Williams bravely went forward alone against enemy machine gun fire to open a lane for the infantry. Williams continues to serve his fellow men and women in uniform through his foundation, the Hershel Woody Williams Medal of Honor Foundation, established to honor families who have lost a loved one in service to their country.

ESBs are highly flexible, modular platforms that are optimized to support a variety of maritime based missions including Special Operations Force, Airborne Mine Counter Measures operations, humanitarian support and command and control of traditional military missions. The ESBs include a four spot flight deck, hangar, and a versatile mission deck; and are designed around four core capabilities: aviation facilities, berthing, equipment staging support, and command and control assets. The ESBs will operate as the component commanders require, providing the fleet with a critical access infrastructure that supports the flexible deployment of forces and supplies.

As one of the Defense Department’s largest acquisition organizations, PEO Ships is responsible for executing the development and procurement of all destroyers, amphibious ships, special mission and support ships, and boats and craft.