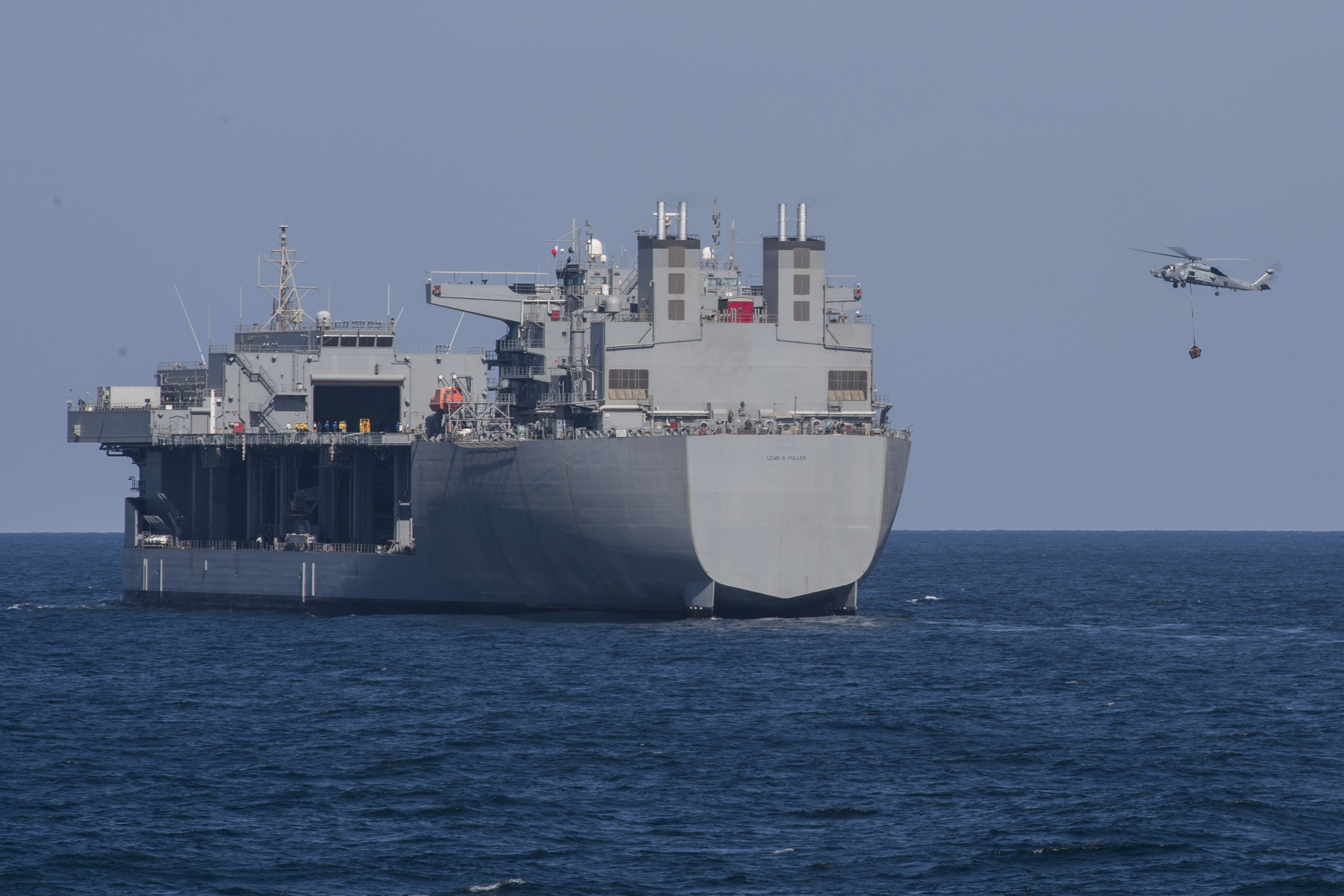 An MH-60R Sea Hawk helicopter assigned to the “Easyriders” of Helicopter Maritime Strike Squadron (HSM) 37 delivers cargo to the expeditionary mobile base USS Lewis B. Puller (T-ESB 3) during a vertical replenishment. Puller is deployed with the Theodore Roosevelt Carrier Strike Group to the U.S. 5th Fleet area of operations in support of maritime security operations to reassure allies and partners and preserve the freedom of navigation and the free flow of commerce in the region. US Navy photo

CAPITOL HILL – The Marine Corps intends for the next Expeditionary Sea Base ship, the future USNS Hershel “Woody” Williams (T-ESB-4), to operate in the Mediterranean Sea on its maiden deployment, Marine commandant said today.

Gen. Robert Neller said at an Amphibious Warship Industrial Base Coalition event this morning that having the second-in-class ESB in U.S. 6th Fleet wouldn’t rid the joint force of the need for an Amphibious Ready Group and Marine Expeditionary Unit (ARG/MEU) there, which the Navy and Marine Corps have been unable to dedicate to the region in the past several years. But “it would create a different dynamic for where forces were stationed,” he said, noting that Marines could move around the theater with all their gear more easily aboard this ship.

“I would like to see that ship there, because I think if I were [U.S. Africa Command commander Marine Corps Gen. Thomas] Waldhauser, [U.S. European Command commander Army Gen. Curtis] Scaparrotti, that would give me a great deal of flexibility in terms of where I could go or what I could do and maneuver around with the ship and the capability it has,” he said.

The first ESB, USS Lewis B. Puller (ESB-3), is on its maiden deployment in U.S. Central Command. Puller was redesignated and commissioned a warship when it arrived in the CENTCOM area of responsibility last summer, and it is unclear if Williams would receive a USS warship designation upon commencing operations in 6th Fleet or not.

Williams was christened in October at builder General Dynamics NASSCO in San Diego and is expected to deliver to the fleet this year. The future USNS Miguel Keith (T-ESB-5) will deliver next year, and the Navy included funding for an ESB-6 in its Fiscal Year 2019 budget request released earlier this week. 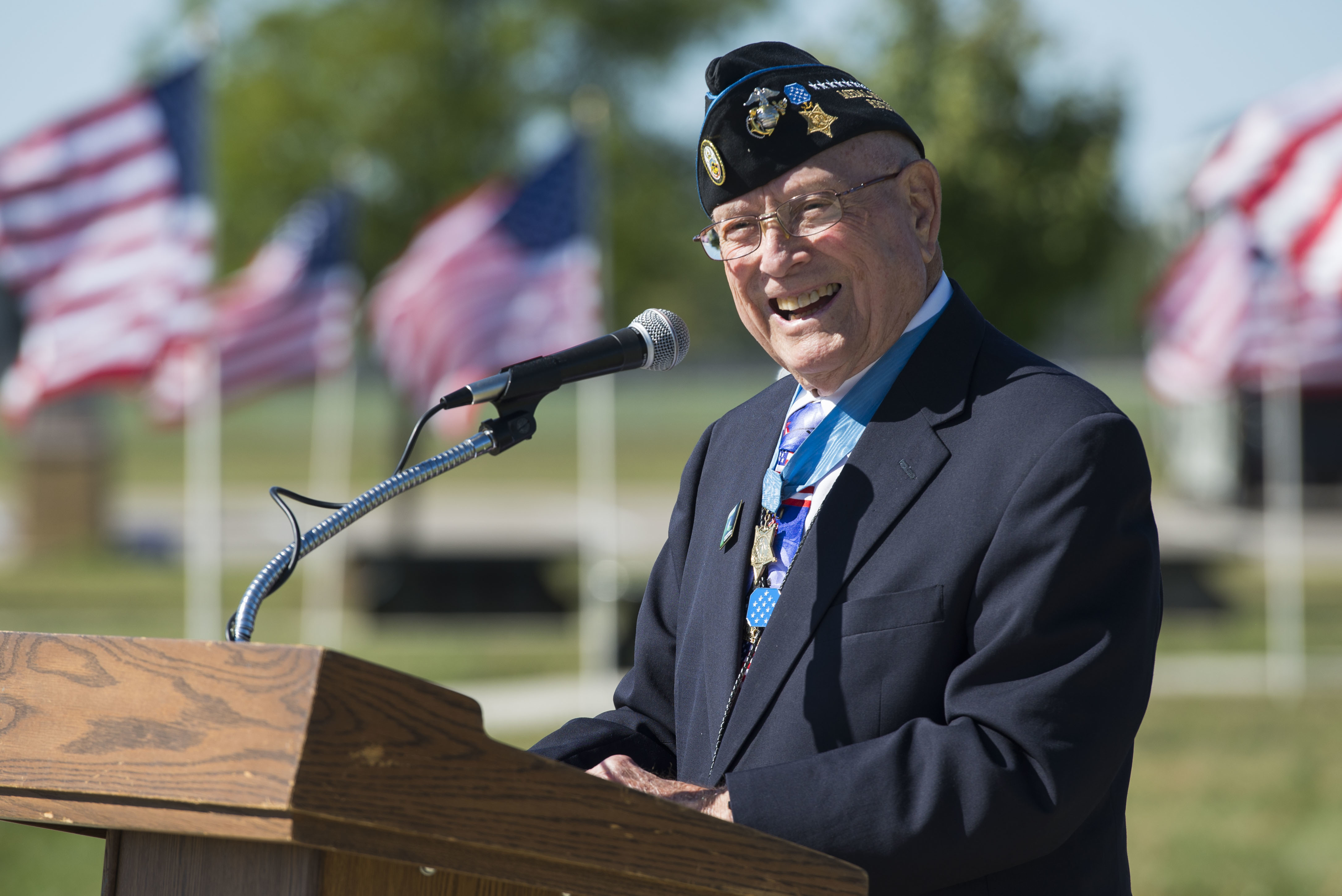 Medal of Honor recipient Hershel “Woody” Williams provides remarks as the featured speaker during the groundbreaking ceremony for a new Gold Star Family Memorial at the National Museum of the United States Air Force, Wright-Patterson Air Force Base, Ohio, on Sept. 28, 2017. US Air Force photo.

Williams is named after retired Marine Corps Reserve Chief Warrant Officer 4 Hershel Williams, who received the Medal of Honor for his actions during the Battle of Iwo Jima in World War II and is the only living Marine Corps Medal of Honor recipient from that battle. Williams recently was honored at the 2018 Super Bowl by conducting the coin toss to start the game.

The Expeditionary Sea Base was first developed as a derivative of the Expeditionary Transfer Dock and was meant to support aerial mine countermeasures operations and special operations missions. The Marine Corps has become a big proponent of the ship and hopes to leverage its massive flight deck and small boat support capability in operations around the globe. The Middle East was identified as the first location for the ship to operate, but other ideas have been kicked around such as the Mediterranean, the Gulf of Guinea, the Horn of Africa and more.