However, it is not clear how the Navy would support an average of 131 ships deployed with that sized fleet – the service averages 100 ships deployed currently, and under current force generation plans 46 more ships would not equate to 31 more ships ready to be deployed overseas. The Navy did not immediately respond to USNI News regarding specific details on how it would support a 31-percent increase in deployed ships on such a short timeline.

To achieve the 46-ship buildup in the next five years, the Navy has added 11 new ships to its shipbuilding plan in that five-year timeframe and will in 2019 pay to extend the service lives of six cruisers, four mine countermeasures ships and a Los Angeles-class attack sub.

Under this plan, the Navy would have 326 ships in Fiscal Year 2023 through both new construction and service life extension programs.

In FY 2019 specifically, the Navy requested $21.9 billion to buy 10 ships: two Virginia-class attack submarines, three Arleigh Burke-class guided-missile destroyers, one Littoral Combat Ship, one Expeditionary Sea Base, two oilers and a fleet tug. This represents three ships more – a DDG, an ESB and an oiler – than the Navy had previously planned to buy in FY 2019, according to its last Future Years Defense Plan released two years ago. Last year the Navy and the Defense Department as a whole did not release estimate for future-year spending levels.

Over the FYDP, from FY 2019 through 2023, the Navy has added 11 ships compared to previous shipbuilding plans: four DDGs, two ESBs, three oilers, one T-ATS tug and salvage ship and one T-AGOS ocean surveillance ship. When the Navy first announced its intentions to build to a 355-ship fleet, it suggested that DDGs, attack submarines and amphibious ships would be the first programs to see a boost in procurement rates. Though the ESB cannot replace amphibious ships, it can support some Marine Corps operations at sea and is already in high demand around the world after the first ESB made its operational debut in U.S. 5th Fleet last year. 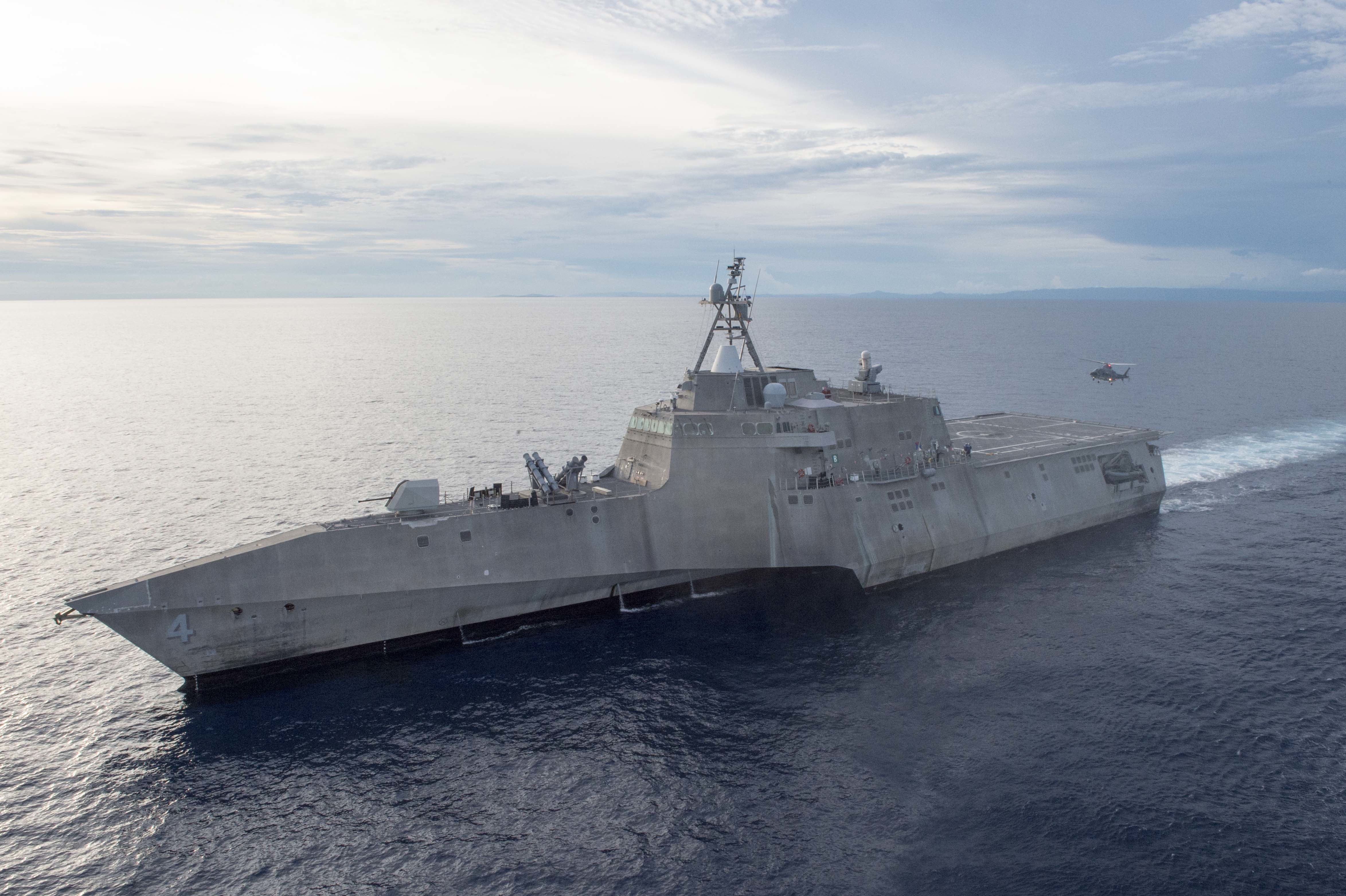 A helicopter from the Philippine navy prepares to land on the flight deck of the littoral combat ship USS Coronado (LCS 4) during an exercise for Maritime Training Activity (MTA) Sama Sama 2017. US Navy Photo

The Navy opted to buy just one LCS – which it did last year, but then promptly requested a second LCS the following day. Many lawmakers expressed support for a third LCS in 2018 – though Congress still has not passed a defense spending bill for this year – to support the industrial base. The Navy will upgrade to the next-generation frigate (FFG(X)) design in 2020, and both LCS builders intend to compete for the frigate contract. However, the two yards – Austal USA in Alabama and Marinette Marine in Wisconsin – have said they need a minimum of three hulls a year between the two yards to stay viable until the frigate competition is sorted out. It is unclear what would happen to the yards if the Navy did, in fact, only buy one LCS this year, though lawmakers may likely intervene again this year.

Despite last year’s concerns from lawmakers and industry, Rear Adm. Brian Luther, deputy assistant secretary of the Navy for budget and director of the fiscal management division on the chief of naval operations’ staff (OPNAV N82), told reporters today that the one-ship request was a sufficient bridge from the Flight I LCS portion of the small surface combatant to the follow-on guided-missile frigate portion of the SSC acquisition program.

“In building the ship acquisition plan, [the LCS portion of] small surface combatants has a requirement for 32 ships. The programmed ship in ‘19 is the 32nd [LCS] small combatant ship, so we feel it meets the requirement and it’s a sufficient bridge to get us to the FFG(X) program,” he said.

Though the Navy’s shipbuilding and conversion account topline is high – historical averages this decade have hovered around $15 billion a year – much of the spending doesn’t directly lead to new ships being delivered to the Navy in the near-term. The Navy is investing $3 billion into early efforts for the future Columbia (SSBN-826), the lead ship in a new class of ballistic missile submarines. The service is also spending $7.2 billion on just two Virginia-class submarines, which cost about $2 billion apiece. The rest of the spending – about $3 billion – goes to “related Advance Procurement and economic order quantity funds” that support the start of a new five-year multiyear procurement contract.

The two SSNs in 2019 will be the first two Block V boats, and the second hull of the year will be the first to incorporate the Virginia Payload Module that adds extra length and 28 additional Tomahawk cruise missile tubes. Lawmakers have given the Navy broad authorities to spend money in a way that leverages efficiencies across the SSN, SSBN and aircraft carrier programs, though Luther told USNI News that the spending was directly related to the SSN production line. Luther added that the Navy was spending $1.6 billion on advance procurement for the next aircraft carrier after Enterprise, CVN-81.