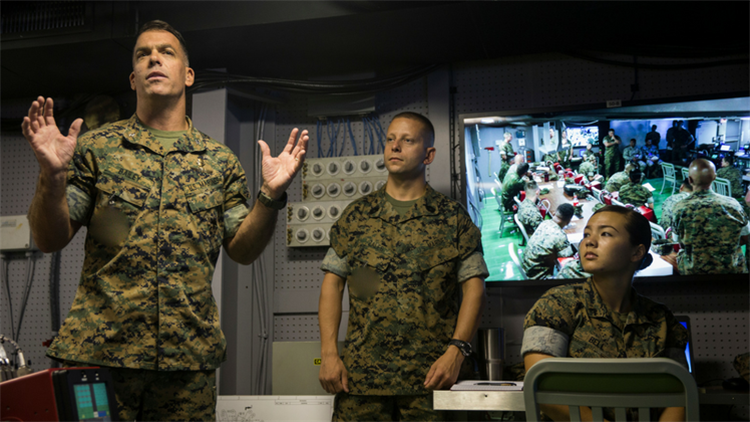 SAN DIEGO, Calif. — Tucked inside a pair of shipping containers parked not far from Camp Pendleton’s training beaches is a test-bed where a command staff can practice landing Marines ashore – all without stepping aboard ship.

The Landing Force Operations Center lab is a “high-fidelity, high-functioning environment“ designed to mirror the LFOC space that serves as a key command-and-control space for a Marine air-ground task force aboard a big-deck amphibious assault ship, officials told an audience Tuesday afternoon at WEST 2018, a conference co-hosted by the U.S. Naval Institute and AFCEA.

Created last fall by engineers at Marine Corps Tactical Systems Support Activity, the “LFOC Ashore” is equipped with the same computer networks – the Consolidated Afloat Network and Enterprise System (CANES) – that’s on a ship, as well as workstations, radios, speakers and even wires and bulkheads that replicate the afloat center’s cramped, darkened space. “It looks like you are aboard a ship,” said Dave Yergensen, a senior principal engineer with MCTSSA.

Marines already have penned a nickname for it: USS MCTSSA.

Just recent months, Yerensen said, the LFOC lab has hosted several Marine Corps units and Navy amphibious commands and in December got into the play with Marines during 1st Marine Division’s exercise Steel Knight. This month, the 13th Marine Expeditionary Unit is using it during its MEU exercise.

The lab can flex to the unit’s particular needs, integrating its command, control, communications, computers and intelligence systems with the systems organic to the ship. “We want the warfighter to focus on the mission,” Yergensen said.

Training at the lab gives Marines a chance to get familiarized with the command and control equipment and systems they will have to use while at sea – and these can vary by L-class ship – and also sort out and resolve any issues with dry-runs before they get underway for training or deployment. “We want them to do that before we ever get aboard a ship,” Yergensen said.

The continued shortage of availability for Marines to get aboard a Navy amphibious ship for training – especially outside of a MEU training cycle – is a big driver behind the lab’s creation. It’s not unusual for Marines to step onto their amphibious ship for a training period that’s already jam-packed with training missions and tasks but with little if any familiarity with what systems the ship has, or lacks – and how those will mesh with the Marines’ organic systems.

“We are able to fill a gap” Maj. Paxton Miller, MCTSSA’s naval systems integration officer, told the audience. The idea is “to ensure that when the MEUs go out that their equipment is going to work on ship.”

The LFOC lab can tailor the MAGTF Afloat integration environment to the particular MEU or unit using it for training, so it would mirror the particular L-class ship they will train or deploy on. “When MEUs come, we will load that environment at MCTSSA and evaluate it with them,” Miller said.

“It’s really going to continue to mature,” he added.

MCTSSA has leaned on input and feedback from Marine communication detachments, who perhaps more than others are keenly familiar with amphibious ships and “are great liaisons with the Navy,” Paxton said, adding that “having that MarCom detachment has been helpful.”

MCTSSA, which falls under the Quantico-Va.-based Marine Corps Systems Command, has absorbed all the costs of the LFOC lab at Camp Pendleton. It’s the only one of its kind, but so far it is drawing interest from around the Marine Corps, including East Coast MEUs, he said.