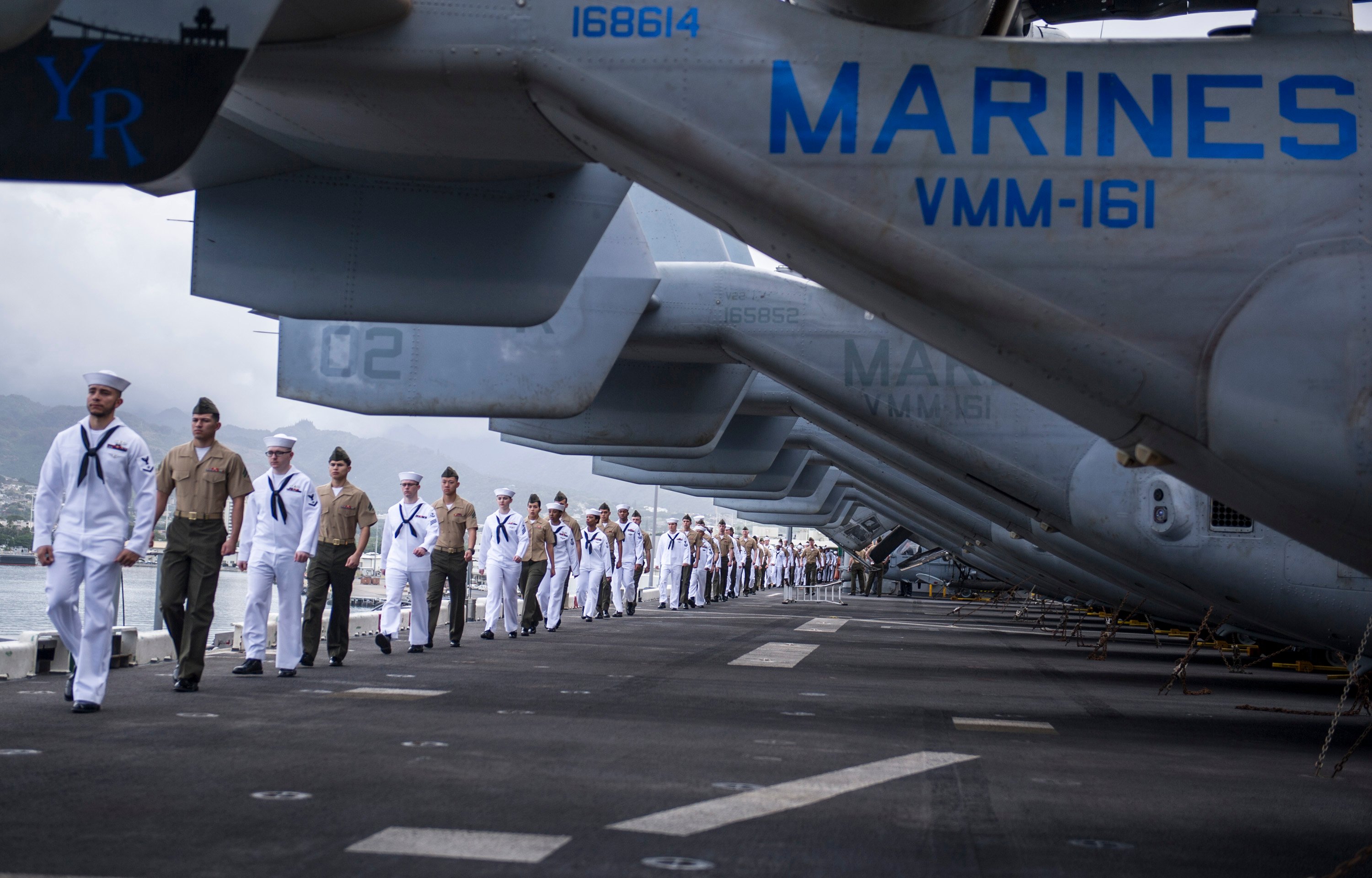 Sailors and Marines assigned to the amphibious assault ship USS America (LHA-6) secure from manning the rails on Jan. 25. US Navy Photo

“Our blue-green team proved themselves time and time again to be a professional and versatile contingency response force whether it was at sea, in the sky, or on land,” Capt. Rome Ruiz, commander of Amphibious Squadron 3, said in a Navy statement.
“As an amphibious task force, our ships gained extensive experience by working with various partner nations and ship platforms, which contributed to the increasing strength of our combat power. I am proud to have been part of this deployment and proud to have served with this talented team.”

“What we have accomplished is something to be proud of. We showed what our MEU can do in a contested environment,” Col. Joseph Clearfield, the 15th MEU commander, said in a Navy statement as the force left Guam for California. “All the time and hard work put in since we began our workup cycle is why we are a ready global response force.”

Sailors and Marines with the America ARG/MEU supported a range of missions during the deployment in the U.S. Central Command region as well as in 5th Fleet, 6th Fleet and 7th Fleet. Missions included the bilateral amphibious exercise Alligator Dagger in December, where they worked with French troops and Task Force 51 and 5th Marine Expeditionary Brigade off Djibouti. The America ARG/MEU also conducted maritime security missions in the region. America also helped support the crew of the USS John S. McCain (DDG-56) after the ship collided with a container ship in the Malacca Straits.

“Since the ship left for her first operational deployment seven months ago, this crew has grown exponentially in skill and professionalism,” said Capt. Joe Olson, America’s commanding officer. “Our Sailors and the Marines of the 15th MEU fulfilled their tasking proficiently, effectively, and with heart.” During the seven-month deployment, America traveled 42,911 nautical miles and conducted 5,075 flight deck landings, takeoffs and vertical replenishment drop-offs and pick-ups, according to the Navy.

“Our sailors and Marines did an absolutely fantastic job this deployment,” Cmdr. Theodore Essenfeld, Pearl Harbor’sccommanding officer, said in a Navy statement.
“I could not have asked for a better team to come together to complete each mission we were tasked with. During Iron Magic and Alligator Dagger, the coordination between the Navy-Marine Corps team effectively projected power from the sea and ashore. At the same time, we gained the knowledge and training to make us a more cohesive team.”

“We had units from the ARG/MEU team operating in several countries and two different fleets simultaneously,” said Capt. Pete Collins, commanding officer of San Diego. “The spread of personnel, geographic influence and contributions to the fight in theater was well received and important to several peripheral missions making this a successful deployment for the Blue-Green team.”

While operating in the Mediterranean, the San Diego and embarked 15th MEU detachment provided intelligence, surveillance and reconnaissance capability to support U.S. Africa Command missions in the region. The force also was on standby to evacuate any casualties or recover downed aircraft.