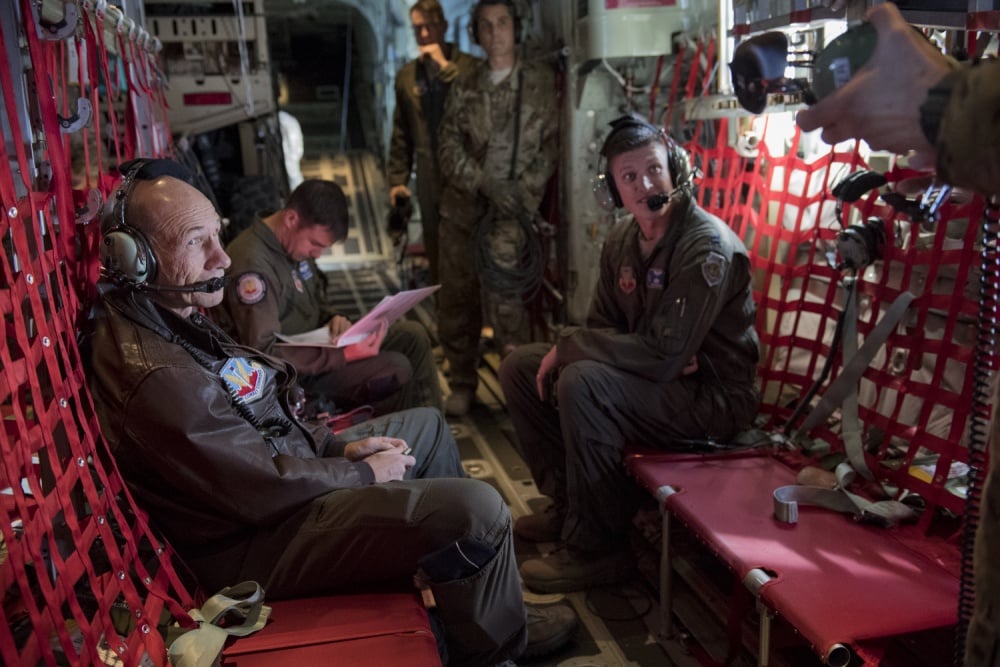 Speaking Thursday at the Brookings Institute in Washington, Gen. James M. Holmes, commander of the Air Force’s Air Combat Command, based at Langley Air Force Base in Virginia, said while the U.S. military is still without peer, adversaries are becoming more adept at challenging U.S. operations and making combat scenarios uncomfortable,

What’s needed today is for all service branches to embrace the idea of the next battles fought will be multi-domain. In other words, land, air, sea, and cyber will all be part of the battle. Clear lines separating friend and foe will likely disappear as the enemy improves its ability to disrupt communications and use long-range weapons to hit U.S. staging grounds.

For many in the audience, Holmes’ comments harkened back to the Pentagon’s quest for a Third Offset strategy. When Michael O’Hanlon, a senior foreign policy fellow at Brookings, asked if multi-domain battle strategy superseded or was just the same philosophy rebranded to accommodate a new administration?

Holmes balked at the idea one replaced the other, but conceded, “I haven’t heard that term used a lot, but I think I still hear the ideas talked about in the halls of the Pentagon.”

The shift away from a Third Offset strategy, according to Holmes’ mind, is not political, but instead is based on to need to respond to how fast adversaries – including near peers of China and Russia, and non-state actors such as terrorist organizations – can adapt to U.S. technology or tactics.

When rolled out two years ago, the Third Offset was by design taking a long-term view of how the U.S. military could remain without peers, evaluating potential threats expected decades in the future.

“The idea of the Third Offset I think it’s is important to think about,” Holmes said. “It’s unlikely we’re going to have a Third Offset that’s going to last 25 years like the other ones did.”

The First Offset occurred during the early Cold War years of the 1950s and 1960, as the U.S. used technological advances in nuclear power and weaponry to create parity with the larger Soviet Union military, according to a Department of Defense explainer released in March 2016. The Second Offset occurred in the 1970s and 1980s and was when the stealth and precision weapons used today were first developed.

The world in which the U.S. now prepares to deter near-peer adversaries, or fight and defeat if needed, is one that’s very different from a generation ago, Holmes said. To illustrate the difference between then and now, Holmes mentioned how 27 years ago Thursday, the first Gulf War was in its ninth day. Up to that point, U.S. forces had flown 2,000 sorties – a month’s worth according to Holmes.

The message to great powers and adversaries alike was clear, Holmes said. The Navy and Air Force can maintain absolute air superiority, allowing Army and Marine Corps forces to dominate the land.

“I would say now there are no boundaries on the battlefield or that they mean a lot less. There are no hiding places, there are no places you can hide from that unblinking eye of multi-domain awareness. And there are no sanctuaries where we can work through a port, unload our forces, get them ready for battle, and then move them into a battle area,” Holmes said.
“Our forces now know that from their garrisons before they start to move, they’re vulnerable to at least non-kinetic fires and maybe kinetic fires.”

The strategies and equipment used by adversaries today are much faster than what had been the case during the 1990s and early 2000s. The U.S. military has to change the way it plans for the future, Holmes said. “For the services, it’ll be as we contemplate going from research and development in programs, will we go ahead with programs we have planned for many years or will we reevaluate those programs we haven’t started, and try to decide how they fit into the world we envision fighting in.”