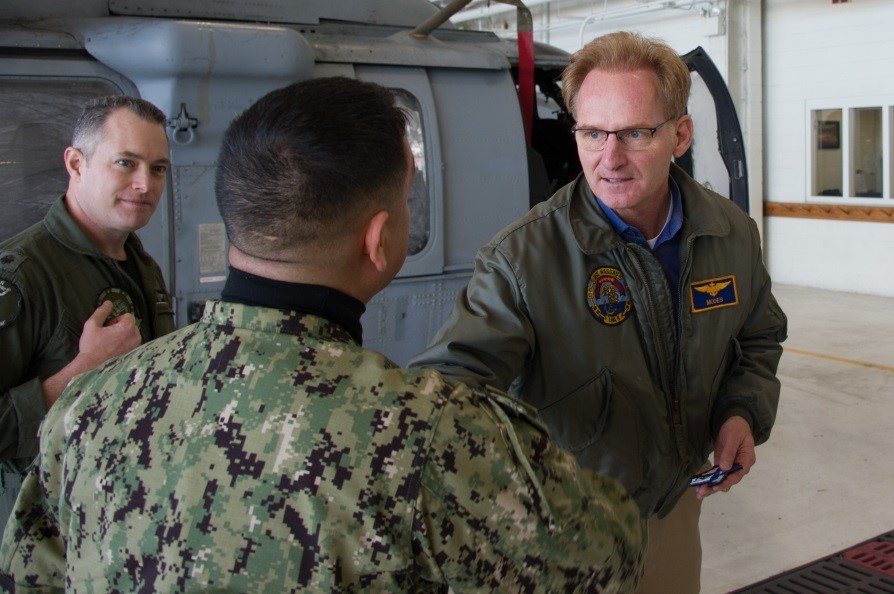 Undersecretary of the Navy Thomas B. Modly, right, shakes hands with Master Chief Joe Hernandez, command master chief of Helicopter Sea Combat Squadron (HSC) 7, center, as he concludes his visit to the squadron on Dec. 13, 2017. US Navy Photo

This post has been updated to include a link to Secretary Modly’s full remarks, which can also be found here.

ANNAPOLIS, Md. –– Ex Scientia Tridens, U.S. Naval Academy motto, roughly translates to Through Knowledge, Sea Power and appears to be the core of how Tom Modly is approaching his new role as Under Secretary of the Navy.

The Navy and Marine Corps need to encourage education about the world, curiosity about surroundings, and a willingness to take chances and learn from mistakes, Modly told USNI News on Friday following his swearing-in ceremony in the academy’s Memorial Hall.

“Ex Scientia Tridens should be our battle cry as we think about and execute the strategies for Navy and Marine Corps of the 21st Century,” Modly said during his prepared remarks.
“It is only through the elevation of knowledge as a core characteristic of the Naval Service that we will maintain our strategic and competitive advantages.”

Acknowledging virtually every inch of the academy’s surroundings is draped with significance, Modly focused on a few poignant reminders of his time as a Midshipmen. Modly took his oath of office a few paces away from where he took his original oath of offices during his plebe summer in 1979.

Modly stood in front of a replica Commodore Oliver Hazzard Perry’s famous “Don’t Give Up the Ship” flag, emblazoned with the dying words spoken by Capt. James Lawrence, who reportedly uttered the phrase as his ship USS Chesapeake was overrun by British in 1913.

A few months after Lawrence’s death, Perry flew the flag at the Battle of Lake Erie in the War of 1812, a resounding victory for Perry and the U.S. Navy.

“As a native of Cleveland, Ohio, and an avid Cleveland sports fan, the flag is extremely ironic to me as it proves what I thought was a virtual impossibility,” Modly said.
“The reality that any home team can achieve decisive victory on the shores of Lake Erie.”

In the 200 years since Lawrence’s famous quote was first spoken, “Don’t Give Up the Ship” has become a rallying cry for the Navy, Modly said.

“As I prepared to take on this assignment, I spoke with many experts and observers of our Navy and Marine Corps who fear that we are approaching the point of creating a hollow force,” Modly said.
“A force that is tired and under-equipped, and not sufficiently trained, but also on that is being asked to do more and more with fewer platforms, and less rest, and no relief in the operational tempo.”

Secretary of the Navy Richard V. Spencer, on hand to swear-in Modly, introduced his undersecretary saying, “I couldn’t ask for a better wingman.”

After the ceremony, Spencer told USNI News recruiting and retaining sailors and Marines was a major focus for his office. With Congress intending to increase fleet size, Spencer said the Navy and Marine Corps must also increase in size.

“While we surely must invest in more ships, and aircraft, and submarines, and armored vehicles, and new weapons systems, nothing will be more important than the investment that we make in knowledge and on creating a force made up of people who thirst for it,” Modly said.