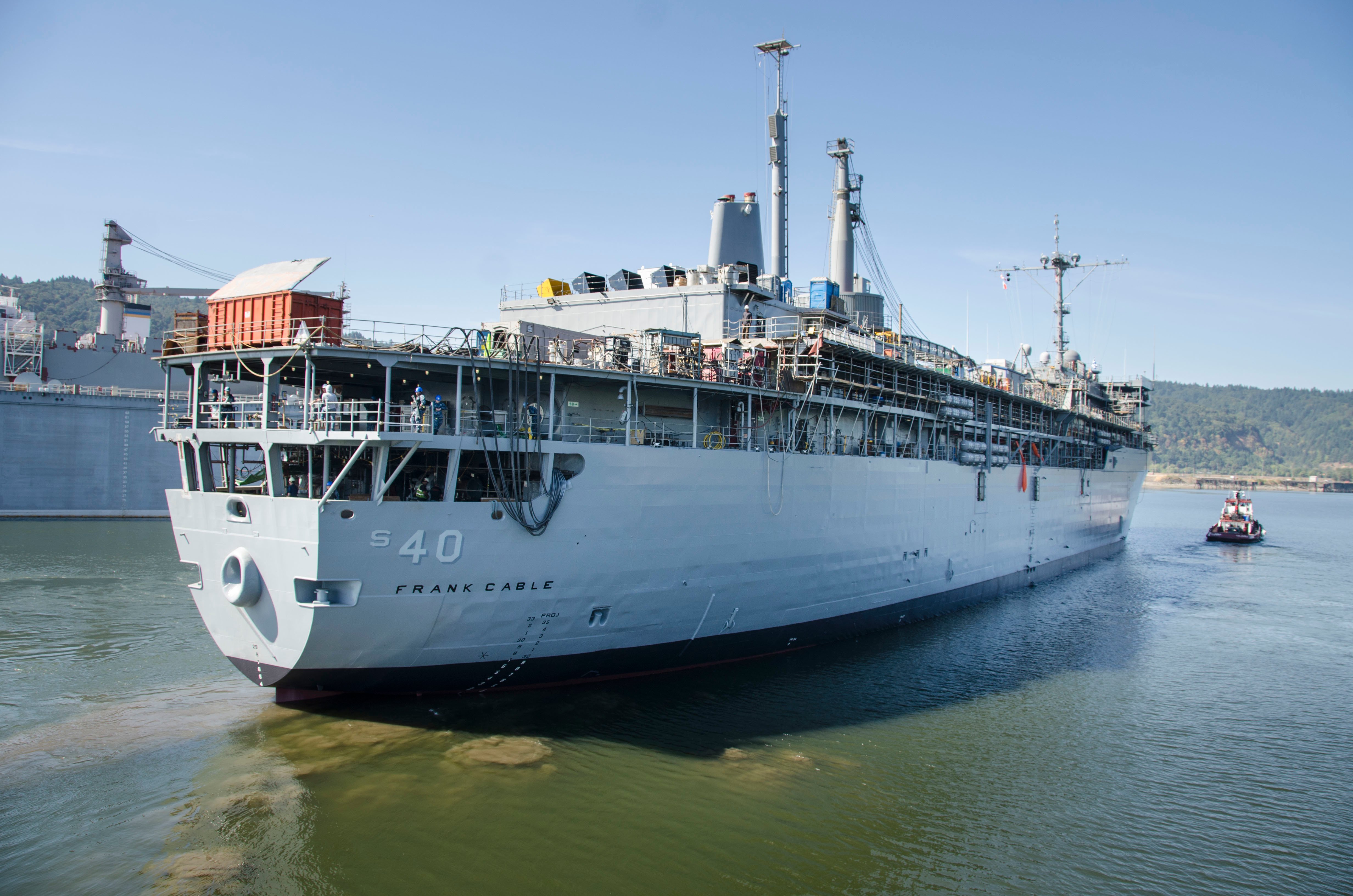 The submarine tender USS Frank Cable (AS 40) sails from her position in Vigor Shipyard’s dry dock to moor pierside during a fleeting exercise on Sept. 15, 2017. Frank Cable is in Portland, Ore., for a scheduled dry-dock phase maintenance availability. US Navy photo.

Submarine tender USS Frank Cable (AS-40) completed an eight-month dry-dock repair availability in Oregon and is headed back to Guam to continue fleet support operations there.

“The Navy and Military Sealift Command (MSC) crew worked very hard during this shipyard period to maximize repairs and material conditions,” MSC Ship’s Master Capt. Patrick Christian said in a Navy news release.
“Now we are ready to rejoin the fleet and get back on our mission.”

The split crew includes MSC civilian mariners who operate and maintain the ship at sea, and Navy sailors who protect the ship and provide repair and logistics support to deployed submarines. Frank Cable works alongside sister ship USS Emory S. Land (AS-39) in Guam, typically with one tender working at the island and one providing services to deployed subs and ships at sea.

Some Frank Cable sailors remained in Guam during the maintenance period and were temporarily assigned to Emory S. Land. They will rejoin Frank Cable while the ship is underway in the voyage back to Guam.

During the transit back, sailors will have to requalify their work centers, and the MSC crew will have to test the tender’s updated capabilities.

“We’re going 21 knots right now,” Christian said in the news release, noting the ship’s speed as it departed the Vigor Industrial shipyard in Oregon.
“Before we could not meet our designed speed and now we can. We are going to do a proof of concept for our submarine and logistics support capabilities, then we will return to our home port of Guam as Lead Maintenance Activity.”

Frank Cable Commanding Officer Capt. Jeff Farah added in the release, “the majority of Repair Department sailors stay behind for the repair mission, as part of the two-tender concept. For our sailors underway, the focus is to build that repair proficiency back, before we return to Guam.”