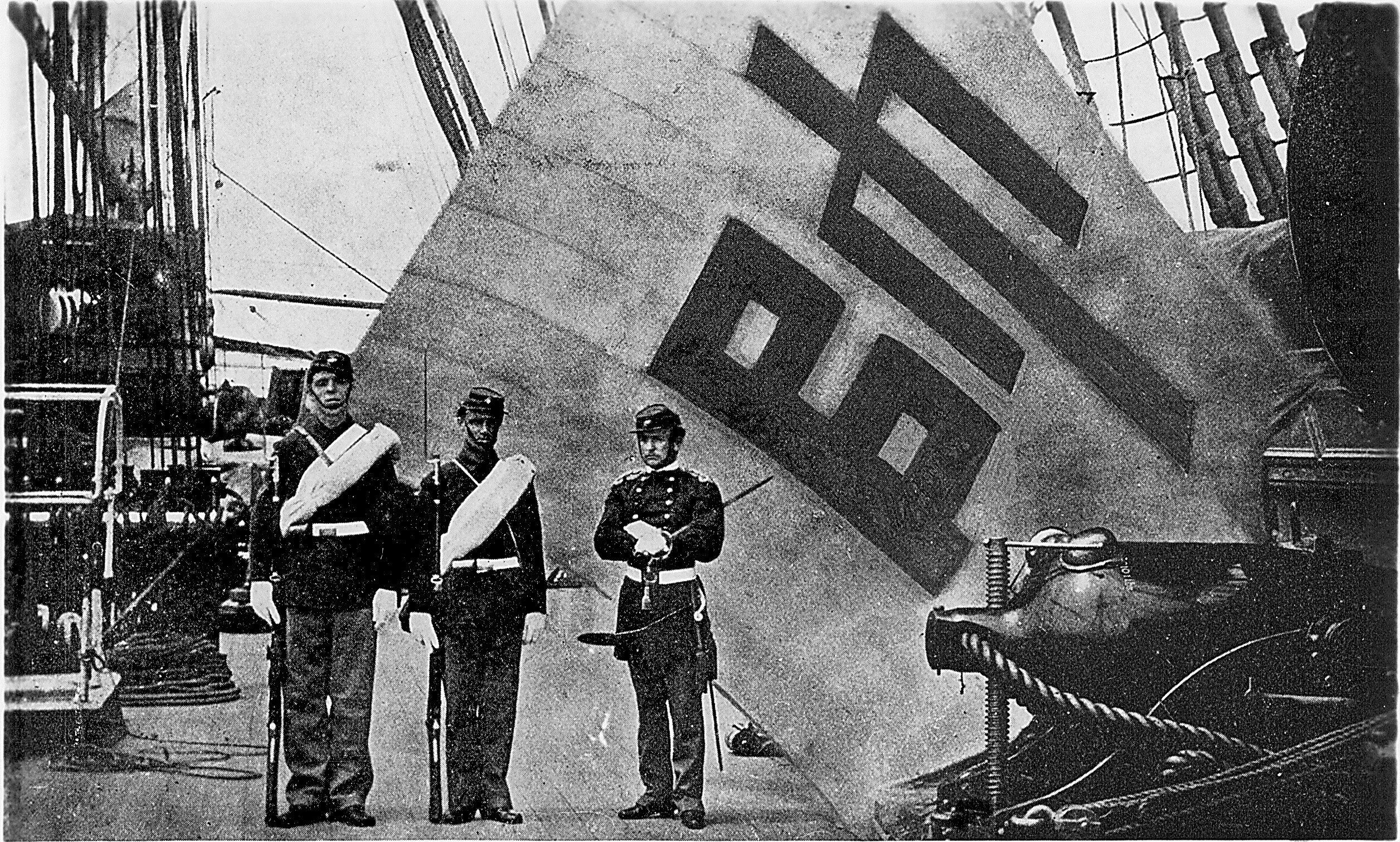 ANNAPOLIS, Md. — Long forgotten flags captured by U.S. forces during an obscure 19th-century military action in Korea were uncovered during restoration work at the U.S. Naval Academy in Annapolis last week. The well-preserved flags were rediscovered in the academy’s Mahan Hall when British ensigns seized as trophies during the War of 1812 were removed from their display cases.

When the display cases were opened for the first time since 1920, staff from the Naval Academy Museum found several dozen flags hidden behind the framework including the Korean standards that are still vivid.

Museum officials told USNI News the flags probably were stashed behind other trophies on display because there was a shortage of storage space. Over the years the location of the flags faded from memory. Current museum staff suspected the flags may be somewhere on the academy yard because they were listed in documents but no one was certain where they were.

The flags had been taken during a U.S.-Korean conflict linked to North Korea’s supreme leader Kim Jong Un according to Pyongyang. 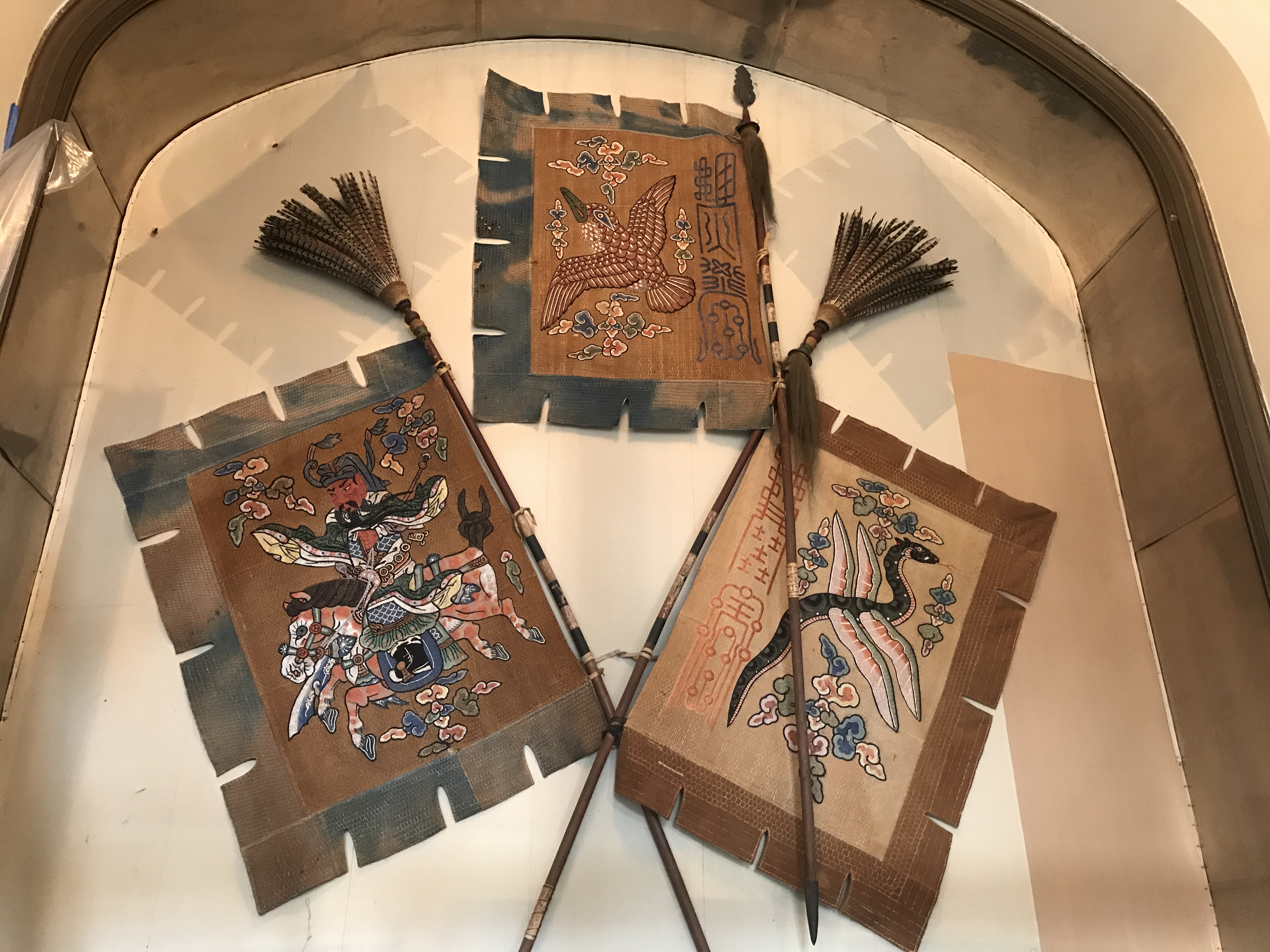 In 1866, the American merchant ship USS General Sherman sailed to Pyongyang in attempt to open Korea for trade. The Koreans suspected that the true mission of the General Sherman was to loot their temples so they set the ship on fire and massacred the crew. The incident is still celebrated in North Korea as a strike against American imperialism with the claim that Kim Ung-u, a direct ancestor of Kim Jong Un, planned and led the attack though there is no historical evidence of his involvement.

In 1871, a U.S. expedition of five warships approached the Korean coast to establish diplomatic relations and inquire about the fate of the General Sherman. After the Koreans fired on the ships, the Americans launched an assault in which U.S Marines captured several coastal forts and removed the flags. 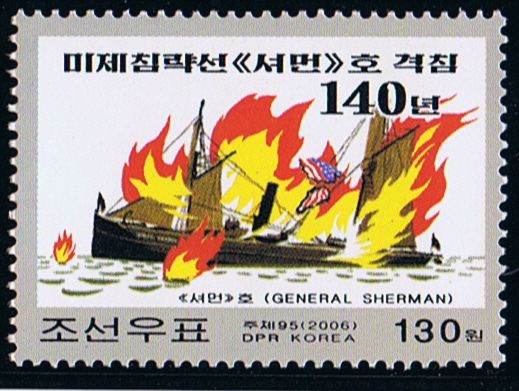 The trophies were sent to Annapolis in accordance to an order issued by President James K. Polk in 1849 stating that all enemy flags, standards, and colors were taken by the Navy be deposited at the academy. They were listed with their provenance along with other flags taken from actions against Great Britain, Mexico, the Confederacy and even pirates in the Catalogue of the Flags in the Naval Institute Hall, U.S. Naval Academy published in 1888.

The collection of flags was first placed into storage in 1901 when the Naval Institute Hall was demolished. A major preservation effort took place in 1911 to save many of the flags in that were starting to deteriorate. They were then placed on the ceiling of the auditorium in Mahan Hall before it was decided that they needed to be moved into cases to better protect them. Photographs of the Korean flags on display appear in a 1913 catalog that was updated to include the trophies taken during the 1898 Spanish-American War. Plans to construct more cases to keep all the flags on exhibit never came to fruition, resulting in many flags like the Korean standards being pushed to the back of cases and covered as other flags were put on permanent display.

In the years that followed, all but one of the Korean flags were forgotten. The approximately 15-foot square flag belonging to General Uh Je-yeon who was killed during the 1871 conflict remained on display at the academy until 2007 when it was sent to Seoul on long-term loan at the request of South Korean officials.

Prior to the loan arrangement, U.S. Senator Wayne Allard had proposed trading the general’s flag for USS Pueblo that had been captured by North Korea in 1968 and exhibited near the site of General Sherman incident. The State Department rejected the proposal as being unworkable due to the many complications pertaining to U.S.-North Korean relations. Additionally, the government still maintains that the Pueblo is illegally seized U.S. property and should be returned without barter.

All the flags found in the display cases at the Naval Academy have been removed and are awaiting preservation. The only flags now missing from those listed in the 1888 catalog are the standards captured during the Mexican-American War (1846-1848) which were returned to Mexico as a goodwill gesture during the Truman administration.