WASHINGTON, D.C. — The Navy’s multi-pronged efforts to address hypoxia, decompression sickness and other physiological episodes (PEs) in its F-18 and T-45 aircrew are showing positive results, with the number of PE events down in most aircraft types and the T-45C Goshawk trainers set to resume full operations by the end of the month, according to the commander of Naval Air Forces.

On the T-45s specifically – used to teach new pilots how to fly before sending them to Fleet Replenishment Squadrons– Shoemaker said modifications have been made to 143 aircraft since an operational pause was ordered in April. After a halt to all operations, and then a resumption of operations with severe altitude and other restrictions, the Air Boss said the T-45 community should be back to pre-operational pause pilot production rates by the end of the month.

Since T-45 flights resumed after the pause, “over 15,000 hours flown, we’ve had five what I’ll call PEs,” he told USNI News following a House Armed Services readiness subcommittee hearing.
“Now of those, the medical folks, one was clearly, there was a dehydration issue with one of the aircrew. The other one was a fatigue issue. And the other one was a, in terms of the procedure for operating the OBOGS [onboard oxygen generation system] on deck, there was a mistake made in the procedure. So really there were two PEs in 15,000 flight hours, almost 13,000 sorties. So I think we’re in a good spot.”

“Again, we never found a smoking gun,” he said, noting a complicated interaction between conditions on the airplane and conditions within the aircrew personnel that create the potential for PEs to occur.
“We’ve made a lot of changes in the (OBOGS) system to address what we thought were the potential causal factors, and I think we’re in a good spot in the T-45.”

Shoemaker couldn’t point to any particular change the Navy had made in its aircraft that may have led to a decline in PE events. He noted that sieve filter materials in the OBOGS system for the T-45 and the F-18s had been replaced, which led to a trend in the right direction but wasn’t definitively causal.

“If you look at the trends – if you separate breathing gas from the Environmental Control pressurization stuff – the trends for breathing gas across the force are down. That’s the only issue we had with T-45s, and that I think is a good news story,” he said. Hypoxia, which results from the aircrew receiving insufficient or contaminated oxygen, is the only type of PE event the Navy has seen with the T-45 and accounted for about a quarter of PE events in the F-18 Hornets and Super Hornets and EA-18G Growlers, the Navy previously told USNI News. Decompression sickness-like symptoms from fluctuations in cabin pressure with the Environmental Control System accounted for the remaining 75 percent of events in the F-18 jets.
“In the Super Hornet world, we’re about half the trend we were from about a year and a half ago. It’s come down 50 percent, which is good. In the legacy Hornets, it’s sort of trend up just a little but, but it’s still about the same rate as the Super Hornets. Very low, like one in 3,000 sorties will we see an OBOGS or breathing air-related event.”

While the number of PEs occurring in the T-45s now is down, the Navy is still bracing for a significant shortfall to its squadrons and junior officers due to about eight months of no new pilot production, Shoemaker said.

“Production is in a good place right now,” he said, noting that 32 student pilots just recently qualified on carrier USS Abraham Lincoln (CVN-72) and even more are currently working on ground-based qualifications.
“Now, as we deal with the shortfall that we created with – essentially, by the time we get back to full production, almost eight months of non-production, all in TACAIR communities – there’s no disruption right now to the fleet because there were still plenty of aviators in our [Fleet Replacement Squadrons] moving to the fleet. But we see that getting probably most acute, or when we’ll see that gap peak is in early ’19 – spring of ’19 to summer of ’19.” 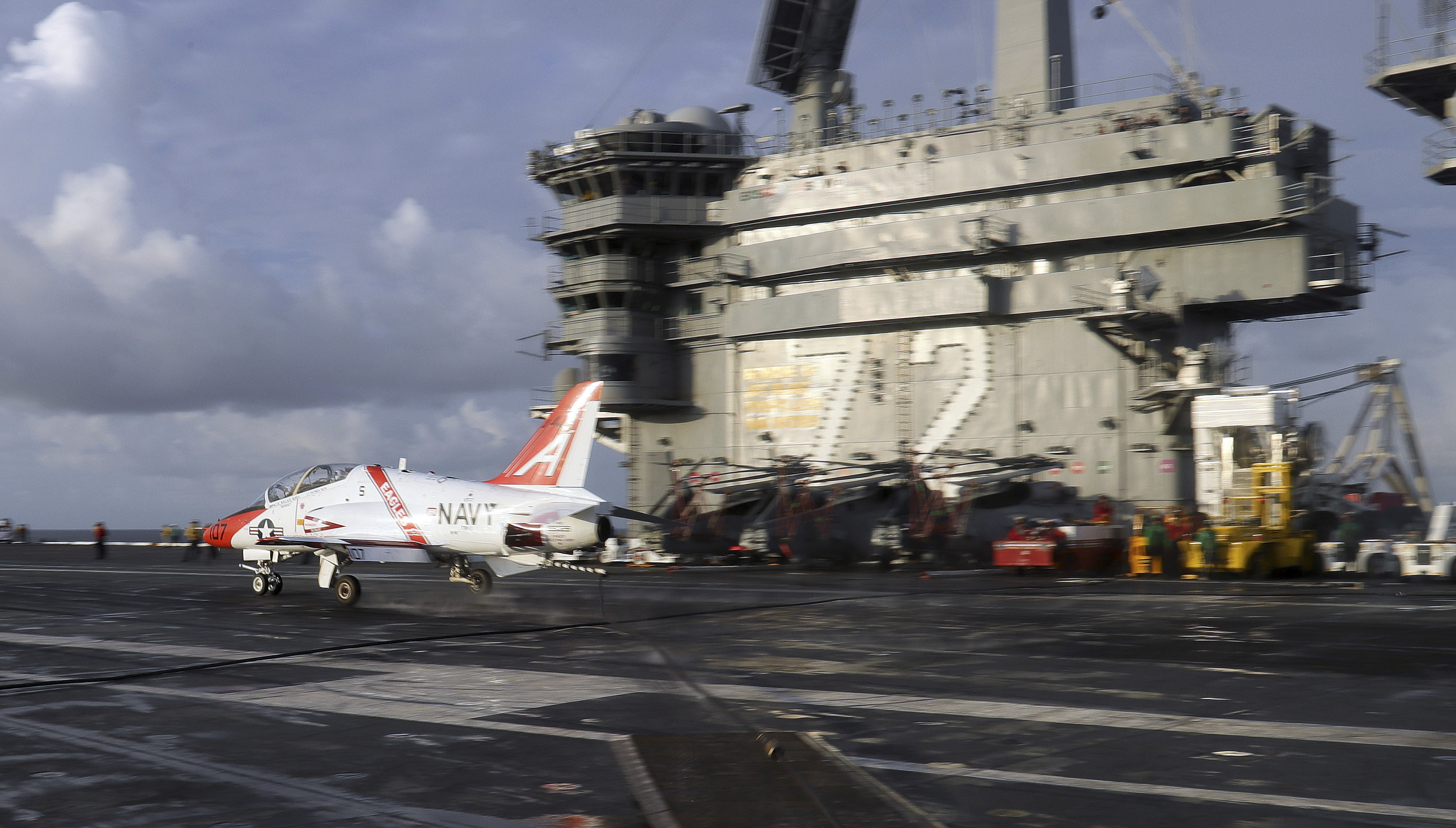 Shoemaker said in other cases recently where Fleet Replacement Squadrons haven’t kept up with fleet requirements, some squadrons have seen gaps in their manning during the maintenance phase, with new pilots filling in closer to the squadron’s anticipated deployment date. While not ideal, this has been the best workaround, Shoemaker said, and in the tactical air squadrons even greater manning shortages during maintenance phase can be expected in 2019.

The admiral said that wouldn’t quite cover the pilot shortfall in 2019, though, so some junior officers could expect to see their tours extended, or even do a second at-sea tour instead of coming ashore for a production billet – teaching at a flight school or fleet replacement squadron, for example.

“We’ll see potentially some changes” to junior officers’ career progression paths, he told USNI News.
“If we do have to extend and/or recycle some back to sea duty, that will be out of the norm. We’ve just got to make sure we don’t hurt ourselves – those would all be folks who would be going to production tours in their first shore rotations, so we’ve got to make sure we get that right and manage it.”

The Marine Corps is facing fewer challenges in the aftermath of the T-45 operational pause. Though former Deputy Commandant for Aviation Lt. Gen. Jon Davis had told USNI News previously that pilot production would have to be back to 100-percent by September in order to avoid personnel challenges in the service, current DCA Lt. Gen. Steven Rudder told USNI News today that “we were good in [Fiscal Year] ’17 because we had pilots that were already in the pool. So we’ll watch it going into ’18, but thus far … it looks like we’ll be able to recoup and get back on staff. So we’re actually positive about how T-45 production is going.”

Rudder added that “we had a lot of transition pilots that we were able to fill seats, so we didn’t go empty with any seats” in the fleet despite the T-45 operational pause.