40 T-45 Goshawk jets from Chief of Naval Air Training Command sit on Naval Air Station Key West’s Boca Chica Field preparing for their aircraft carrier qualifications on Dec. 6, 2016. The student aviators are flying the T-45s during Field Carrier Landing Practice before they head out to the carrier USS George Washington (CVN 73) for their first aircraft carrier landings. US Navy photo.

Navy student pilots will resume some flights in the T-45C Goshawk this week after a 12-day operational pause to determine the cause of recent oxygen-generation system failures, but they will not be allowed to land on aircraft carriers or fly higher-altitude missions until a permanent solution is found.

Commander of Naval Air Forces Vice Adm. Mike Shoemaker ordered an initial three-day operational pause on April 5 after increasing concerns that pilots in the two-seat jet trainer may be at risk of hypoxia due to problems with the On Board Oxygen Generator System (OBOGS). That pause was extended as engineers struggled to determine the cause of the OBOGS failure, which Naval Air Forces spokeswoman Cmdr. Jeannie Groeneveld told USNI News is unrelated to the OBOGS failures and other physiological episodes (PEs) experienced in the rest of the Navy’s jet fleet.

Groeneveld said that about 75 percent of the PEs that occur in the F/A-18A-D Hornets, F/A-18E-F Super Hornets and EA-18G Growlers have to do with cabin pressure problems from the Environmental Control System (ECS), and the remaining 25 percent are due to OBOGS. Two key factors with F-18 OBOGS failures have helped the Navy continue operating those aircraft, though: first, she said, the OBOGS system on the F-18s has consistently lit up an indicator light to tell pilots there is an issue before they start to feel sick, allowing the pilot to grab an “O-ring” bottle of pure oxygen to breathe from, which gives about 10 minutes to find a safe place to land. And secondly, once the pilots begin breathing from the O-ring, any symptoms of hypoxia – headache, tingly fingers, grogginess – have subsided.

With the T-45C, Groeneveld said “in every case in the T-45 we weren’t always getting an indicator light” from the OBOGS – which is not identical to the OBOGS found on the other jets. Additionally, if pilots began feeling sick and grabbed the bottled oxygen, their symptoms did not immediately subside.

Engineers have still not determined what the problem is, she said, though three T-45s involved in recent PEs are currently at Naval Air Station Patuxent River, Md., to be studied. One is having its OBOGS completely disassembled to look for clues, and the other two are undergoing a process similar to a mishap investigation.

Until the engineers discover what is wrong and learn how to fix it, T-45 instructor and student pilots will not be using OBOGS during flights. A modified mask completely detaches them from the system and allows them to get back in the air for about 75 percent of their mission set, though Groeneveld said they could not land on aircraft carriers or exceed 10,000 feet cabin pressure without OBOGS.

“This is a temporary mitigation measure to get them back to some of their flights,” she said.

On March 31, “94 flights were canceled between Naval Air Stations Kingsville, Meridian and Pensacola due to operational risk management (ORM) concerns raised by T-45C instructor pilots. Their concerns are over recent physiological episodes experienced in the cockpit that was caused by contamination of the aircraft’s Onboard Oxygen Generation System (OBOGS). Chief of Naval Air Training (CNATRA) immediately requested the engineering experts at NAVAIR conduct in-person briefs with the pilots,” according to an April 5 Navy news release. Those briefings took place on April 3 and 4 ahead of the April 5 operational pause announcement.

Shoemaker visited the three locations on April 6 to 8 to meet with instructor and student pilots, hear their concerns and share with them the Navy’s latest efforts to address the physiological episodes problem, which has been increasing across the Navy’s jet fleet since at least 2010.

“After briefings and discussions with our aircrew, their training wing leadership, the engineers, and aeromedical experts, we have identified a way forward to resume flight operations safely by limiting the maximum cabin altitude to below 10,000 feet in order be able to operate without using the OBOGS system,” Shoemaker said in a Navy statement announcing the end of the operational pause.
“We will be able to complete 75 percent of the syllabus flights with the modified masks while we continue the important engineering testing and analysis at PAX River [Naval Air Station Patuxent River, Maryland] to identify the root cause of the problem. This will remain our top safety priority until we fully understand all causal factors and have identified a solution that will further reduce the risks to our aircrew.”

Beginning this week, instructor pilots will conduct warmup flights with the new masks and operating limits, after which they will brief the remaining pilots and students in their squadrons on the changes. As instructor pilots complete their warmups, warmups and training flights for student pilots will begin.

“We have energized the force, are working with outside agencies, and established an Integrated Project Team (IPT) at NAVAIR, along with an aeromedical crisis action team of flight surgeons, physiologists and toxicologists. All teams are immersed in this effort and working with the same sense of urgency to solve our physiological episodes across the fleet,” Shoemaker said in the April 15 statement. 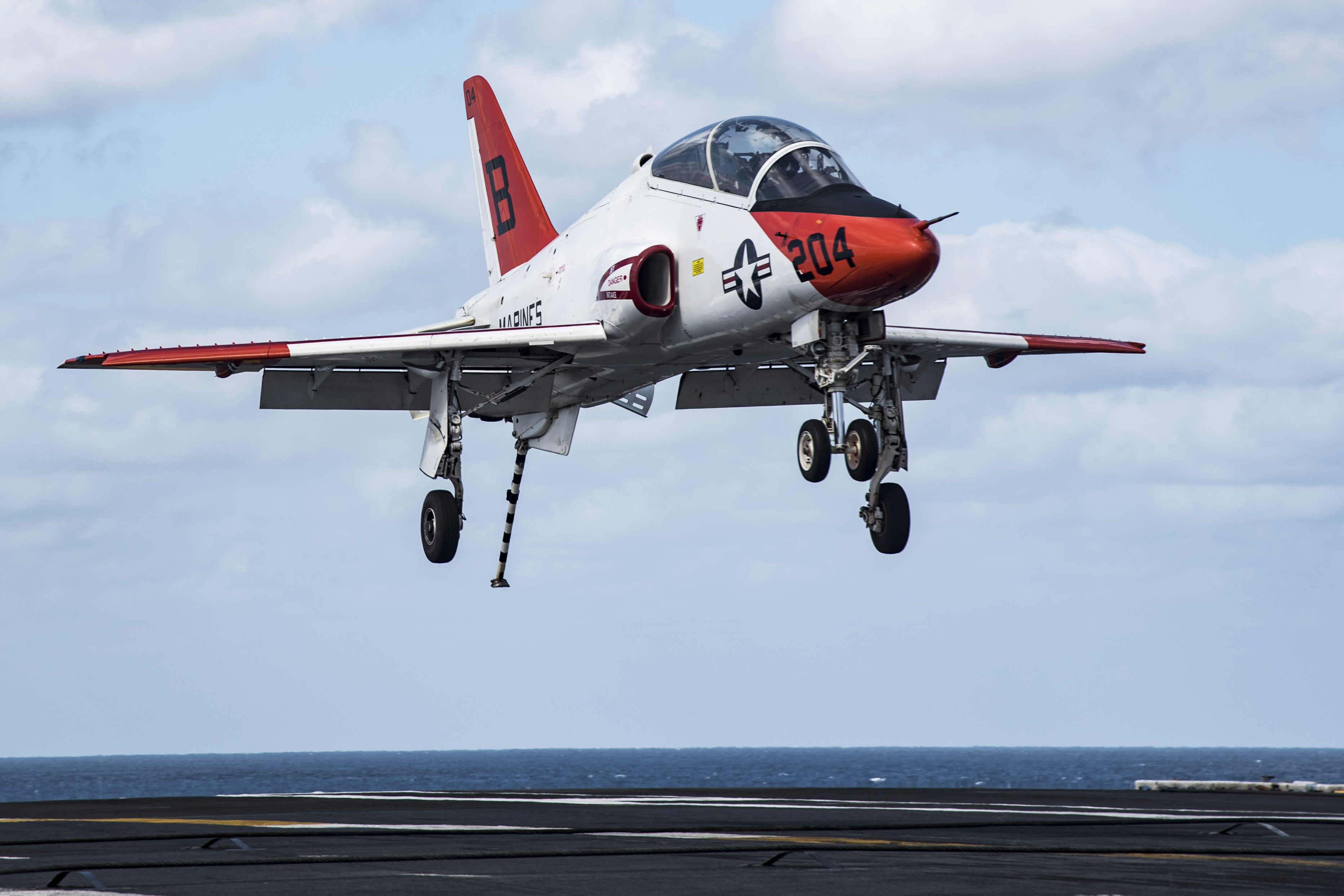 The Navy created a Physiological Episode Team (PET) in 2010 to look into what was then a rising trend in the F/A-18A-D Hornets and the F/A-18E-F Super Hornets, which has since spread to the EA-18G Growler and T-45C Goshawk fleets as well. During these PEs, pilots either receive insufficient oxygen or contaminated oxygen – leading to hypoxia – or experience a drop in cabin pressure, leading to decompression sickness.

“Physiological Episodes (PEs) occur when aircrew experience a decrement in performance, related to disturbances in tissue oxygenation, depressurization or other factors present in the flight environment,” according to recent Navy testimony to the House Armed Services tactical air and land forces subcommittee.
“PEs are categorized into two general groups, those related to Onboard Oxygen Generation Systems (OBOGS) or pilot breathing gas, and those caused by problems in the Environmental Control Systems (ECS), i.e. – unscheduled pressure changes in the flight station. These phenomena jeopardize safe flight.”

Shoemaker and others in the service have called finding a solution to the rising PE numbers a top priority for years and promised a “unconstrained resources” approach – offering whatever money or people were needed to find a solution. But the Navy’s testimony and other recent comments note the complexity in finding a root cause and a solution.

“The NAVAIR PET is currently addressing hypoxia and decompression events as the two most likely causes of recent physiological episodes in aviators. As symptoms related to depressurization, tissue hypoxia and contaminant intoxication overlap, discerning a root cause is a complex process. Episodes of decompression sickness typically accompany a noticeable loss of cabin pressure by the aircrew, while the cause of hypoxic related events may not readily apparent during flight. Reconstruction of the flight event is difficult with potential causal factors not always readily apparent during post-flight debrief and examination.”

Despite increased data collection since 2010, the Navy still doesn’t know what is causing these physiological events – but they are occurring at a growing rate.

“The process for investigating a physiological episode begins with the submission of data describing the event. Engineers from the ECS FST and the Aircrew Oxygen Systems In-Service Support Center work with the squadron maintenance department to identify which components of the aircraft should be removed and submitted for engineering investigation. The squadron flight surgeon also submits data on the medical condition of the pilot and in-flight symptoms that were experienced,” according to the Navy’s recent testimony.
“After completion of the component investigations, the incident is examined holistically by members of the engineering teams and Aeromedical specialists to identify the most likely cause of the incident. Of 382 cases adjudicated by the PET so far, 130 have involved some form of contamination, 114 involved an ECS component failure, 91 involved human factors, 50 involved an OBOGS component failure, 13 involved a breathing gas delivery component failure, and 76 were inconclusive or involved another aircraft system failure. Of note, some of the events resulted in assignment to more than one category.”

The new modified mask and modified operational envelop for the T-45C pilots are the latest in a string of ideas to mitigate the risk to pilots, short of an actual solution.

“Though the number of components and configurations of the aircraft make finding ‘smoking guns’ difficult, Naval Aviation has continued to implement multiple lines of effort across over the past couple years to mitigate the risks,” according to the April 8 news release.
“Naval Aviation requires pilots train in the simulator using a Reduced Oxygen Breathing Device to improve aircrew recognition of physiological symptoms related to hypoxia. The improved On Board Oxygen Generating System (OBOGS) [sieve, or filter] material has been installed in all T-45, and new oxygen monitors are being fielded as part of an operational test in Pensacola. Sorbent tubes, devices that detect contaminants in breathing gas air, are also are being provided to pilots and, as soon as our inventory supports, will be required on every flight to help ensure we capture any PE event that might yield clues to the contamination agent.”

The new sieve material will be installed on all OBOGS systems in all jets by the end of the calendar year, with the T-45 fleet already having completed the installation of the new material.

The Navy has also increased the intervals of inspections to improve the rate of detecting component failures before they lead to health hazards for pilots, and it has bought cockpit pressurization warning systems to field in the planes.

“Our aviators must be able to operate with confidence in our platforms and in their ability to safely execute their mission. To help ensure we eliminate this risk, collection and reporting of event data and your continued leadership is critical,” Shoemaker said in the Navy statement. 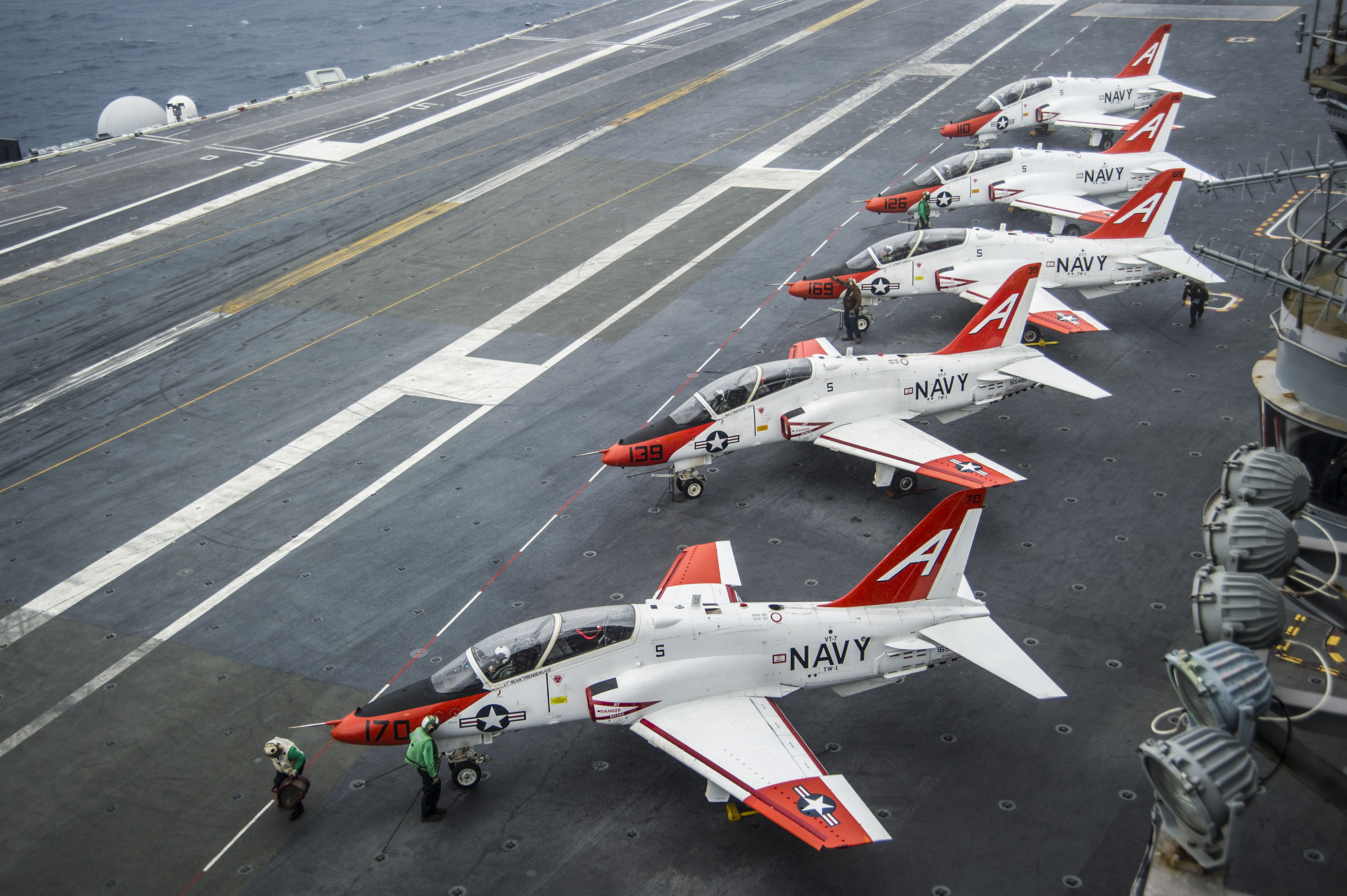 Shoemaker himself has issued three memos on PEs during his time as Air Boss – one in October 2015, one in May 2016 and one in January 2017. In the most recent memo, he said of future mitigation efforts, “until we fully understand contamination, our goal (partnering with ONR and academia) is the development of a small, lightweight physiological monitor that will detect degraded performance and provide immediate warning to the aircrew, but we are still a few years from that solution.”

“We are working diligently to determine all the root causes of PEs and find solutions, and we will continue to aggressively prioritize resources and engineering efforts. Alert aircrew remains our best line of defense against PEs. Your awareness and immediate actions at the first signs of something ‘not quite right’ are critical, leading to safe aircraft recoveries and the identification of key causal factors. Please continue your focused simulator training, review of PE immediate action items at every brief, and maintenance efforts to identify ECS and OBOGS systems that are not performing to standard,” he continued in the memo.
“You have my word that we will continue to focus all of our [Naval Aviation Enterprise] efforts on this problem, and until we have completely eliminated the PE risks across the force, this will remain our #1 safety priority.”