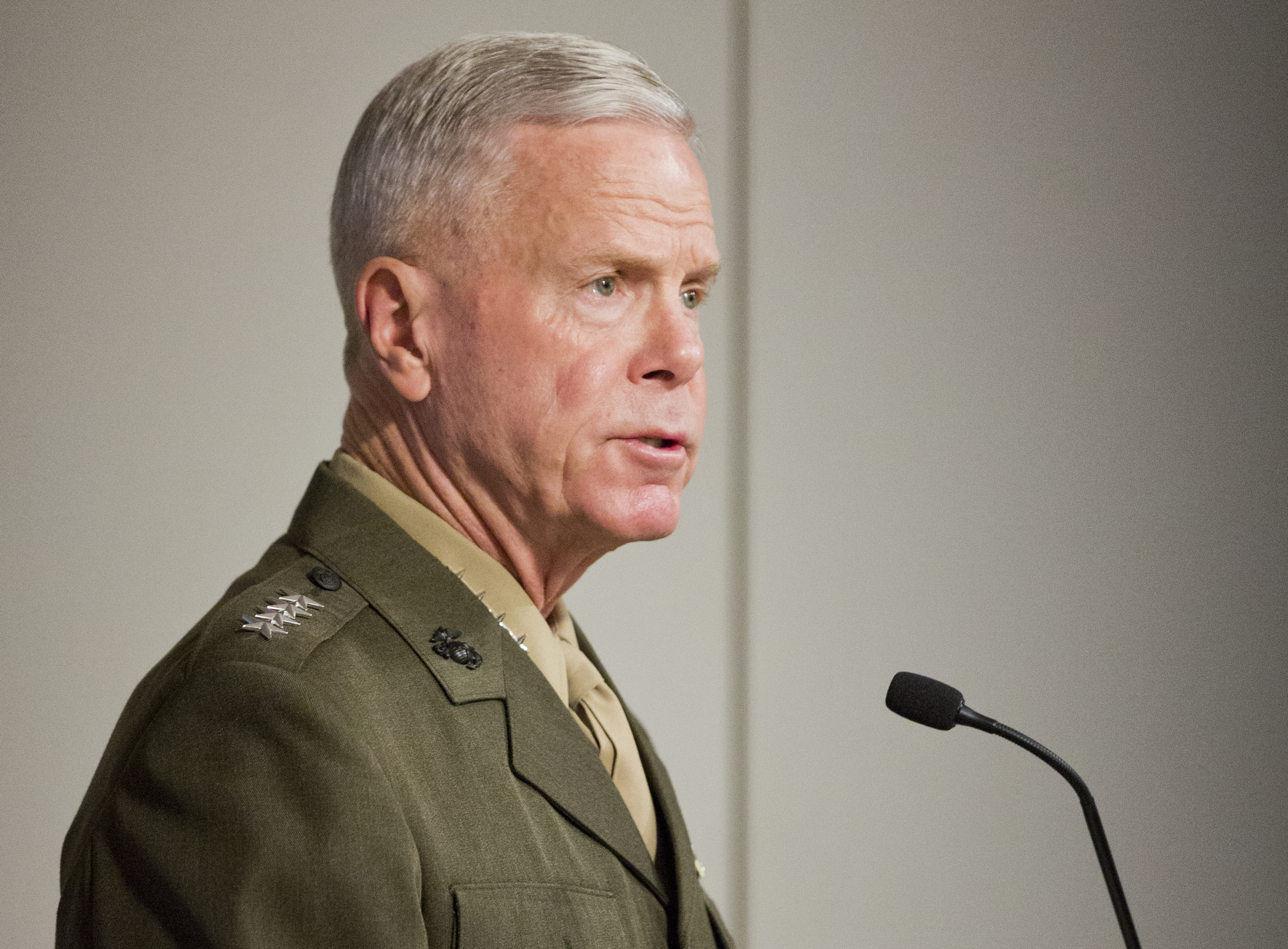 A military court has overturned conviction of a Marine who pleaded guilty to charges related to urinating on dead Taliban members because the court said former Commandant of the Marine Corps Gen. James Amos exerted “unlawful command influence” (UCI) over the investigation, according to a decision issued on Wednesday.

A three-judge panel on the U.S. Navy-Marine Corps Court of Criminal Appeals overturned the conviction of Staff Sgt. Joseph Chamblin, who pleaded guilty to violations of military law related to videos and pictures taken of Marine snipers with 3rd Battalion, 2nd Marines urinating on dead Taliban in 2011. The pictures and video circulated widely on YouTube and other social media platforms, resulting in a public outcry over the actions of the Marines, and enraged service leadership.

As part of a pre-trial agreement for his guilty plea, Chamblin was sentenced to 30 days of confinement, a loss in rank and docked pay. He eventually left the service.

In several instances, the panel found the actions of then-commandant Amos had imposed an unlawful level of command influence on the investigation into the circumstances behind the videos.

The incident drew massive scrutiny from the Obama White House and the State Department. Amos, in turn, placed pressure on the investigation to punish the Marines in the video.

“That’s when things go off the rails. That’s when people start to make decisions [based on public perception],” military lawyer Phil Cave told USNI News on Thursday.
“All the things they shouldn’t be thinking about when they’re making decisions in these cases that are being made.” 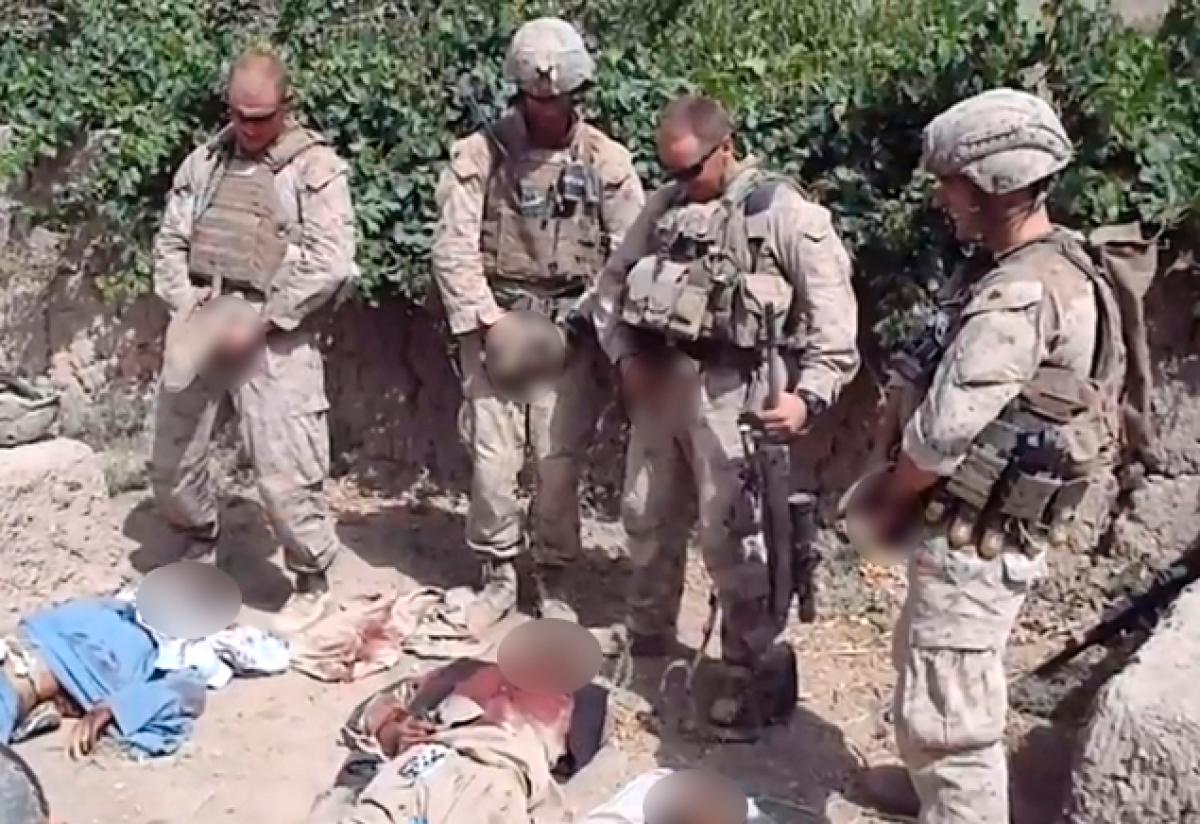 A screen grab from the video which Marines urinate on dead Taliban combatants.

The UCI began shortly after a Marine general was assigned to oversee the case, according to the decision.

In early 2012 Amos told then-Lt. Gen. Thomas Waldhauser, who was acting as the consolidated decision authority for the case, that he wanted the Marines accused “crushed” and encouraged Waldhauser to try the Marines by general courts-martial rather than through less severe non-judicial punishment or special courts-martial.

“[Amos] asked me specifically something to the effect of why not or will you give all of them General Court-Martials? I responded, ‘No, I’m not going to do that,’ . . . stating that I did not believe any of the cases warranted General Court-Martial. [Amos] told me he could change the Convening Authority . . . and I responded that would be his prerogative,” Waldhauser said in a 2012 affidavit that was quoted in the ruling.

Waldhauser, who now oversees U.S. Africa Command, was then replaced by the head of Marine Corps Combat Development Command, Lt. Gen. Richard Mills, to act as the CDA over the punishment of the Marines. In a letter informing Waldhauser, Amos said he was making the shift because he knew he went too far in his conversation about how he wanted the case handled.

“[Amos] contacted Lt. Gen. Waldhauser again and ‘admitted that he had crossed the line and that replacing [him] as CDA was how he was going to fix that’,” read the ruling.

However, following the appointment of Mills, the panel found that Marine leadership made attempts to exert influence on the case, according to Mills’ staff lawyer Col. Jesse Gruter and his deputy Maj. James Weirick in affidavits presented to the panel.

While Waldhauser was replaced, a civilian attorney in the Navy Office of the General Counsel with ties to Amos, Robert Hogue, was still attached to the case.

Hogue called for classifying photos and video involved in the case as secret. Marine leadership approved the classification, and Gruter complained.

“Shortly after making our concerns regarding the classification issue known to both Judge Advocate Division and the Office of General Counsel, Maj. Gen. Vaughn Ary, the Staff Judge Advocate of the Marine Corps, attempted to replace me as [Mills’ lawyers],” Gruter said in a 2012 affidavit cited in the decision.
“Ary called and informed me that he wanted to replace me because he needed somebody more senior who could talk ‘inside the Beltway’.”

The Marine Corps did not object to the facts in Gruter’s affidavit, according to the ruling.

While the case was ongoing, Amos and then-Sgt. Maj. of the Marine Corps Micheal P. Barrett held dual “Heritage Briefs” in a mandatory all-officers call at Marine Corps Base Quantico, Va.

“The brief was entitled, What Does America Think of Her Marines Today? On the first and sixth slides of the Sergeant Major’s brief was a still photo of the implicated Marines urinating on the deceased insurgents,” read the decision.
“In his affidavit, Col. Gruter states that the brief caused him concern because ‘the brief given by the Commandant, regardless of whatever comments followed, displayed what can fairly be categorized as evidence (the still photo of the Marines urinating on the deceased) that would be used in any court- martial’.”

Meanwhile, as the Marine Corps was cycling out of combat assignments in Afghanistan, Amos became taken with “reawakening” the Marine Corps into a better-disciplined force in garrison, according to several sources who spoke USNI News at the time.

“We will stop accepting bad behavior or substandard performance as a natural consequence of being a ‘combat hardened’ Marine Corps,” Amos said in late 2013 at a General Officer Symposium briefing on the direction of the service after the withdrawal of forces from Afghanistan.

In the same period, Amos had come under fire for potentially applying unlawful command influence on sexual assault cases in the Marine Corps.

“My lawyers don’t want me to talk about this, but I’m going to anyway,” Amos said May 23, 2012, at Camp Pendleton, Calif., according to a 2012 report from the McClatchy news service.
“The defense lawyers love when I talk about this, because then they can throw me under the bus later on and complain about unlawful command influence.”

Eventually, the eight Marines identified in the urination videos were disciplined.

“Staff Sgt. Edward Deptola and Sgt. Rob Richards, like Chamblin, pleaded guilty and received demotions at special court-martial proceedings,” reported Military.com.
“Richards, who was severely wounded in 2010 and had been nominated for a Bronze Star for valor … died in 2014 at the age of 28. He was buried in Arlington National Cemetery with full military honors.”

In a statement, Weirick told USNI News that the ruling affirmed what he has said related to the case.

“The court exposed the illegal and unethical conduct of Jim Amos, Vaughn Ary, and Bobby Hogue, but their reprehensible conduct also deprived the other Marine snipers of a fair hearing,” Weirick, Mills former attorney, told USNI News.
“Those cases must also be vacated to ensure justice and help restore public confidence in the military-justice system.”

It’s unclear if any of the other cases will appeal conviction deals based on the appellate court ruling.

A message left with Amos by USNI News on Thursday was not immediately returned.