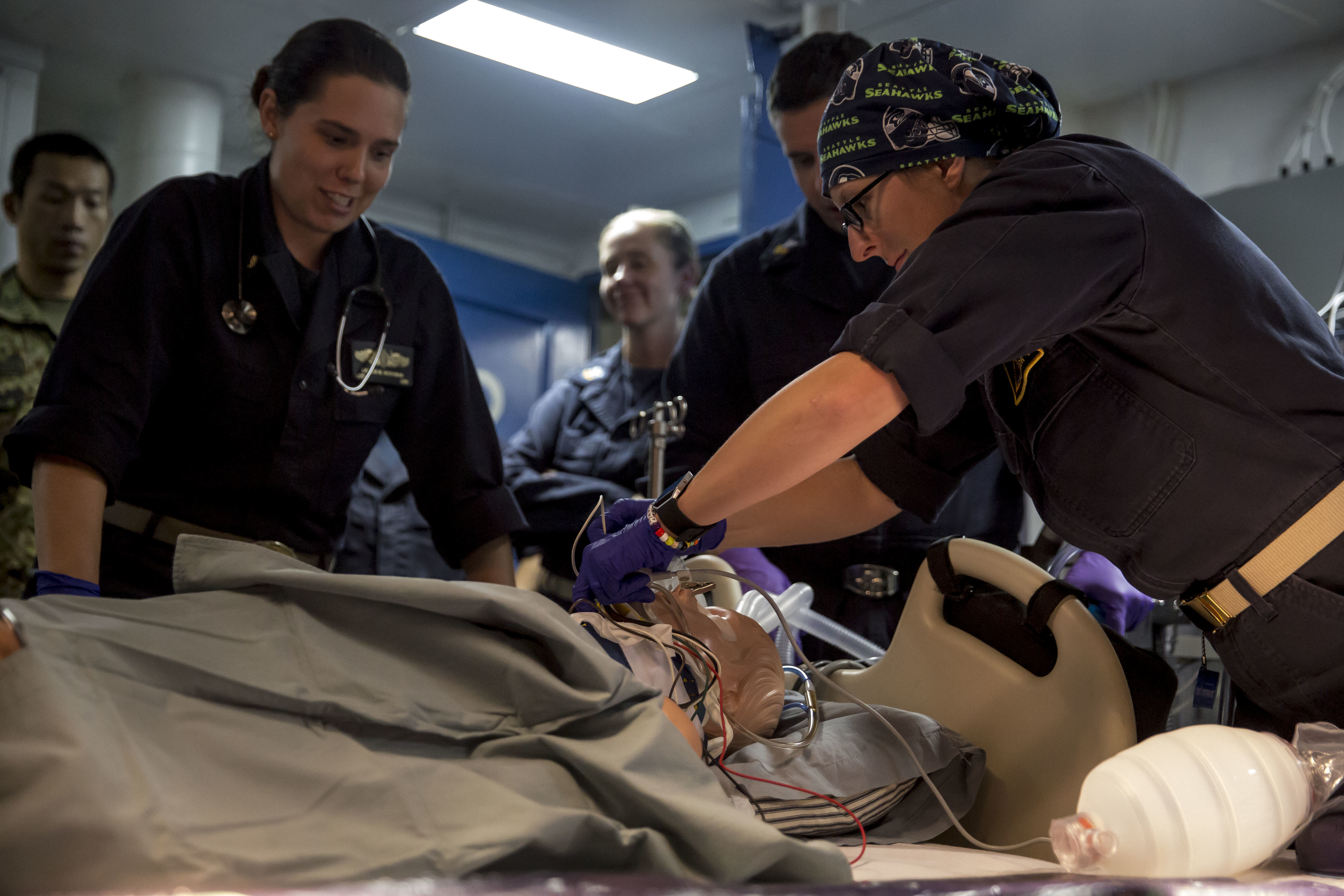 The Navy is experimenting with operating a specialized medical team on a smaller amphibious ship to provide more front-line trauma care at sea, filling a capability gap that arises when deployed ships are operating apart from their larger strike groups.

“Smaller amphibs such as an LPD and LSD have their organic medical staff headed by a general medical officer, with no capability to do surgery or major resuscitation,” Cmdr. Robert Staten, Expeditionary Strike Group-3 command surgeon and officer in charge of Fleet Surgical Team 9, told USNI News via email from amphibious assault ship USS Essex (LHD-2). Rushmore and other LSDs “are not equipped with [operating rooms] or associated gear and instruments, so the addition of the NATT provided a significant plus-up in capability.”

The new trauma team provides what is called “Role 2” care. In the four echelons of care, it’s the first denoting surgical capability by a surgeon on a patient.

NATT-1 is considered “role 2 light maneuver,” or R2LM, denoting its light footprint and mobility in providing that level of surgical care. The team has been training in recent months, including a three-week-long pilot course at Surface Warfare Medical Institute East in Norfolk, Va., according to a July 28 Navy Medicine Operational Training Center news release.

“With our basic set, we can perform four surgeries and resuscitate up to six non-surgical patients and hold them for at least four further hours while awaiting” medical evacuation, Cmdr. Michael Johnston, NATT-1’s officer-in-charge, said via email from Rushmore.

“Placing the NATT on an LSD for Dawn Blitz represents a proof of concept,” Johnston said.
“The LSD can indeed disaggregate and sail away on its own to deliver Marines and special (operations) forces to the beachhead and then standby to receive casualties for whom it can now provide role 2 care.”

When San Antonio-class amphibious transport docks (LPD-17) disaggregate from the amphibious ready group (ARG), they take with them a medical space with two operating rooms, two dozen hospital beds and room for a hundred more if overflow space were used in an emergency. If an LSD disaggregates from the ARG, though, it takes no operating rooms and only a handful of hospital beds for patient isolation.

Along with the new team on Rushmore, the addition of the fleet surgical team on Anchorage enables its medical department to provide greater surgical and resuscitative care.

Adding extra surgical capability isn’t a new idea, and this latest experiment renews a recent effort that fell flat despite broad support within the Navy and the Marine Corps.

The concept for this iteration of the Fleet Surgical Team “is built on the previous Expeditionary Resuscitative Surgical System (ERSS) and Damage Control Surgery (DCS) teams that the Navy has used for the past decade or so to provide damage control surgery capabilities on ships (in the case of ERSS) and on shore (in the case of DCS),” Johnston said.
“Unfortunately, neither ERSS or DCS were official programs of record and both went through primarily Army training, which is no longer available due to constraints on the Army side.”

So the Navy is breathing new life into the idea “to build a pure-Navy program of record to provide an R2LM capability to the battle-space,” he said. “This is extremely important, as the demand signal for mobile role 2 care has only risen over the past decade, both from our friends on the special operations side and from our amphibious ready groups that more and more operate in a disaggregated state.”

During disaggregated operations, the smaller ships are hundreds of miles away from the big-deck ship “and therefore can’t rely on the LHD for surgical support,” Staten said. Having surgical capability on each ship will ensure more timely care to treat injured and ill patients, and it “extends the battle-space by broadening ‘golden hour’ coverage, particularly when the LSD sails alone in a disaggregated state.”

The experiment also is testing the use of a secure, 4G LTE network to support medical consults and telemedicine, Staten said. At one point, “this technology allowed a surgeon from an ashore facility to visualize and remotely ‘coach’ a shipboard physician through a simulated surgical procedure (cricothyroidotomy) in real time using the high-quality video link.” The procedure, involving an incision to clear an airway, is “believed to be first procedure performed of this type,” he said.