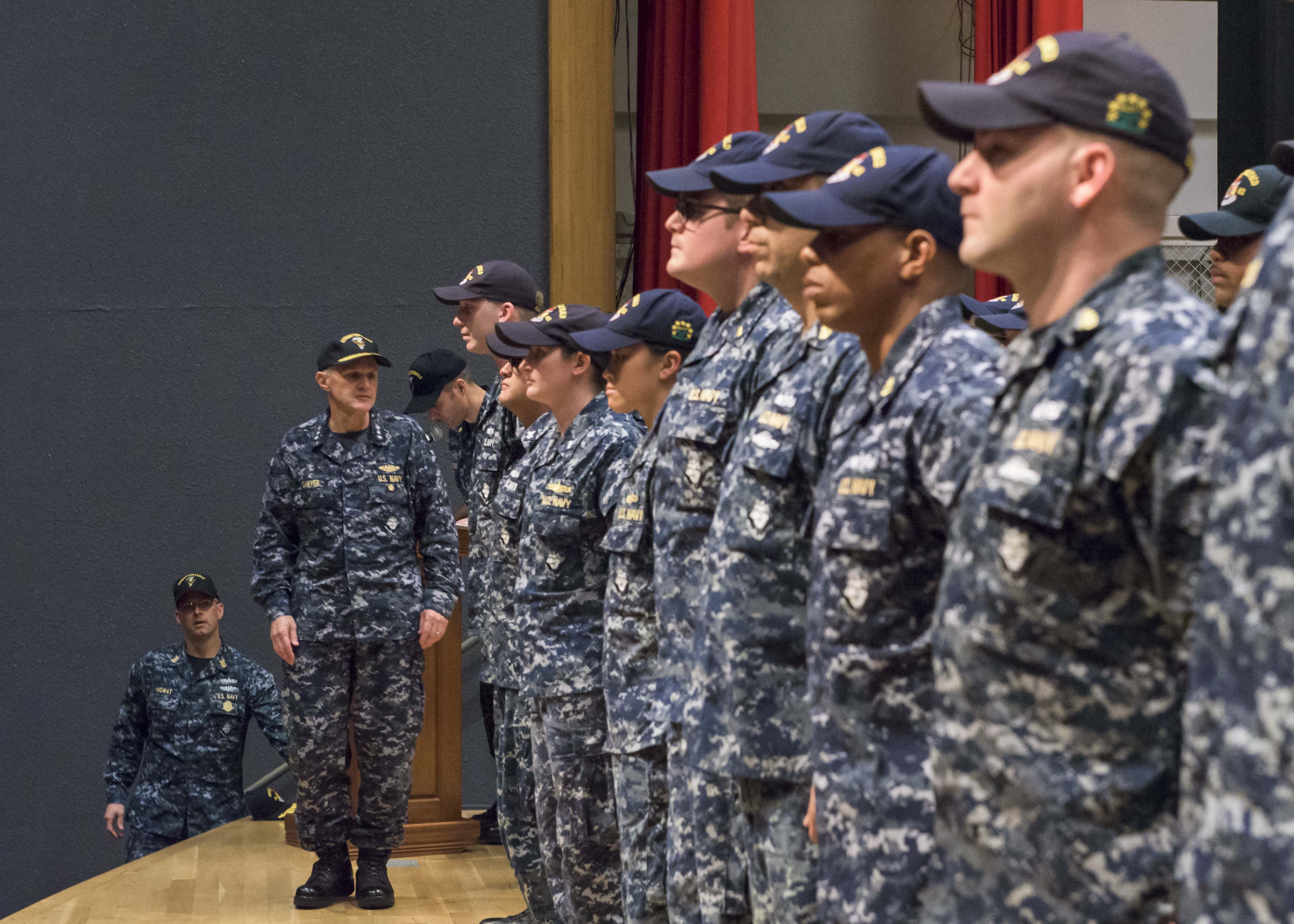 Vice Adm. Phil Sawyer, commander of U.S. 7th Fleet, awards the Navy and Marine Corps Commendation Medal to 36 crew members of the Arleigh Burke-class guided-missile destroyer USS Fitzgerald (DDG 62) who distinguished themselves for their bravery and contributions to damage control efforts after a collision with a merchant vessel on June 17, 2017. US Navy photo.

The Navy awarded 36 USS Fitzgerald (DDG-62) sailors for their bravery and successful damage-control efforts following a June 17 collision that killed seven of their shipmates.

In a ceremony today, Vice Adm. Phil Sawyer, commander of U.S. 7th Fleet, awarded the Navy and Marine Corps Commendation Medal to 36 Fitzgerald sailors and a Flag Letter of Commendation to the ship’s two ombudsmen for their support to families.

“Following the collision, which claimed the lives of seven Fitzgerald Sailors, the crew fought back against progressive flooding across 19 spaces for more than 16 consecutive hours,” according to a Navy news release.
“Facing constant peril from flooding, electrocution, structural damage and noxious fumes, these Sailors prevented further loss of life and ultimately saved the ship.”

The Navy and Marine Corps Commendation Medal is awarded to those who “distinguish themselves by heroism, outstanding achievement or meritorious service,” according to the release.

The citations that accompany each Navy and Marine Corps Commendation Medal outline the heroic actions taken after the collision that saved lives and kept the ship afloat. In one example provided to USNI News by U.S. 7th Fleet, Fire Controlman Second Class Joshua Tapia was awarded for his “heroic achievement while serving as a fire controlman aboard USS Fitzgerald (DDG 62) on 17 June 2017. Petty Officer Tapia displayed extreme calm and poise as he assisted with the egress of personnel from Berthing Two following a collision at sea. With no regard to his own safety, he provided aid to his shipmates as they exited a scuttle to escape the in-rush of sea water into the berthing compartment. His brave actions saved the lives of at least two sailors. By his unswerving determination, profound bravery, and complete dedication to duty, Petty Officer Tapia reflected credit upon himself and upheld the highest traditions of the United States Naval Service.”

The citations for the two Flag Letters of Commendation outline actions taken in the chaotic aftermath of the collision.

In the letter to Kumi Bergstraser, Sawyer credits her “for outstanding performance as USS Fitzgerald (DDG 62) Ombudsman, from January 2017 to October 2017. Kumi performed her demanding duties in an exemplary and highly professional manner. Demonstrating exceptional dedication, loyalty, and teamwork, she maintained the highest standards of professionalism and created a healthy sense of community by being a positive role model for the Fitzgerald crew and their families. During the night of 17 June 2017, she provided critical support and information to over 200 families, ensuring they were informed on the status of the ship and assisted in coordinating access to mental health services. She answered over 500 calls from family members, directing them to the support and assistance they needed. She worked tirelessly to ensure nearly 100 Sailors who had lost personal effects were able to reach their families, were supplied with provisions, and had a place to stay. Her unsurpassed professionalism, dedication, and initiative reflected credit upon her and are in keeping with the highest traditions of the United States Naval Service. It is with great pleasure that I commend Kumi for an outstanding job and extend to her the traditional Navy “Well Done.”” 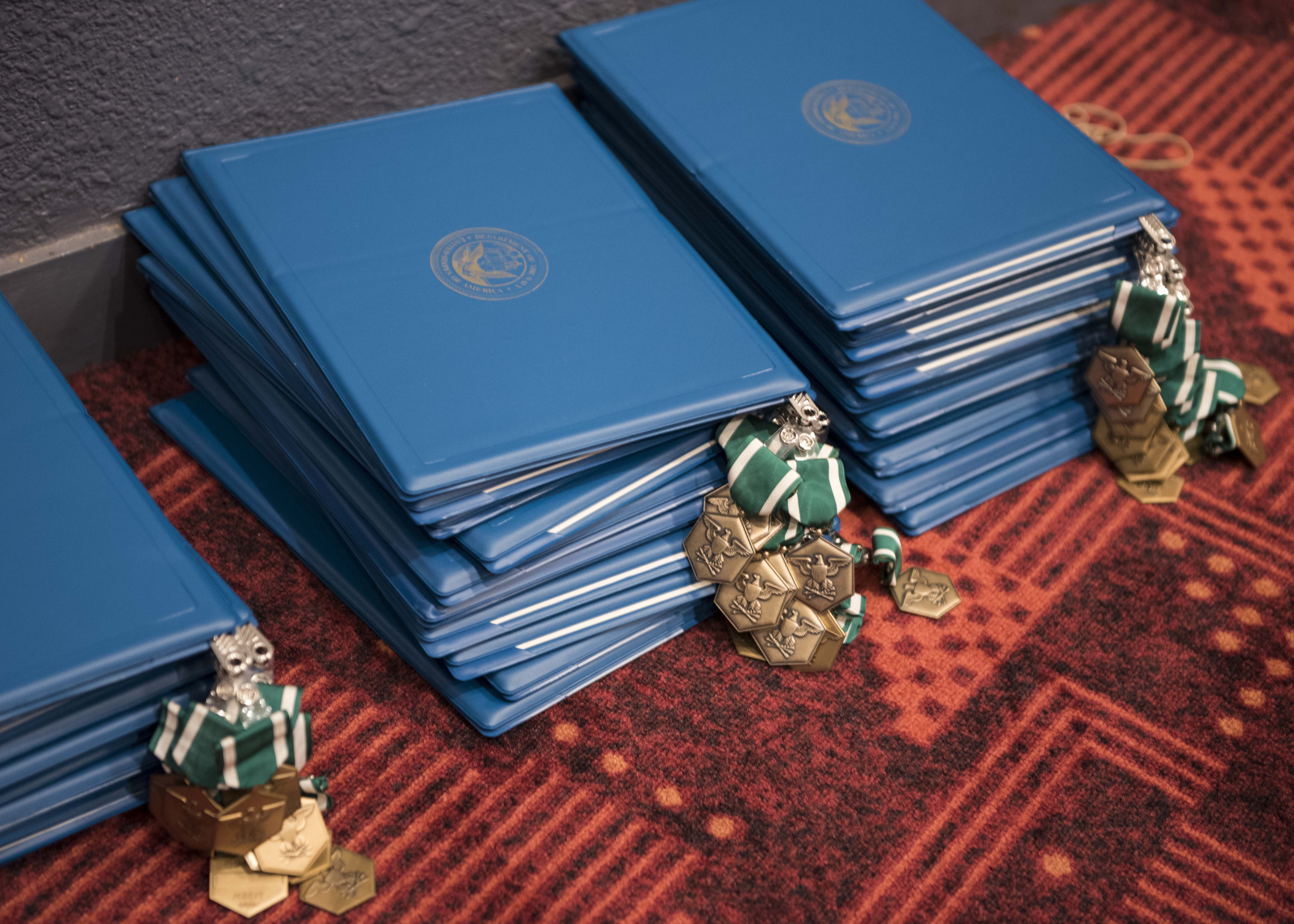 Navy and Marine Corps Commendation Medals and citations are staged for presentation to 36 Sailors assigned to the guided-missile destroyer USS Fitzgerald (DDG 62) during an awards ceremony in Yokosuka, Japan. US Navy photo.

The Navy and Marine Corps Commendation Medal was awarded to:

The Flag Letter of Commendation was awarded to: