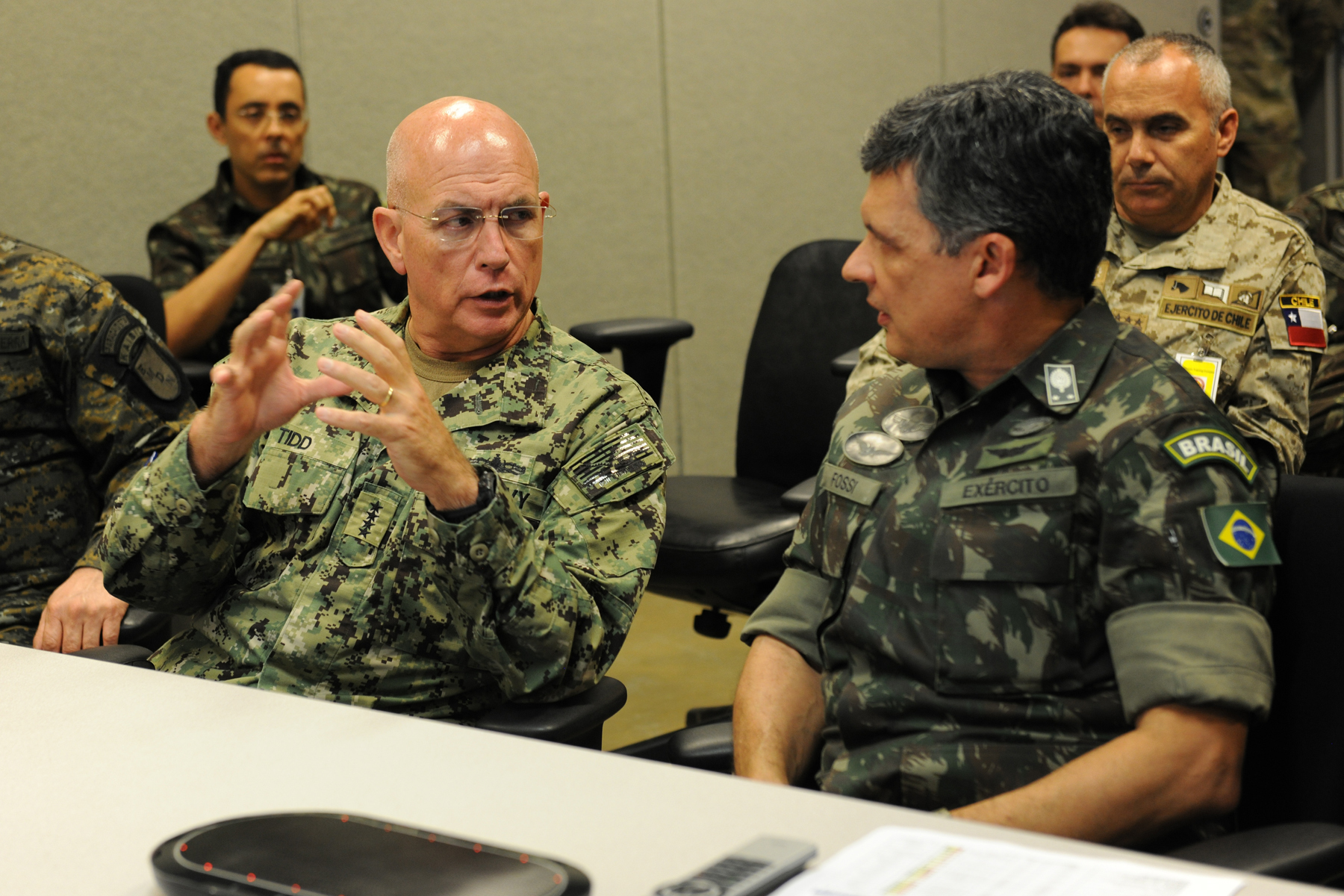 The United States needs to continually engage in building stronger ties with the nations of Central and South America because “no other region has more impact on our daily lives,” Adm. Kurt Tidd told a gathering of Olmsted Foundation scholars Wednesday in Washington.

If Washington backs away, he warned, others like Moscow and Beijing will fill the void.

Following the presentation, the top officer of U.S. Southern Command told USNI News that the idea behind the building stronger “connective tissue” between SOUTHCOM, U.S. Northern Command and countries in both regions “is to secure the Southern approaches” to the United States.

Criminal and political extremist networks operating in the region “have the potential to directly threaten our homeland.” Those activities threats include drug smuggling, human trafficking and acts of terrorism.

Tidd said this level of engagement means not only working with the region’s armed forces, but also law enforcement, judicial systems and diplomats to achieve “a unity of effect” in disrupting these networks “that are transnational and global.”

“Colombia and Mexico are working together” to break up the flow of narcotics moving northward, he said. “That’s the kind of connective tissue we’ve got to think about.”

SOUTHCOM and NORTHCOM are “synchronized” in their approach to keeping the homeland safe, Tidd said, noting he regularly coordinates with NORTHCOM commander Air Force Gen. Lori Robinson to keep abreast of developments there, from activities of violent criminal and terrorist networks to recovery from natural disasters.

Though criminal and political extremist groups have proven they can easily “be destructive and destabilizing” and create a “chaos of crisis” in civil society, Tidd said “none of the challenges are insurmountable” and they can be met with “a modest investment.” Several times in his address he emphasized continued engagement and adopting preventative measures “to demonstrate we’re in it for the long-haul.”

Later, in response to an audience question about Moscow and Beijing filling a void if Washington pulls back, Tidd said, “they are countries that see opportunities. It is ours to lose the neighborhood. …There is competition.”

Tidd said, as a result, engagement in the area cannot just focus on “ungoverned spaces” – usually rural and hard-to-reach regions where central government authority and services are negligible or non-existent – but instead, “now we are talking about alternatively governed areas,” such as city neighborhoods and prisons. The networks “are adaptive and dynamic” and learn from military and law enforcement’s attempts to disrupt and destroy them.

He repeatedly noted the progress Colombia has made in addressing narcotics trafficking and ending a civil war that lasted 50 years, but he agreed with a questioner that Colombia is a complex society with remaining differences that will not be quickly resolved. For perspective, he reminded the audience the United States is still dealing with issues that arose in a civil war that lasted only four years and ended 150 years ago.

Tidd said the United States has “stressed the role of human rights” as essential to having the Colombian public accepting the government and armed forces as having legitimate authority. “They have to view you as a protector not an oppressor.”

Another effort has focused on increasing women’s roles in all of the security forces. “We’ve still got a long road to go” in understanding and employing “all the talent of your population” in the police and military forces, Tidd said, adding that some Latin American security forces, particularly those that have engaged in peacekeeping operations like Colombia and Brazil, understand the need for gender integration.

When asked about Venezuela, under President Nicola Madura’s government and on the brink of economic and political collapse, Tidd acknowledged that shortages of food, medical supplies and health care are having a devastating effect on its citizens.

Because Caracas pays close attention to what he says, especially following President Donald Trump’s tweet on political oppression there, Tidd made clear, “I am not planning an invasion.” He said the neighboring countries are watching developments in Venezuela very closely. In the end, they “will have to come together to help” it recover.