The deputy head of Naval Personnel has been quietly tapped to lead an investigation into the collision between guided-missile destroyer USS John S. McCain (DDG-56) and a chemical tanker near Singapore, Navy officials told USNI News on Thursday. 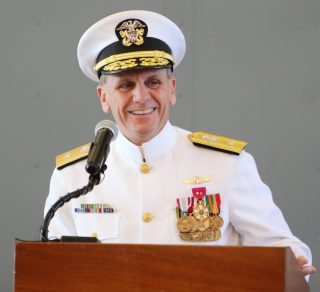 The investigation is one of several examinations into the collision that resulted in the death of 10 sailors in the early morning as the destroyer navigated a crowded shipping lane in the Strait of Malacca.

However, like the dual-purpose investigation into the June 17 collision of USS Fitzgerald (DDG-62) led by Rear Adm. Brian Fort, liability concerns for the U.S. will prevent public release of the results until the potential claims against the U.S. are settled, several officials confirmed to USNI News.

Brown is an experienced surface warfare officer with previous command of a destroyer and a cruiser.

“A Dual-Purpose investigation may be used to protect privileged information while allowing the investigation to be used for other official purposes (e.g., disciplinary action, safety),” according to the Navy’s JAG manual.

The early results of the dual-purpose investigation into the Fitzgerald collision resulted in the removal of the leadership triad of the destroyer and contributed to the removal of U.S. 7th Fleet commander, Vice Adm. Joseph Aucoin. Both ships were part of 7th Fleet’s forward deployed naval forces (FDNF) based in Japan.

Last month, Vice Chief of Naval Operations Adm. Bill Moran told reporters the service would attempt to inform the families of Fitzgerald, the public and Congress as much as they could inside the bounds of the investigation.

In addition to the individual investigations into the collisions of Fitzgerald and McCain, Chief of Naval Operations Adm. John Richardson has ordered a wider probe into Navy surface force operations in the Western Pacific to be led by U.S. Fleet Forces Commander Adm. Phil Davidson.

The Navy has identified four incidents this year – three collisions and one grounding – as the basis for the examination into Western Pacific operations.

Next week Moran will testify at a joint hearing by the House Armed Services readiness and seapower and projections forces subcommittees on the collisions, along with the author of a Government Accountability Office report on readiness and training shortfalls in the Navy’s FDNF ships. The following week, CNO Richardson and Secretary of the Navy Richard V. Spencer will appear before the Senate Armed Services Committee on the subject of the collisions. 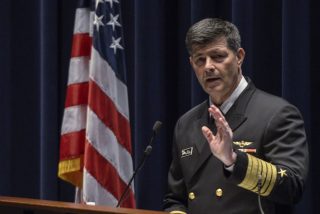 The Thursday House hearing was originally set to feature Commander of Naval Surface Forces Vice Adm. Tom Rowden, but the Navy elected to send Moran to the Hill instead, according to a Navy statement provided to USNI News.