SAN DIEGO, Calif. – The Navy could reach a 355-ship fleet by 2030 if it both extended the service life of most of its current ships and built more than two dozen new ships beyond current shipbuilding plans, two admirals said this week.

Neither approach is sufficient on its own – service life extension programs (SLEPs) help get the Navy there faster, and accelerating shipbuilding is needed to then keep the fleet at that larger size. But, speaking at the American Society of Naval Engineers’ annual Fleet Maintenance and Modernization Symposium, Naval Sea Systems Command (NAVSEA) commander Vice Adm. Tom Moore and NAVSEA Deputy Commander for Surface Warfare (SEA 21)/Commander of Navy Regional Maintenance Centers Rear Adm. Jim Downey said the Navy is embracing a hybrid approach that would get the service to a 355-ship fleet in 10 to 15 years, compared to a 30-year timeline with new construction alone.

Moore said Tuesday at the conference that the Navy was asking for funding to build nine ships in Fiscal Year 2018 and would ask for even more in 2019. Though the Navy’s plans for future shipbuilding are likely to change with the release of Defense Secretary James Mattis’ National Defense Strategy later this year, Moore said that “we’ve done some detailed studies with industry, we think we can actually build an additional 27 ships on top of [current shipbuilding plans] in the next decade through the use of things like economic order quantities, bulk buys. And I would tell you that industry is ready to go if we can provide them a stable, predictable plan going forward to build more ships.” 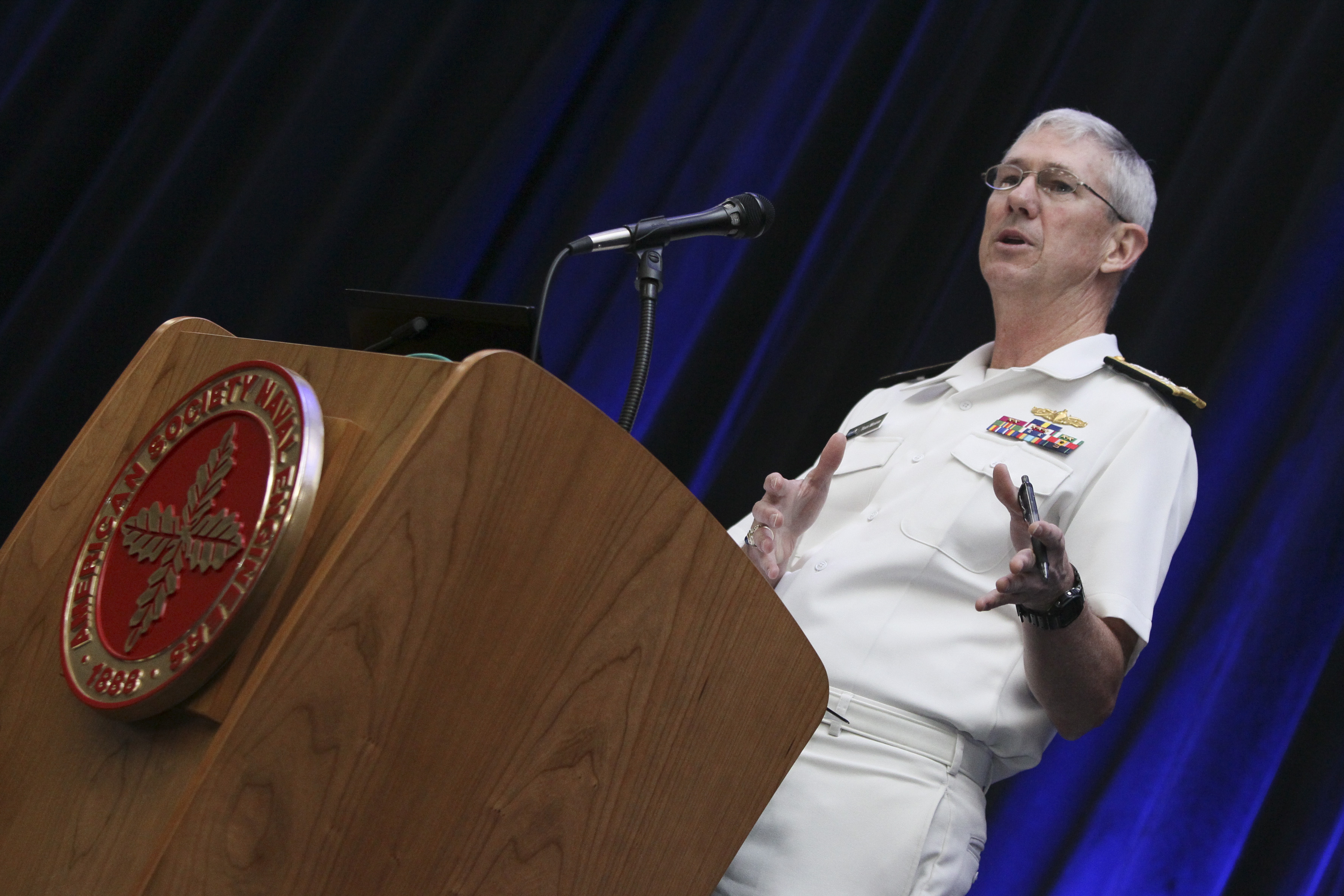 On extending the life of existing surface ships, Moore said “it’s not a lot of extra money” in the big picture to keep each ship around for another five to 10 years, and from a technical standpoint it can “absolutely” be done.

“You can get up to a number pretty close to 355 by about 2030, compared to 2047,” through the SLEP effort, he said.
“We’re off looking at that, obviously we’ve got to go look from a budget standpoint at what that means to us. But if you’re talking just a pure technical case, absolutely from a technical standpoint you can keep the ships longer.” 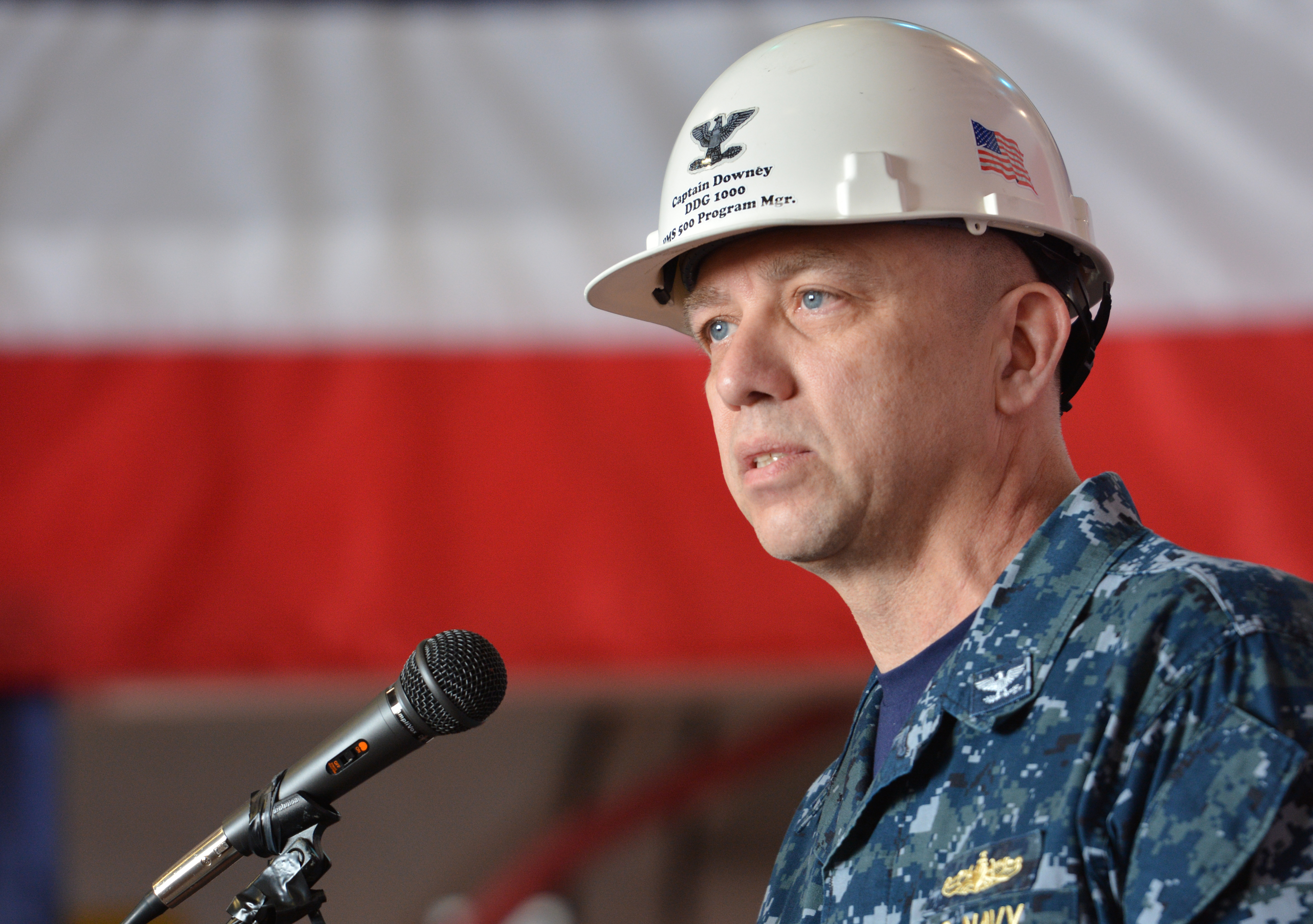 Capt. James Downey, then-DDG 1000 program manager, speaks to assembled crew and guests in the hangar bay aboard the future guided-missile destroyer USS Zumwalt (DDG 1000) following a transfer of ownership ceremony on May 20, 2016. US Navy photo.

Downey elaborated on the topic during two panel discussions at the conference. He explained that the Navy is looking at conducting one additional docked maintenance availability for the ships, which could buy the Navy something in the range of five to 10 more years of life from each ship.

“How do you get to the 355? We’ve been working on this around the last month or so, we’re going to have updates over the next one to two months but in essence you can get to 355, from what early projections are showing us, in half to two-thirds the time instead of just going straight new construction,” Downey said on Tuesday.
“And what that is is, other than MCMs and PCs, it’s basically SLEP the entire Navy. I won’t comment on nuclear ships right now, but it’s everything else – essentially one more docking to get as many more years as we can out of all those ships. … In that SLEP effort, we’re also looking at whether we can extend LCSs at least five more years as well.”

Downey further addressed the topic on Wednesday, adding that the Navy can only get to about 310 ships without the SLEPs and without accelerating shipbuilding. If both new construction and SLEPs are leveraged, on the other hand, the Navy can get to a fleet of more than 360 ships by 2037, just 20 years from now.

“Where we are in the analysis right now is a combination of efforts: accelerating new construction, as well as SLEPing the ships. And where new construction would take you out to beyond 2040 or 50 to potentially get [to 355 ships], it looks like in the late ‘20s to early ‘30s you could get there with a combination of acceleration and SLEPing the rest of the classes,” Downey said, adding that it would cost in the tens of billions of dollars to SLEP and continue to operate these existing ships but would cost hundreds of billions of dollars to get to 355 with all new construction.

A previously discussed idea to bring Oliver Hazard Perry-class frigates back into service seems to be losing steam, though. Though there has been some talk of bringing back these inactive ships, many of which are slated for foreign military sales – CNO Richardson previously said the Navy was looking at the idea, and Commandant of the Coast Guard Adm. Paul Zukunft recently suggested the Navy bring them back but not bother to invest in high-end combat systems, instead relegating the frigates to supporting Coast Guard law enforcement detachments in U.S. 4th Fleet – there seems to be much less interest in doing so than there is for extending the lives of still-active warships.

“We also don’t want to leave any rock unturned, so we’re going to take a look at the ships that are in the inactive fleet today, see if there may be some relevance in there as well. Most of the ships are older and probably don’t have any utility for us, but we’re going to take a pretty close look to convince Congress and Navy leadership that we’re not leaving any rock unturned,” Moore said.

Downey said he was going to brief new Navy Secretary Richard V. Spencer on the frigate re-activation study this month, but both he and Moore sounded less positive about the cost-benefit of doing so.

The Navy recently spent nine months returning two frigates to service for Taiwan, at a cost of just shy of $100 million per ship. 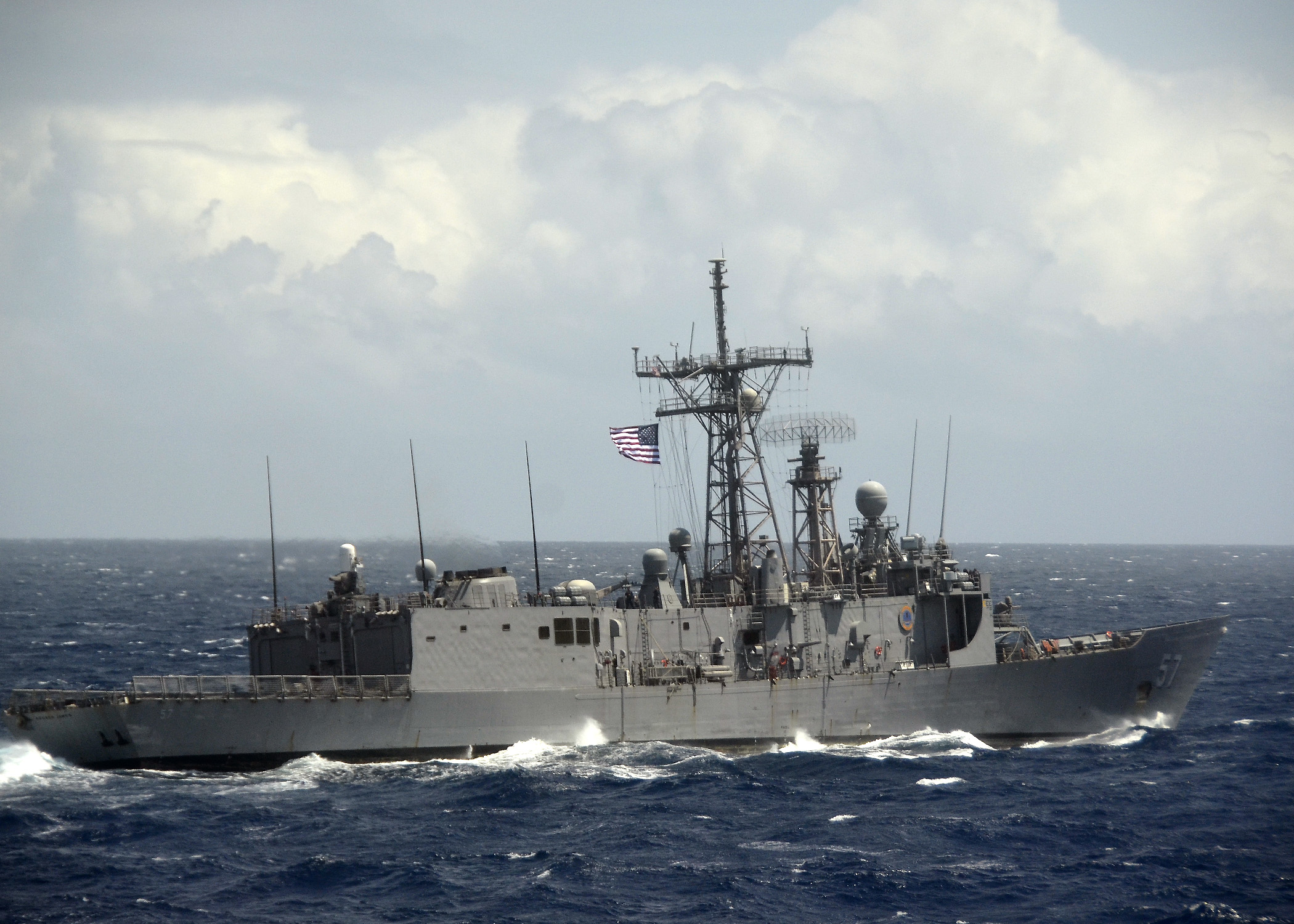 “That’s for Taiwan’s requirements, that combat system is not a system we currently use,” Downey said. He noted the U.S. Navy sometimes uses inactive ships as parts donors to support active ships, and addressing those hull, mechanical and equipment (HM&E) deficiencies, along with installing sufficient combat systems and command, control, computers, communications and intelligence (C4I) systems, could bring the cost up to hundreds of millions of dollars per hull.

“They really don’t have a combat system on today, in most cases we’ve taken what little combat system they had off. And what combat system they had was obsolete and not used today,” Moore said.
“So if you wanted to use them for operating in the 4th Fleet [area of responsibility], I think that’s probably something that we could go look at as an idea … but I think it comes down to, again, what’s the investment that you’d have to make in those ships to get them into a material condition from an HM&E perspective to go do those missions? We’ve taken a quick look at that, it’s something probably on the order of $75 million per ship, just a rough guess, to bring those back – and that’s really without a combat system on it, so then you’d have to go talk about, what do you want to put on it for some basic level of navigation, communication. So we’ll look at it and I think that’s going to be in the next discussion.”

Moore concluded, “it’s not in my lane to make this call, but if you had a ship that could only do this one mission in the 4th Fleet AOR, is that good enough?”