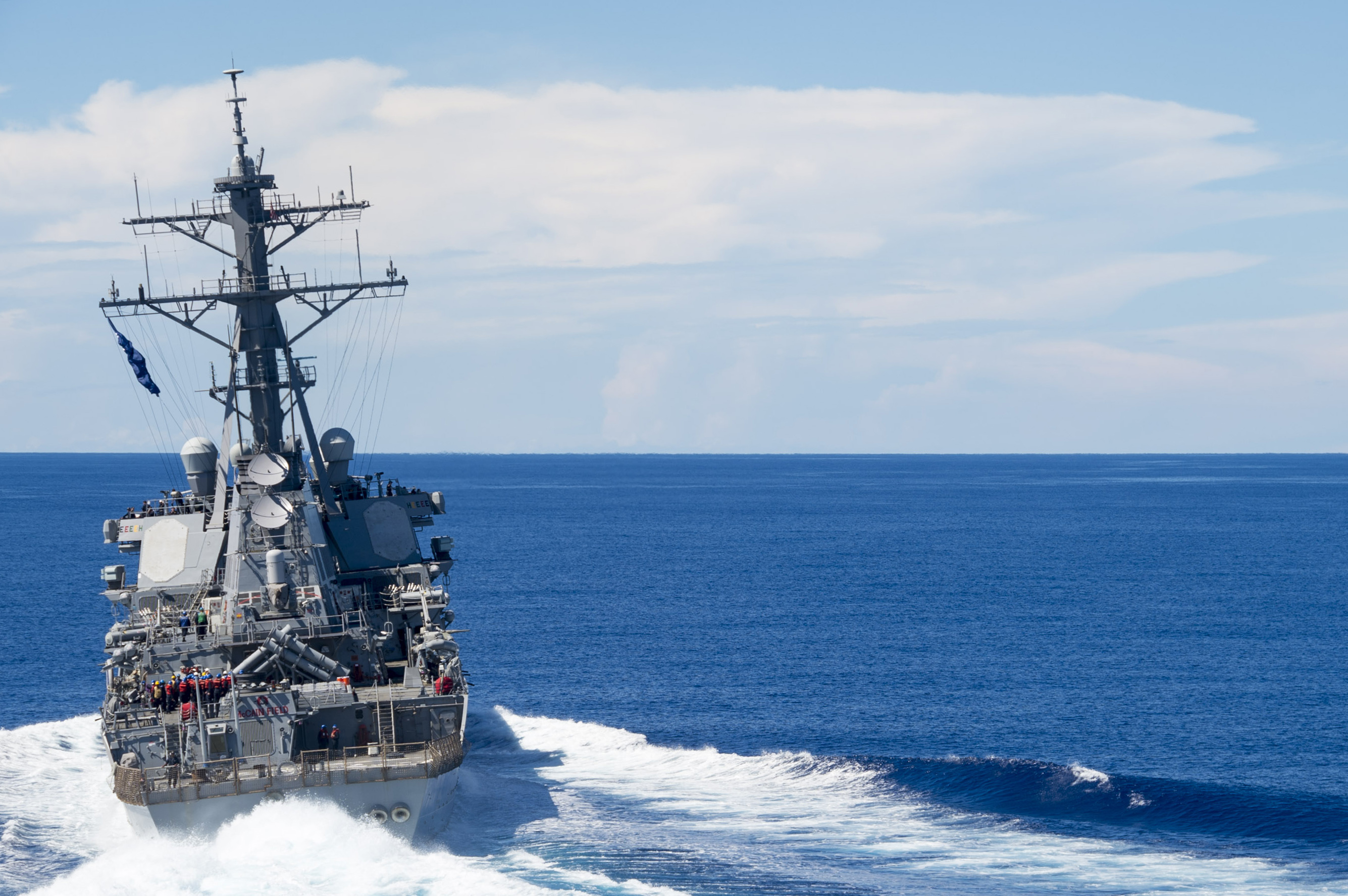 A U.S. guided-missile destroyer came within 12 nautical miles of the contested Chinese installation built on an artificial island off the coast of the Philippines on Thursday, a defense official confirmed to USNI News.

The freedom of navigation operation was first reported by Reuters on Thursday morning and is the third under a new schedule the Office of the Secretary of Defense and U.S. Pacific Command gave to the Trump White House earlier this year.

A Pentagon official would not confirm to USNI News that the operation took place but issued a statement saying that freedom of navigation operations were a standard part of the U.S. tool kit.

“U.S. forces operate in the Asia-Pacific region on a daily basis, including in the South China Sea. All operations are conducted in accordance with international law and demonstrate that the United States will fly, sail, and operate wherever international law allows,“ Marine Lt. Col. Christopher Logan said in a statement.
“We are continuing regular FONOps, as we have routinely done in the past and will continue to do in the future. Summaries of these operations will be released publicly in the annual FONOps report, and not sooner.”

Unlike other freedom of navigation operations, a U.S. passage past Mischief Reef is the least ambiguous challenge to China’s artificial island campaign. While China has expanded other points in the South China Sea, the majority of those holdings are above the waterline at high tide, commanding a territorial sea requiring warships to ascribe to a certain operating procedure known as an innocent passage.

Mischief Reef is a low-tide elevation feature, which means that at high tide the original reef had been underwater. Under the United Nations Law of the Sea Conventions, the feature does not command a territorial sea that requires innocent passage conduct inside the 12 nautical mile ring around the feature.

The U.S. sailed past Mischief in May for the first time in an aggressive operation in which guided-missile destroyer USS Dewey (DDG-105) came with in six nautical miles of the base on Mischief Reef and stayed in the 12 nautical mile ring for about 90 minutes, cruising in a zigzag pattern and at one point conducting a man-overboard drill, USNI News reported at the time. 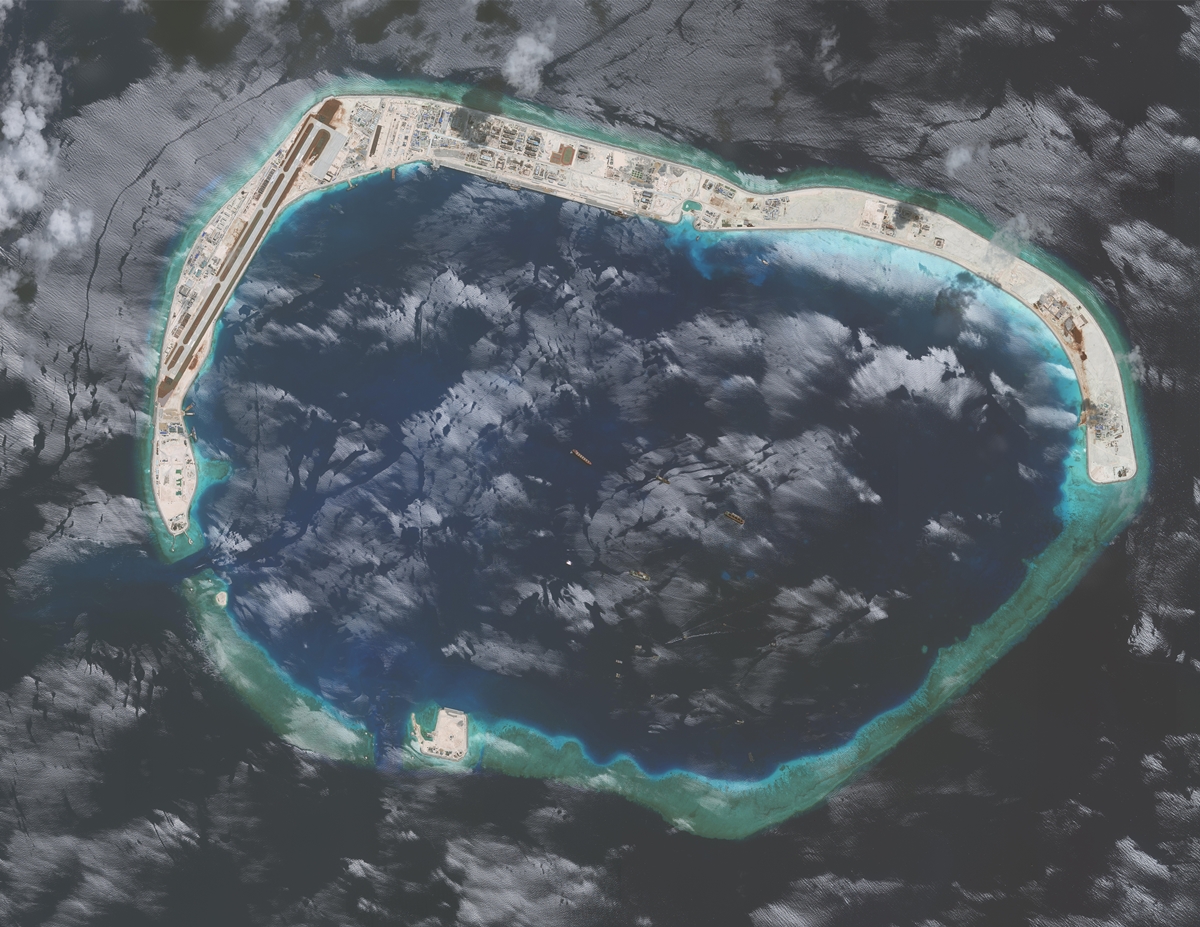 “This is in my view the most significant of these [FONOps]. Not only does it challenge China’s maritime claims in the South China Sea, it shoehorns in a challenge to China’s claim of the feature,” James Kraska, a professor of international law, oceans law and policy at the U.S. Naval War College’s Stockton Center for the Study of International Law, told USNI News in May.
“The rationale is if the U.S. doesn’t recognize innocent passage there’s no territorial sea, and if there is no territorial sea there is no ownership by China.”

A defense official told USNI News on Thursday that the most recent operation was much less aggressive than the FONOp in May.

In addition to the two Mischief operations, the destroyer USS Stethem (DDG-63) came past Triton Island in the Paracel Island chain to test excessive claims by China, Vietnam and Taiwan in July.

USNI News understands that in April, Pentagon leadership presented the White House a schedule of FONOps the U.S. could execute in coordination with planned deployments.

Destroyer McCain is part of the U.S. forward-deployed naval forces based in Japan. The ship is named for the former U.S. Pacific Command Commander Adm. John S. McCain Jr.