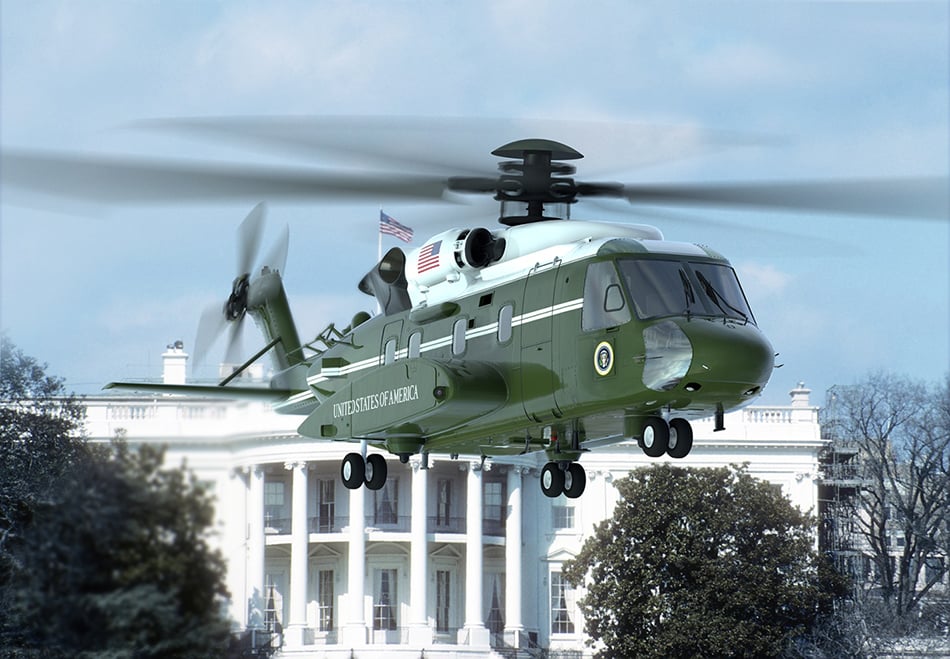 Lockheed Martin announced the successful first flight of a test VH-92A, configured for use by Marine Helicopter Squadron One (HMX-1), and ultimately destined to transport the President and other dignitaries.

As part of the Presidential Helicopter Replacement Program, the Sikorsky VH-92As – a variant of the S-92 helicopters – are slated to replace the aging fleet of Sikorsky VH-3D and VH-60Ns operated by the Marine Corps as executive transports.

“This first flight of the VH-92A configured test aircraft is an important milestone for the program,” Spencer Elani, director VH-92A program at Sikorsky, said in a statement.
“Having independently tested the aircraft’s components and subsystems, we are now moving forward to begin full aircraft system qualification via the flight test program.”

The first flight and a follow-up flight, which both occurred on July 28, signal the start of Sikorsky’s 250-hour flight test program at the company’s test facilities in Owego, N.Y. During the flights, VH-92A conducted hover control checks, low-speed flight and a pass of the airfield. The total combined times for the two flights was one hour.

The VH-92A is scheduled to enter into service in 2020 and production is planned to conclude in 2023. Sikorsky aircraft have flown every U.S. commander-in-chief since President Dwight D. Eisenhower.

“With this successful first flight on the books, we look forward to completion of Sikorsky’s flight test program, operational testing and production of this aircraft to support the Office of the President of the United States,” said U.S. Marine Corps Col. Robert Pridgen, program manager for the Naval Air System Command’s Presidential Helicopter’s Program Office in a statement.

The Navy awarded Sikorsky a $1.24 billion fixed-price incentive engineering and manufacturing development contract to produce six aircraft – two test helicopters and four production helicopters. The contract also included options for an additional 17 aircraft, expected to be finalized in 2019. The second test helicopter is expected to take its first flight later in 2017.

To become a VH-92A, Sikorsky is modifying its commercial S-92A aircraft, assembled in Coatesville, Penn., to include government-defined mission systems and an executive interior, according to the company.

Sikorsky was the lone bidder for the work and has since been bought by former competitor Lockheed Martin. In 2009, a former bid to replace presidential helicopter program was won by a Lockheed Augusta Westland team, but was canceled due to cost overruns.