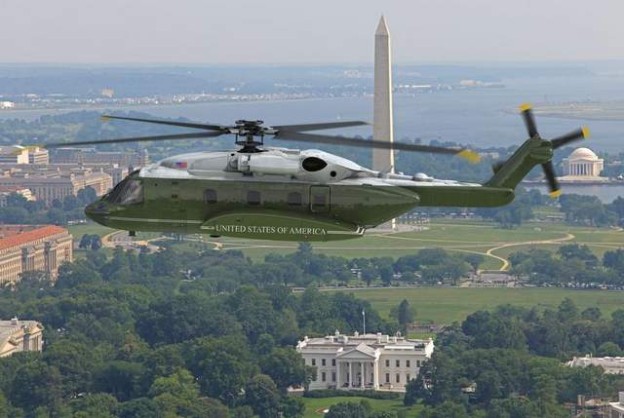 A modified version of Sikorsky’s S-92 commercial helicopter will likely be the only bid to replace the long-serving VH-3D Sea King as the next presidential helicopter, according to a Wednesday report in Defense News.

Two other groups — a team from AgustaWestland and Northrop Grumman and a teaming effort between Bell and Boeing — that had expressed interest in designing and constructing 21 of the so-called VXX presidential helicopter have dropped out of the competition, according to reports.

The AgustaWestland – Northrop team was set to offer a modified version of its AW101 helo. Bell-Boing said it considered variations of its Army CH-47 Chinook and the V-22 Osprey.

A Sikorsky and Lockheed Martin were the only known competitors that confirmed they had planned to submit bids.

The Navy — the service taking the lead for the program — would not comment which companies have submitted bids for the VXX request for proposal (RfP) — due Thursday.

“As the contracting agency, we cannot disclose anything about the offerors, according to a Thursday Navy statement provided to USNI News.

“The offerors are allowed to self-disclose if they desire. The number of offerors will be disclosed upon contract award.”

AgustaWestland’s decision to bow out of the competition was first reported on Sunday by The New York Times.

In a statement to Defense News, the company said “we determined we were unable to compete effectively given the current requirements and the evaluation methodology defined in the RFP. There are fundamental proposal evaluation issues that inhibit our ability to submit a competitive offering, and that provide a significant advantage to our likely competitor.”

Boeing also said the conditions of the RfP caused its team to not submit a bid.

“While both the Boeing H-47 Chinook and the Bell-Boeing V-22 are often used to transport military and government leaders in theaters of operation, we do not believe these aircraft would be competitive for this program as it is currently structured,” Defense News reported.

The current competition follow a June 2009 VXX program — won by a Lockheed Martin and AgustaWestland team— that was canceled due to cost over runs and a major point of contention during the 2008 U.S. presidential race.

The deadline for RfP submissions was 2 p.m. EST.