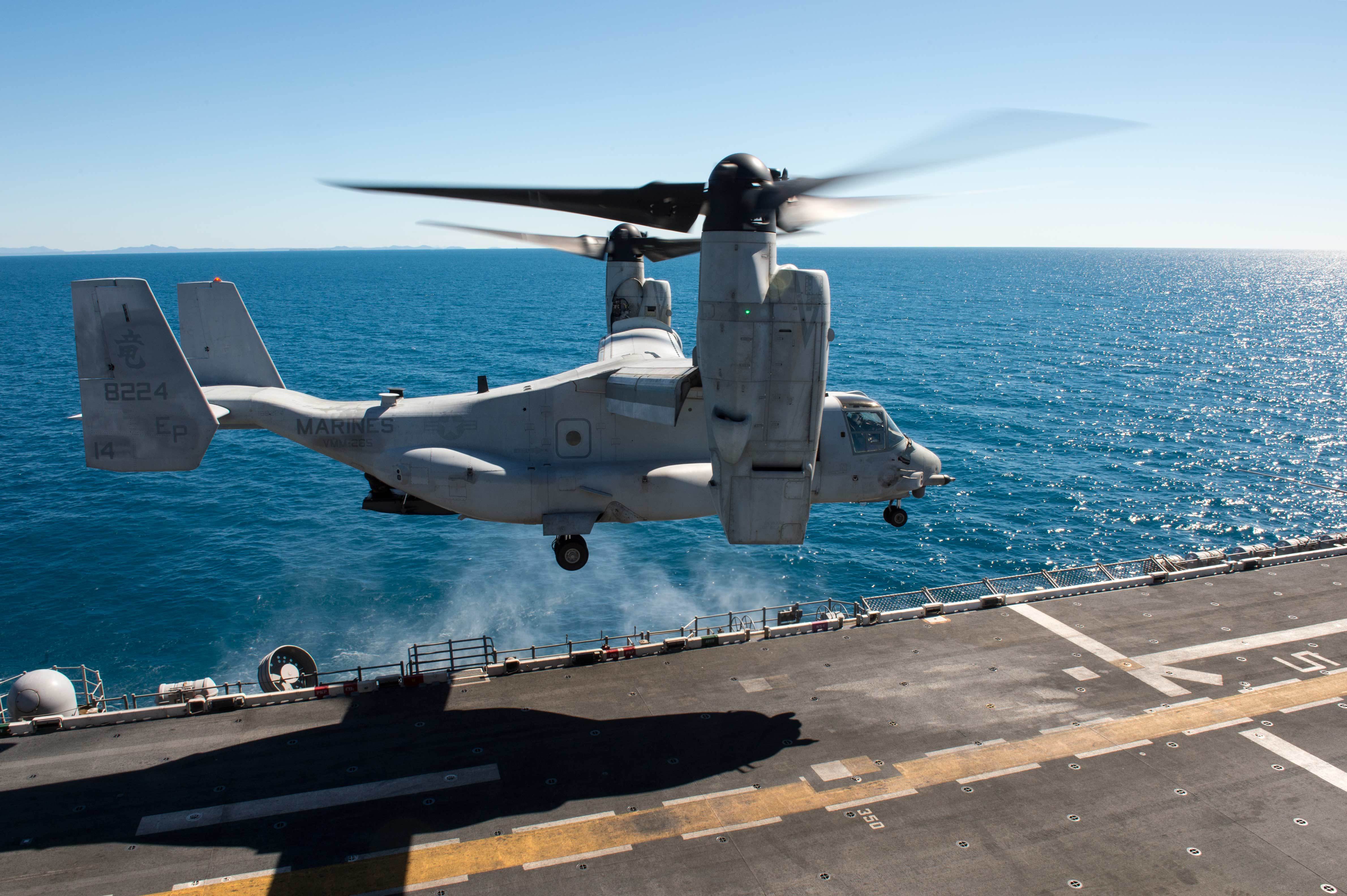 An MV-22B Osprey, assigned to the “Dragons” of Marine Medium Tiltrotor Squadron (VMM) 265 (Reinforced), takes off from the flight deck of the amphibious assault ship USS Bonhomme Richard (LHD 6) on July 20, 2017, during Talisman Saber 17. US Navy photo.

The Marine Corps identified the three Marines still missing and declared deceased after Saturday’s MV-22 Osprey crash off the coast of Australia. Two Marines were Osprey aircrewmen from Marine Medium Tiltrotor Squadron 265 (VMM-265), and the third was a passenger on the aircraft.

“The loss of every Marine is felt across our entire Marine Corps family. To the families of the brave Marines we lost – there is no way for us to understand what you are going through,” Col. Tye Wallace, commanding officer of 31st Marine Expeditionary Unit, said in a Marine Corps news release.
“What we do know is that your Marines left a lasting impression on the 31st MEU, the Marine Corps, and the world. They will live on forever in our thoughts and our hearts. You will always be a part of the Marine Corps family, and you will remain in our prayers.”

The Osprey crashed Saturday after taking off from amphibious assault ship USS Bonhomme Richard (LHD-6) and while on final approach to amphibious transport dock USS Green Bay (LPD-20). Twenty-three of the 26 aircrewmen and passengers were rescued by small boats and helicopters, but Cross, Ordway and Velasco were not recovered from the water. On Sunday morning the Marine Corps declared the ongoing effort a recovery rather than rescue mission. An Australian Navy dive team began operations today to salvage the Osprey from the water, approximately 18 miles off the coast of the Shoalwater Bay Training Area, Queensland, Australia, according to the news release.

31st MEU had been in the Coral Sea for Exercise Talisman Saber, an amphibious exercise with the Australian Navy and other Pacific partners. The Bonhomme Richard Amphibious Ready Group and 31st MEU had been conducting routine operations in the area since the exercise formally ended.

3rd Battalion, 5th Marines, where Velasco was assigned, was designated the Marine Corps’ “experimental battalion” and was assigned to deploy as the ground combat element with 31st MEU this spring while testing out new organizational structure, new technologies like unmanned systems and more.