Talisman Saber, a high-end biennial exercise with the United States and Australia, provided an opportunity to conduct Upgunned ESG operations in a complex warfighting environment ahead of the introduction of the F-35B Joint Strike Fighter, which could combine with the Navy’s cruisers and destroyers to bring a major leap in capability to forces at sea.

“The concept is to take the capabilities that the amphibious ships with the F-35B Joint Strike Fighter bring, combine that with the offensive capabilities of surface ships,” he said.
“The amphibious force brings the expeditionary offensive capability of the Marine Corps as our primary mission. … And land-attack cruise missiles that our cruisers and destroyers bring offer another power projection option. But in order to bring those offensive capabilities to bear, you have to have confidence you can get them through the blue water and littorals. … And so in order to do that, we’ve got to be able to defend ourselves, and the multi-warfare-capable ships that they operate provide that; cruisers and destroyers bring the ability to defend the amphibious force” from threats in the air, surface and subsurface, given the extensive sensors the on the surface combatants and carried by the helicopters those ships deploy.”

Dalton made clear that the Upgunned ESG concept is still in development right now, but he said that Talisman Saber 2017 created a lot of confidence in the idea and a lot of expertise in how to command and control this organization, which adds a “sea combat commander” role to the organizational structure of the ESG.

The exercise proved the amphibious forces was “able to effectively operate successfully in the exercise against the exercise opposition forces, so that has validated the concept and given my staff a tremendous amount of confidence in our ability to operate in complex environment, with challenges in all the domains – air, surface, subsurface – at the same time,” Dalton said.

A Navy news release on the exercise explains that, while amphibious ships have some organic capability to protect against threats in the air, surface and subsurface, the destroyer brings not only a greater detection capability but also the ability to hunt down and destroy threats to the amphibious force. The destroyer and its MH-60R detachment could be hunting and killing submarines, for example, while the amphibious ships prepared to project Marines ashore.

The addition of the surface combatants – in this case the destroyer and frigates – and their added air-defense and sea-defense capabilities has “enabled us to operate in a higher-threat environment where there was more risk to the force, or it allowed us to create greater effects. And we have demonstrated that, the ability to operate offensively and defensively in all three of those domains just with our organic force. Certainly we get support from land-based aircraft and from the carrier strike group, that all adds capability, but the organic capability of just the expeditionary strike group, we were able to … effectively operate in a very complex tactical situation,” Dalton said. 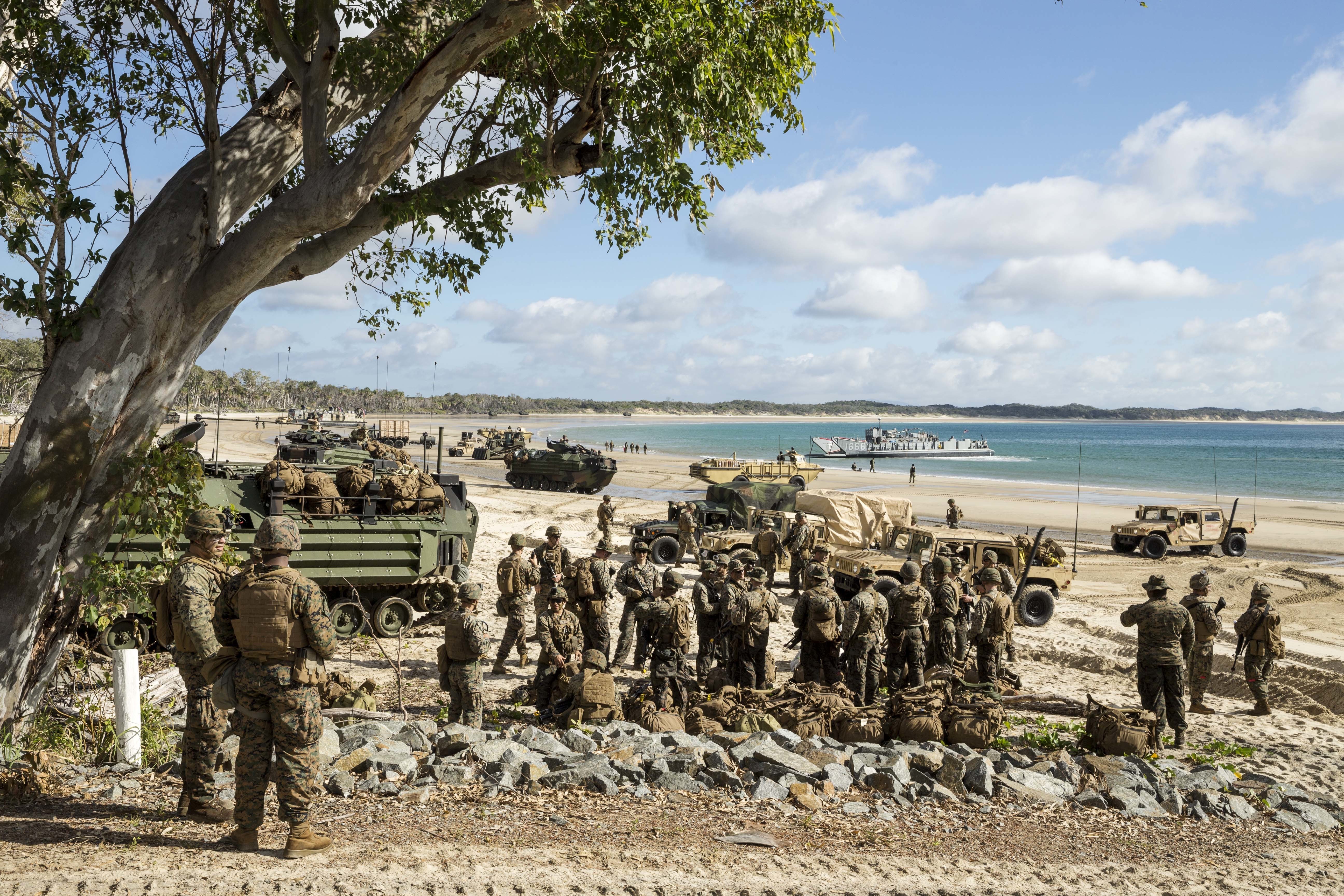 Bonhomme Richard is currently the flagship of the Navy’s forward-deployed amphibious force operating out of Japan. Later this year it will be replaced by USS Wasp (LHD-1), which has already undergone modifications to operate the F-35B. Dalton said his staff will remain in Japan, transferring from Bonhomme Richard to Wasp and therefore retaining all the institutional knowledge gained from the recent Upgunned ESG operations. When the Wasp ESG deploys out of Japan for the first time with the F-35B onboard, it will be able to fold the new airplane into the Naval Integrated Fire Control-Counter Air concept (NIFC-CA). The plane collects a massive amount of data with its sensors; targets could therefore be shared with the surface combatants and their Aegis Combat Systems and prosecuted with the ships’ Standard Missiles or other weapons. While that type of operation will come with a learning curve, Dalton said the operations in Talisman Saber this year got his staff used to the Upgunned ESG command and control setup, making it just a bit easier to add in the F-35B later this year.