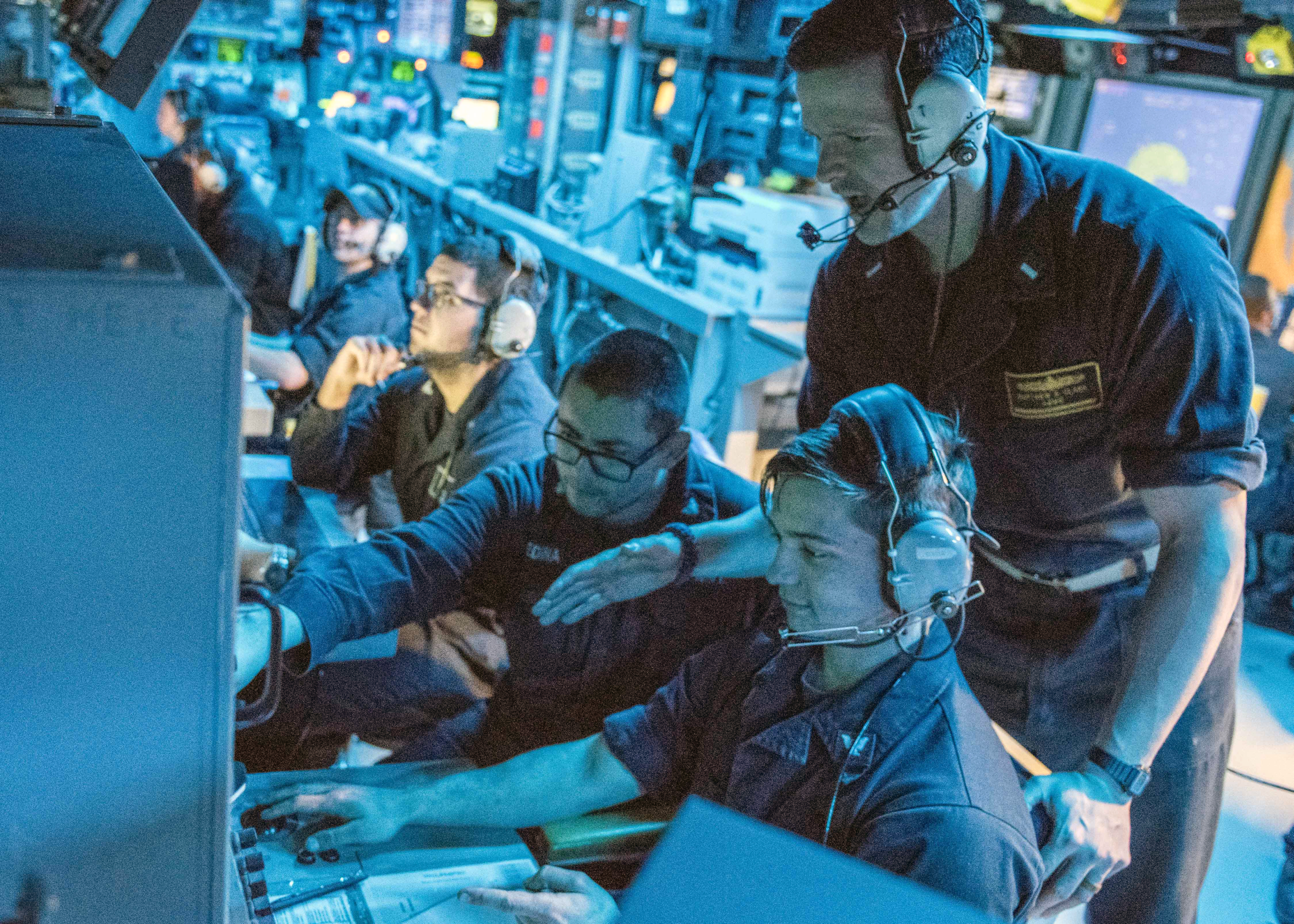 Lt. j.g. Matthew Clark, assigned to the Arleigh Burke-class guided-missile destroyer USS Mahan (DDG 72), talks to sonar technicians about attack options during anti-submarine warfare training. Surface combatants can use active or passive detection to find subs, whereas submarines are limited to passive detection if they want to stay stealthy. DARPA’s MOCCA program would allow submarines to deploy an unmanned underwater vehicle to conduct active sonar search missions on its behalf while staying stealthy. US Navy photo.

The Defense Advanced Research Projects Agency (DARPA) awarded BAE Systems a $4.6 million contract for an unmanned underwater vehicle that would help U.S. Navy submarines detect adversary subs while minimizing their own risk of being detected.

Whereas surface ships conducting anti-submarine warfare can use a combination of active and passive sensors, submarines use passive detection systems to listen to their surroundings without putting out any pings, to maintain their own stealth. According to a Broad Agency Announcement released last year at the start of DARPA’s Mobile Offboard Clandestine Communications and Approach (MOCCA) program, MOCCA would leverage the benefits of active sonar systems while protecting the submarine’s location, since the pings would be coming from a UUV at some unknown distance from the submarine.

“The MOCCA program seeks active sonar solutions that will mitigate the limits of passive submarine sonar sensors. The objective is to achieve significant standoff detection and tracking range through the use of an active sonar projector deployed offboard a submarine and onboard an Unmanned Underwater Vehicle (UUV). The submarine will need the ability to coordinate the operational functions of the supporting UUV. Thus, the program must also demonstrate the ability to achieve reliable clandestine communications between the host submarine and supporting UUV without sacrificing submarine stealth,” according to the BAA.

The contract award for MOCCA Phase 1 covers the development of an active sonar suitable for small UUV operations and a secure communications link to connect the UUV to its host submarine. The UUV itself would be 21 inches in diameter or smaller, and may operate in littoral waters, the bottom of the ocean and other challenging environments.

“Advances in maritime technology are critical to the Department of Defense and an area where the U.S. military can continue to strengthen its advantage,” Geoff Edelson, director of Maritime Systems and Technology at BAE Systems, said in a company news release.
“With the resurgence of near-peer competitors and an increasing number of submarines, MOCCA technology will provide Navy submariners with a vital asymmetrical advantage against a rapidly proliferating undersea threat.”

On the sonar side, the BAA notes that “a small UUV is disadvantaged as a host for an active sonar projector” because the small size and power output means that “high-output transducer materials” and an energy-efficient projector are required. The BAA also notes that advancements in the sonar processing and “precision localization capability” are needed – the latter because imprecise active sonar usage could accidentally illuminate the host U.S. Navy submarine, compromising its stealth.

On the communications side, “the communications link between the host submarine and the UUV will be used to control the UUV and its sonar payload, and to communicate information generated on the UUV back to the host platform. The MOCCA system will be used during an engagement, so proper control of the UUV is critical,” according to the BAA. “Link throughput, delay, and reliability trades should consider the need for reliable operation during combat. An ideal link would have a low probability of intercept and of exploitation and provide high link reliability. The MOCCA communications link cannot degrade submarine stealth.”

The comms link could leverage acoustic, optical, and relayed Radio Frequency (RF) signaling modalities, according to the BAA, must have significant range and will be evaluated for its Low Probability of Intercept and Low Probability of Exploitation characteristics.

The BAA outlined a 51-month, three-phase program, which starts with this contract award to BAE Systems for a 15-month Phase 1 research and development effort of the communication link and the sonar, with sub-system prototypes developed and demonstrated. If successful, DARPA could compete another contract for Phase 2 – at-sea system-level demonstrations of MOCCA technologies – and an option for Phase 3, an 18-month effort to integrate and test MOCCA with a submarine at sea.