Britain’s defense minister said London views its departure of the European Union as an opportunity to step up its ability to deter the Kremlin’s aggressiveness along its borders with the West, monitor Moscow’s increased submarine activity in the North Sea and the Atlantic and ward off Russian intrusions into the United Kingdom’s and other nations’ airspace.

Michael Fallon, speaking Friday at the Center for Strategic and International Studies, cited the United Kingdom’s deployment of ground troops to Estonia and Poland to reassure Baltic and eastern members of NATO as part of agreed-upon forward presence, as well as the sending Royal Air Force Typhoons to Romania and Royal Navy warships to the Aegean and Mediterranean as visible evidence of its commitment to collective defense. It also demonstrates London’s willingness to work cooperatively with other European countries in dealing with the steadily rising migrant flow from Libya toward Italy in particular.

As for Russia’s loudly voiced concerns about this stepped-up deterrence, “we’ve been absolutely transparent” in the deployment and the exercises NATO and countries in the alliance have been conducting. He added Moscow continues to remain silent on the movement of its forces close to its western borders in possible exercises or new deployments.

“NATO must transform itself into a far more agile organization” with “a 360-degree approach” to defense and deterrence, he told the audience at the Washington, D.C., think-tank. That translates into faster decision-making. Like the United States, the United Kingdom has been pressing the 29 alliance members to spend at least 2 percent of their gross domestic product on defense, including significant investments in modernizing their forces.

Since the NATO conference in Wales several years ago, “we’ve seen a commitment to readiness” in the alliance and certainly by the United Kingdom.

“Agility will be critical … and perpetual” and that also means addressing the new challenges in the cyber domain. Fallon, who has held the defense post for three years, said in answer to a question that the United Kingdom’s investment in new equipment will not come at the expense of its army’s end strength. He said it will remain at 85,000 active-duty soldiers.

The army will be capable “of fighting at the divisional level” while the United Kingdom is increasing the size of the Royal Air Force and Royal Navy, he said as the session was ending.

In regard to the modernization of its forces, London has been a leader according to Fallon. Pointing to the United Kingdom’s commitment to building two aircraft carriers, he said Russia is showing “a bit of carrier envy” while at the same time it is investing like the United States in a new ballistic missile submarine.

“We have been buying a lot of high-end kit” from the United States, and he warned the administration not to adopt a protectionist attitude blocking United Kingdom firms from the American military marketplace.

With more than 130 British aircrews training in the United States of F-35s, he predicted they would soon be operating off American aircraft carriers and American crews off theirs. 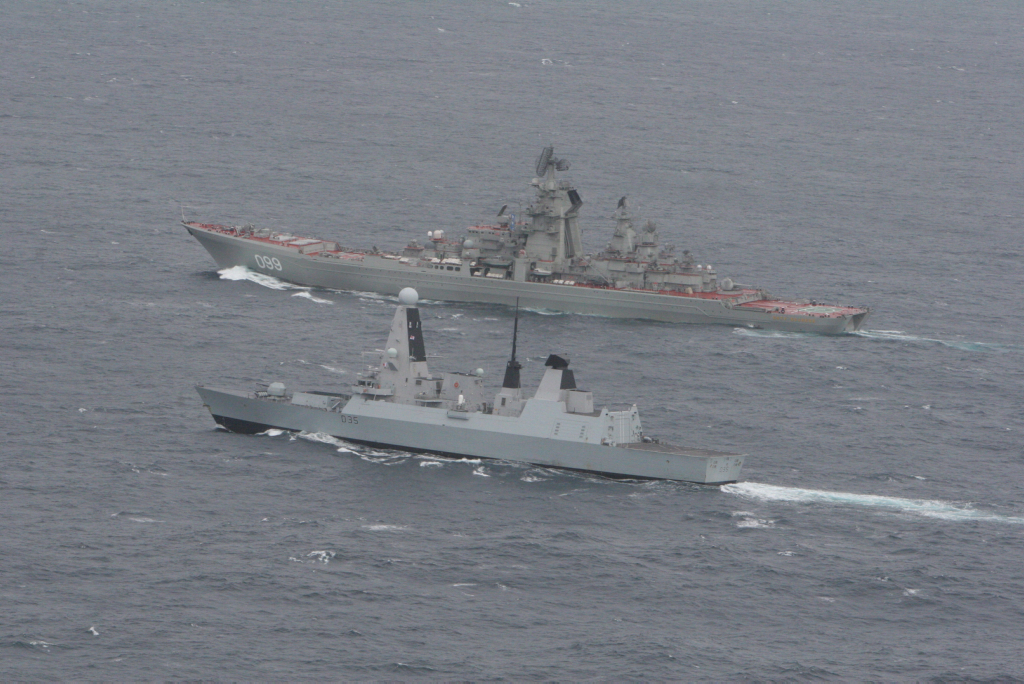 To counter increased Kremlin submarine activity, Fallon said the United Kingdom has entered into a trilateral agreement with Norway and the United States flying P-8s to track their movements. Using the same aircraft allows the three “to work more closely together.” Likewise, he said London has entered into new agreement with Sweden and Finland “to respond to these new threats” in the North Sea.

He termed Russian military pilots buzzing ships and flying dangerously close to alliance aircrat behavior “that is provocative and can be dangerous.”

Fallon said the alliance’s commitment to Afghanistan remains firm with the understanding of the need to have the Kabul government and its security forces firmly establish their legitimacy and allow the country’s fragile democracy to grow.

The struggle against the Taliban and other transnational terrorist organizations “can only be won by local forces.” He said the British are training the Afghan air force and counterterrorism forces.

In answer to a question, he said the Syrian civil war “is littered with cease-fire agreements,” regularly broken by the regimes of Bashar al-Assad and the Russians and sounded skeptical about establishing “safe zones” were civilians could escape the fighting that has been going on since 2011.

So far the “deconfliction machinery” covering air forces operating in Syria is working, but he was concerned about the future as the battle-space draws increasingly smaller as all sides in the war close in on Raqqah, the self-proclaimed capital of the Islamic State.