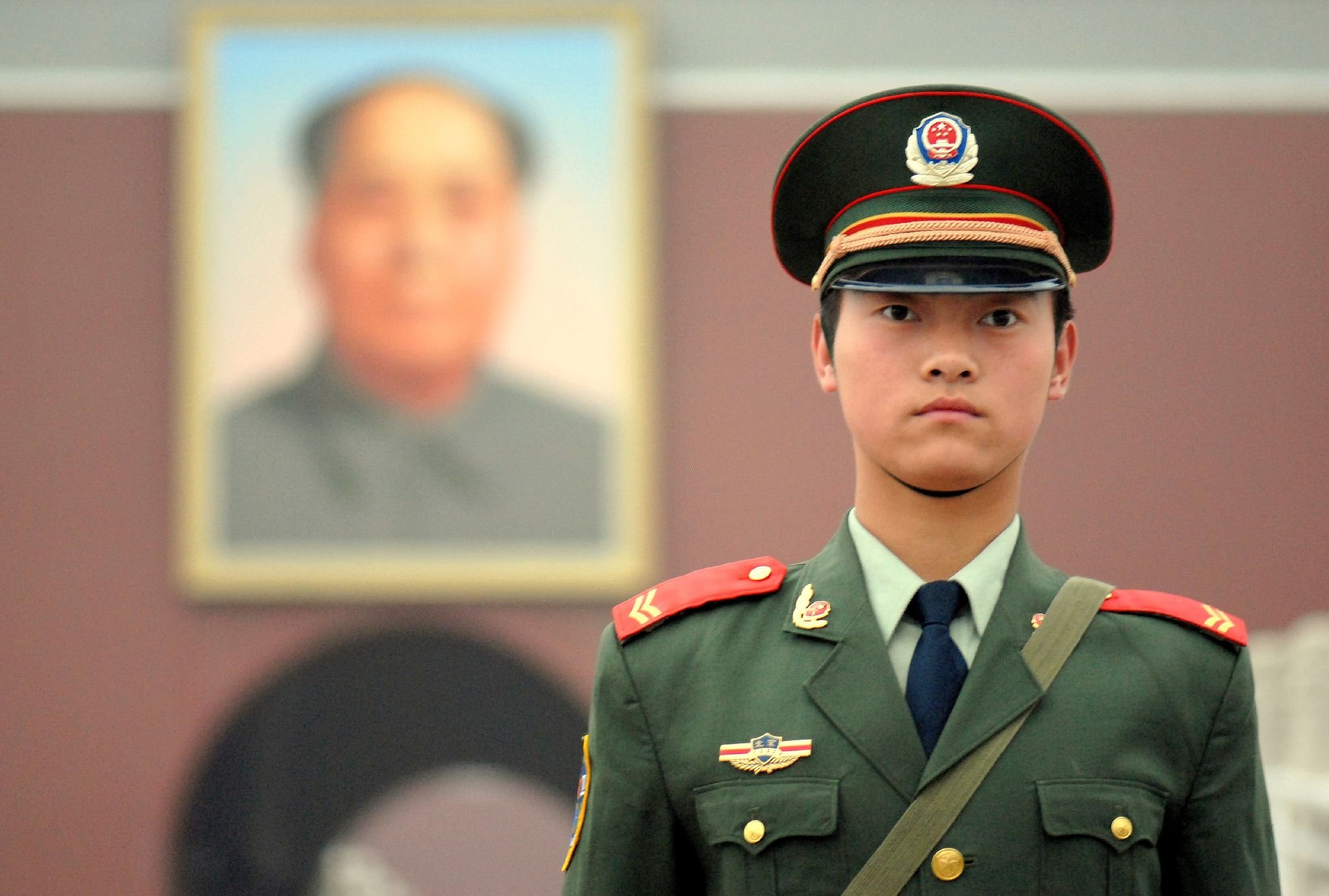 A Chinese People’s Armed Police guard on Tiananmen Square, in front of the portrait of Mao Zedong.

Because Beijing lacks the hard power of global military strength and the soft power to shape other nation’s attitudes through its economic diversity, one of China’s leading diplomatic scholars said it is not now in China’s interest as a rising power to try and take over the United States’ role in the world in maintaining international order.

Speaking Tuesday as part of a panel at the Heritage Foundation, a Washington, D.C., think tank, Jia Qingguo, dean of the department of diplomacy at Peking University, said in answer to a question, “China should expect the United States to live up its responsibilities” in maintaining the international order and where it can “China should help the United States.”

Jia acknowledged “maintaining the international order is a very costly business,” but the United States through its creation of a network of alliances, such as it has with Japan and Korea, use of U.N. organizations and development of various types of partnerships, such as it has India and others, has defrayed some of that expense.

The “U.S. has been quite successful in that role” as world leader, but now under President Donald Trump may be adapting a new approach of being less engaged globally, a stance that might benefit Washington in the short run but leave it weaker in the future.

David Finkelstein, director of China studies at CNA, said Beijing is “taking directions we not used to seeing in the past” in arenas of international engagement.

The reason: “China’s national interests are changing” to include global security concerns that range from evacuating more than 30,000 Chinese civilians from chaotic Libya in 2011 and establishing its first permanent overseas maritime base in Djibouti on the Horn of Africa.

Closer to home as an activist power, “Beijing also uses economic sticks” to bring Taiwan into line with a one-China policy, pressure South Korea to reject the deployment of the Terminal High Altitude Area Defense ballistic missile system and urge Japan to surrender its claims to islands in the East China Sea. It deploys economic carrots through its development bank and the “One Belt, One Road” initiative.

As an example of its new interests and Chinese assessments of them militarily, Finkelstein pointed to changes in the People’s Liberation Army. The PLA has shifted from only being a homeland defense force to protect the party’s control of the country and defend its borders.

Under President Xi Jinping but keeping the homeland mission, it also has focused on warfighting not only close to home but further abroad in a variety of domains. Similarly, there has been new emphasis placed on the PLA Navy’s ability to conduct long-range military operations. Beijing is also now saying it is developing a force to fight terrorists without relying on the U.N. for approval.

The idea in the minds of the Chinese leadership, Finkelstein said, is “to shape and not just react” to events in protecting their interests.

In many ways, China is behaving similarly to “rising powers” of the past as the United States was in the 19th century– riding on the coattails of the global power at the time, Great Britain, on international issues and a revisionist hands-off approach to other nations in America’s backyard through the Monroe Doctrine, Michael Green, an Asia expert at the Center for Strategic and International Studies, said.

“Our relationship is not a zero-sum game” with a winner and loser, Jia said that relationship can evolve over time on a host of issues.

Using North Korea’s continuing development of nuclear weapons as an example of change, he said, “At the beginning, [the Chinese] people were asking how much we can help North Korea” in ways to stop that program and build up Pyongyang’s economy. But now, “North Korea poses more of a security threat” and is viewed “as a strategic liability, not asset.”

Jia said now the Chinese are asking themselves “how much should we work with the international community” to end this threat.