A comprehensive review of the rising number of physiological episodes and the Navy’s response to those PEs determined the Navy’s oxygen-generation and cabin pressure systems are too complex for reliable performance, and that the process for reporting and investigating the root cause of physiological episodes is “fundamentally flawed,” according to the review released this afternoon.

U.S. Pacific Fleet Commander Adm. Scott Swift, who led the review effort, summed up the challenge of addressing the ongoing physiological episodes by writing in his cover letter, “this is a complex issue, one without a single cause, and therefore, without a single solution. The only common thread running through all of these cases is that aircrew were physically affected.”

The Navy has not allowed a single student pilot to fly since late March, when a stand down was ordered for the T-45C Goshawk trainer aircraft. The T-45 had experienced a large increase in cases of hypoxia due to problems with the Onboard Oxygen Generation System (OBOGS) that so far have stymied professionals at Naval Air Systems Command, the fleet, the medical community and more, who are conducting root cause analysis. Ten cases were reported in March 2017 alone, and 21 in the first three months of the calendar year – compared to 38 throughout all of calendar year 2016, 27 in 2015 and just 12 in 2014, according to data in an annex to the report.

The challenge of reining in physiological episodes – the collective name for either hypoxia, where a pilot receives insufficient or contaminated oxygen, or decompression sickness due to unsafe cabin pressure – predates the 2010 stand-up of a Physiological Episode Team, which was established after a noticeable jump in PEs between 2009 and 2010. The report notes that 2010 jump in events is likely due to increased awareness of decompression sickness and hypoxia, while better reporting in recent years means that post-2010 data is likely more reflective of the actual number of incidents in the fleet.

Vice Chief of Naval Operations Adm. Bill Moran ordered Swift to begin this comprehensive review in April. Speaking to reporters today, Moran said “as we all watched the surge in physiological episodes occurring in the fleet, going back to last fall, especially in the F-18 community, and then after the new year into February and March in the T-45 community, and we started to look at all the activity that was going on, both at the NAVAIR Systems Command, out in the fleet, down in the training command and elsewhere, I wanted to make sure that we were fully capturing all of the lessons learned from all that activity, making sure it was coordinated, and ensuring that we’re on a productive path to both sharing the information across all that activity but also to make sure we were all remaining focused on the root causes and applying the fixes we think we needed to go after.” 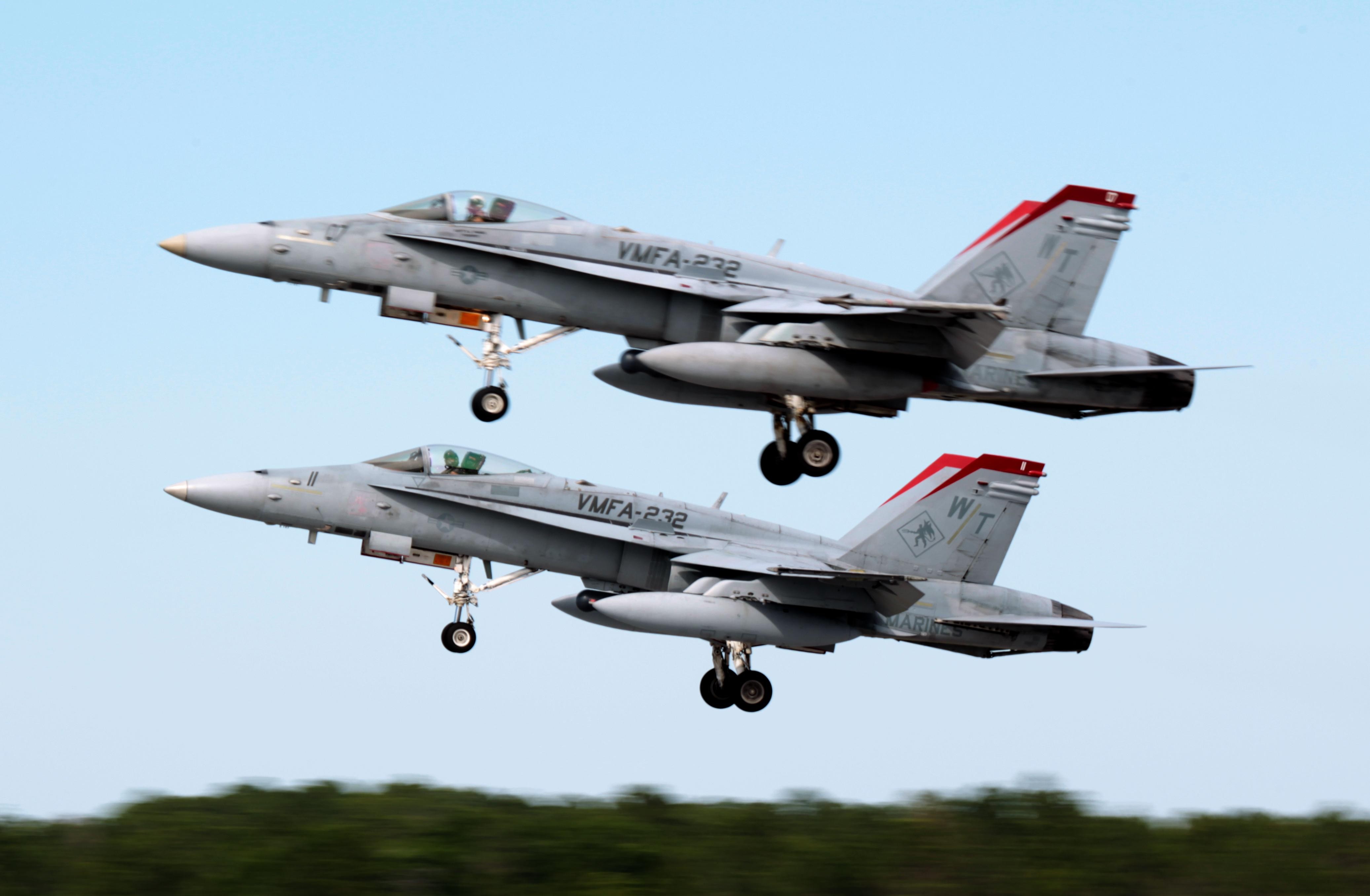 The comprehensive review notes several major challenges for the Navy’s ongoing efforts to identify the cause of these PEs and find a way to stop them. First, the report states “there is no single, dedicated entity leading PE resolution efforts” and therefore no unity in correction and mitigation efforts. The report recommends establishing a new organization to lead all naval efforts to resolve PEs, which would be led by a flag or general officer from the naval aviation community and – unlike the existing Physiological Episode Team – would exist for only a year or two until its mission was completed.

The report also criticizes the OBOGS and the Environmental Control System (ECS) themselves.

“The integration of the on-board oxygen generation system (OBOGS) in the T-45 and FA-18 is inadequate to consistently provide high quality breathing air. To varying degrees, neither aircraft is equipped to continuously provide clean, dry air to OBOGS – a design specification for the device. The net result is contaminants can enter aircrew breathing air provided by OBOGS and potentially induce hypoxia,” reads the report.
“The environmental control system (ECS) aboard T-45 and FA-18 providing cockpit pressurization is a complex aggregate of sub-components, all of which must function for the system to work as a whole. Aging parts, inadequate testing methodologies and numerous other factors are impacting Fleet ECS reliability, inducing several instances of Decompression Sickness (DCS).”

Among other recommendations, the report calls for a depot-level effort to inspect the entire ECS and OBOGS systems on F-18s – legacy F/A-18A-D Hornets, F/A-18E/F Super Hornets and EA-18G Growlers – beyond what can be accomplished during squadron-level maintenance. This would include “a comprehensive and holistic ‘end to end’ inspection” of all sub-components and piping. This type of deep dive is already taking place for F-18s that have experienced some type of failure in the Environmental Control System. It also recommends redesigning aircraft systems to meet OBOGS’ standards for safely generating breathing air. It also calls for the creation of an integrated life support system program office at Naval Air Systems Command (NAVAIR) that “manages Naval Aviation oxygen generation and connecting systems; cabin environment and pressurization systems; and physiological monitoring. This program must regularly leverage the lessons of other organizations managing similar technologies.” 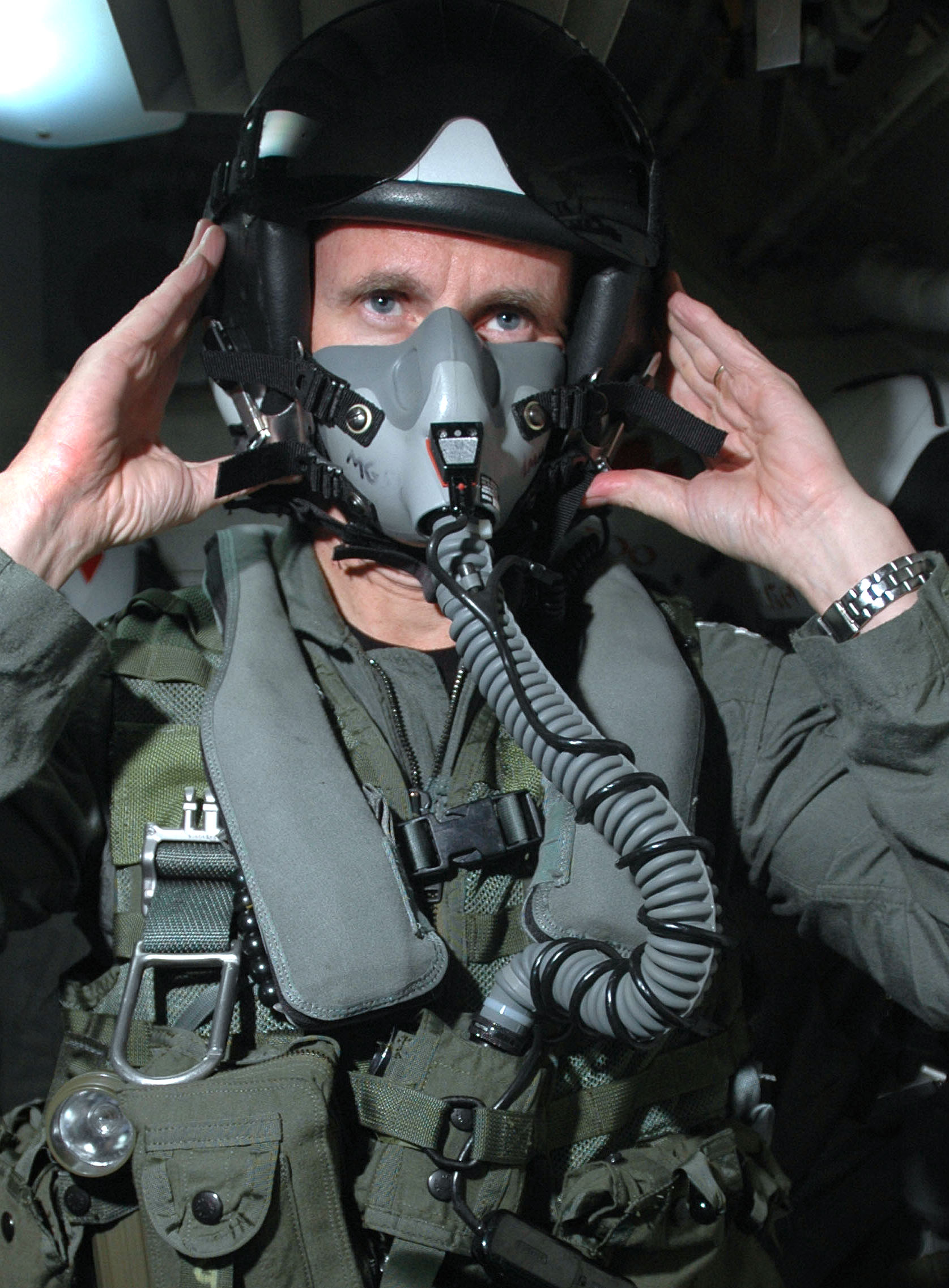 Then-U.S. Seventh Fleet Commander Vice Adm. Jonathan Greenert dons an oxygen mask and pilot’s helmet as he prepares for a flight in an F/A-18F Super Hornet, flown by the Diamondbacks of Strike Fighter Squadron One Zero Two (VFA-102), during his visit to USS Kitty Hawk (CV 63) in 2005. US Navy photo.

The comprehensive review takes aim at the processes currently used to identify and study PEs in the fleet: from a flawed reporting system that relies on self-diagnosis, to an “engineering-centric PR mitigation effort in which potential causes can be dismissed without full adjudication,” to NAVAIR’s “organizational alignment that does not reflect the complex, integrated human-machine nature of the PE problem” and looks at each component individually rather than studying the entire set of forces acting upon aircrews.

After reading the report, Moran told reporters that he had two big takeaways regarding how the Navy handled the evolving situation.

“Our normal response time in reacting to trends was insufficient to react to the pace of how quickly these issues were emerging in both the fleet and in the training command. But I would say we were especially slow to reacting to what was going on in T-45s. Our focus was clearly on the fleet and the F-18 community in the fall, and we were slow to react in the T-45 community,” the VCNO said.

Additionally, he noted “our failure to communicate effectively down the chain of command, right down to the cockpit, to our instructors and our students who were operating high-performance complex machines. We could have and should have done better in communicating what we were learning and what we were doing about it so we kept everybody informed.”

Until an ongoing root cause analysis turns up any answers, not much may change for the f-18s immediately. Moran said planes that experience ECS failures will continue to be torn apart in the depot to look for potential component failures that led to a physiological event.

“Over time, as we continue to analyze those components, if one appears to be the principle culprit we would naturally go after replacing those components throughout the fleet in a phased approach,” he said, and then those components would be replaced on a time schedule instead of waiting for them to fail.

The T-45s, which are still not being flown by students, are in for some big changes in the near-term. Moran rattled off a list of components that F-18s have that the T-45 does not that may contribute to the spike in PEs in the trainer jet.

“We do not have a water separator mechanism in the OBOGS system for the T-45, where we do on similar OBOGS systems in high-performance jets. If you talk to anybody who studies oxygen systems on an airplane, it’s very clear that you need clean, dry air that is being delivered to the air crew in the right pressure and the right volume. Without a water separator in that system, we believe that there’s a potential for water moisture to get in there and not provide the effective dry air that could cause issues with the right pressure and volume. So installing the water separator is critical, so we’re on path to do that. We’ve got 25 or so that are installed and we’re on a path to complete that by the end of the summer, early fall. So that’s one,” the admiral told reporters today.
“Another one that continues to the water moisture in the line in the bleed air shutoff valve that is right at the exit point for the air that comes off the engine and starts into the OBOGS system. For a lot of reasons, years ago that bleed air valve was causing problems because it was shutting off without warning, those sorts of things, and so we either hard-wired them open or took them out altogether. So our analysis is we need to go back and re-engineer, redesign that bleed air valve so that it operates correctly and actually purges the system from water moisture coming off the engine. That is in the works and those valves will be delivered in a tapered way.”

Additionally, new masks are being delivered and instructor pilots are already taking some warmup flights with the new masks to make sure they’re comfortable using them.

“Sometime in the next couple weeks” students will begin warmup flights too, using the new masks, Moran said, and as soon as more T-45s are modified with the changes he outlined, the training schools will ramp up to full flight operations by the end of the summer.

“We’re getting back in the air very soon,” Moran promised.