WASHINGTON NAVY YARD – The Navy will begin exploring interest in its revamped frigate program soon, with the Program Executive Office for Littoral Combat Ships (PEO LCS) set to release a request for information (RFI) to industry by the end of the month.

Rear Adm. John Neagley, who heads PEO LCS, told USNI News in a June 2 interview that changing strategies for the upcoming class of frigates – originally slated to be an improved version of one of the current LCS variants, but now will be selected through a full and open competition with newly written requirements – has created a “good competitive space” for designing and buying the new class of warship.

In his first formal interview since assuming command last summer, Neagley told USNI News that “we’re going to put out an RFI here that will solicit to see who else might be interested in this, so we can get a feel for what the competitive space might look like. We’re working through what the details of that RFI would say, but I think given the size of the ship and the number of folks who build those types of ships, I expect we’ll get pretty good competition out of it.” 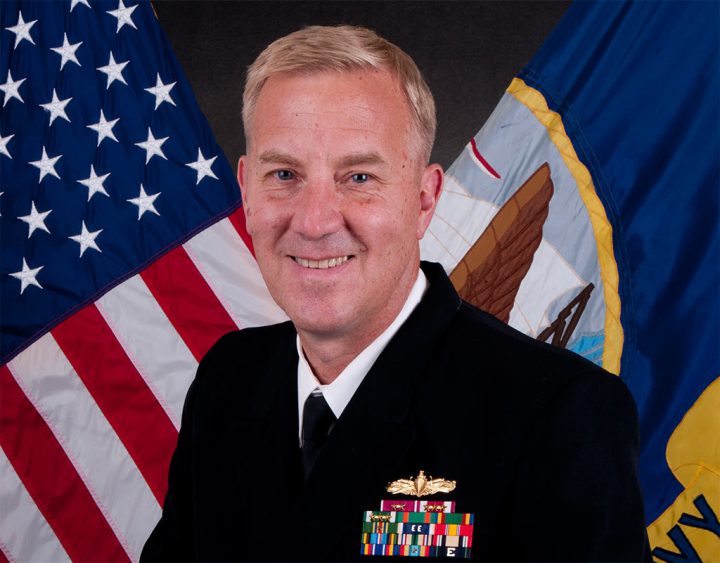 From 2014 until earlier this year, the plan was to select either Lockheed Martin and Fincantieri Marinette Marine’s Freedom-variant LCS or Austal USA’s Independence-variant LCS and create an up-gunned and up-armored version to serve as the frigate. The Navy earlier this year decided to take a fresh look at the frigate requirements, and in April the service announced it would hold a full and open competition for any domestic or foreign frigate design, as long as an American shipyard built the ships and the Navy could buy the technical data rights.

“We value competition. I think any time we can leverage the power of competition in acquisition it’s important for us to drive cost and affordability. So that’s the main driver” of the decision to allow additional bidders, he said.
“The requirement sets are different enough (from the LCS) that we could probably have more competitive space if we open it up, and that will give us opportunities to compete – and from our perspective competition is good, we get the best price and the capability we want, so I’m looking forward to doing that.”

Acting Navy Secretary Sean Stackley suggested last month that Lockheed Martin and Austal may have a bit of a leg up in the competition, with hot production lines and mature designs, and therefore the lower cost associated with those. He made clear that they would have to meet all the new operational requirements, which will include increased survivability, a greater air defense capability, and electromagnetic maneuver warfare capabilities for the more sophisticated operating environment the Navy expects its frigates to face.

“Coming in new, you may have some of that stuff already baked into your design, but you don’t have a hot production line,” Neagley said when asked about who may be advantaged in the upcoming competition.
“On the other hand, you have two [shipyard] who have been building ships and may be able to accommodate some of those things. So I think it’s a good competitive space for us, and we’ll continue to work through those requirement sets with N96 (the Navy’s surface warfare directorate) to make sure we got that right as we move forward.”

Both PEO LCS, led by Neagley, and N96, led by Rear Adm. Ron Boxall, have worked in tandem on the new frigate requirements, leveraging as much previous work as they could but also ensuring the requirements will lead to a ship that can operate in tough environments and be a relevant warfighting asset to the Navy for decades to come.

“We’ve been very very closely linked to the requirements team on this,” Neagley said.
“We have this requirements evaluation team that was stood up to look at the frigate requirements based on the new analysis we have that, hey, these ships are going to operate in a more contested environment, you’ve got to go look at what capability set is appropriate for that environment. We wanted to leverage the work we had already done in the existing frigate, we wanted to leverage the work that was done in the [Small Surface Combatant Task Force] a few years ago, and then take a set-based design approach now. … That group who did that had guys on the acquisition side and on the requirements side, so Ron Boxall and I both had folks on that team working it. So the requirements were both informed by trades, cost trades and capability trades – all that was looked at at once. I would say that was a good approach, and it’s going to help us moving forward with frigate. We’ll work this very closely together as we nail down the requirement to understand cost and schedule associated with that requirement.”

This frigate selection was previously scheduled to take place in Fiscal Year 2019, meaning the Navy would buy one LCS in 2018 and then pick either Lockheed Martin or Austal to build frigates in 2019 and beyond. Instead, the frigate detail design and construction contract will be awarded in 2020, meaning PEO LCS has to find a way to sustain its two open production lines until a decision can be made. 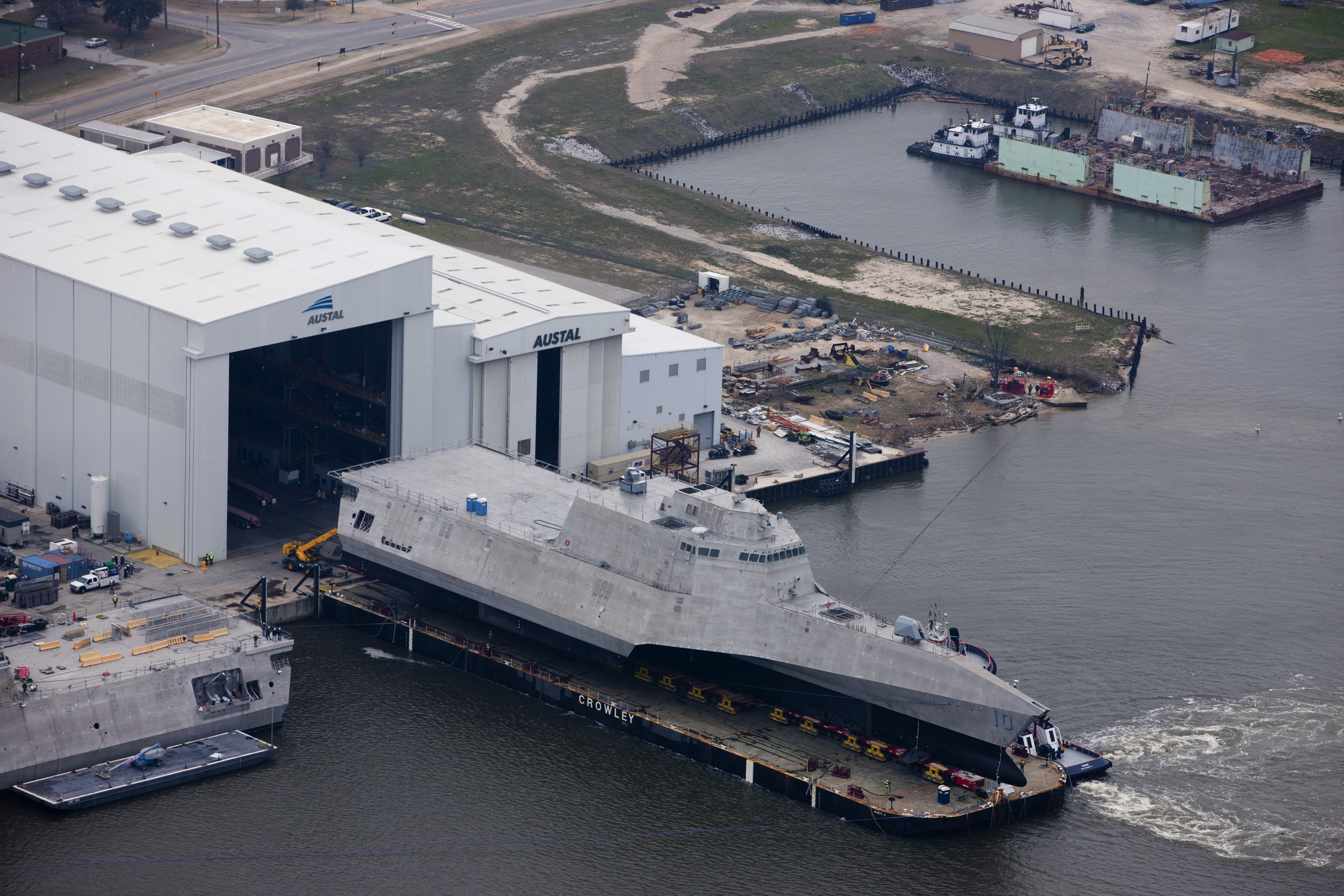 Neagley and Boxall testified together on May 3, about three weeks before the Defense Department submitted its FY 2018 budget request to lawmakers. The Pentagon’s budget submission only called for one LCS in 2018 and did not project out into future years, leaving the PEO and the two LCS variants’ supply chains in a precarious position, after Neagley made clear at the May 3 hearing that the Navy needed to buy at least three ships a year to keep the industrial base healthy.

The Trump Administration, through the Office of Management and Budget, told the Navy the day after the budget request was released that it was “supportive” of buying a second ship but still has not given any indication how that ship would be paid for – through a topline increase or in lieu of other spending items.

Asked about the impact to the industrial base, Stackley said in a May 24 hearing that buying fewer than three ships a year could be mitigated by managing the backlog at the shipyards in Wisconsin and Alabama.

Neagley, when asked how that might work and how well it would actually protect the shipyards and supply chains, simply said the Navy needed to buy at least three a year.

“About one and a half ships a year to each shipyard is really what is an efficient build cycle for us. So when you look at the manning levels in the shipyard, it’s a throughput, it’s like building a house. You have guys who do the foundation, and you have guys that’ll hang the drywall. So if you don’t have ships coming in for the guys who do the foundation, then those guys have to go find other work. So it’s not only the timing and the number of the ships but it’s the sequencing of work that provides the efficiency. The shipyards invested to do two ships a year on six-month centers, and so about one-and-a-half is an efficient build for me. Below that, we can certainly build ships, but I would expect to see impact to schedule and cost,” Neagley said.

Asked again how to help the shipyards stay open and viable for the frigate competition if fewer ships were bought in 2018, he said, “we certainly will continue to work with the shipbuilders on the sequence of ships. But again, if we go below that 1.5 (per yard per year) then we have to look at where they are in the current production cycle. There would be some impact to the efficiency of that yard. It’s both the sequence of work and the volume of work. The sequence of work, where you have particular trades that need ships coming in in the front end, you’d have to manage that workforce if that work doesn’t come in as per the schedule. So that’s what we’d have to manage with the shipbuilders.” 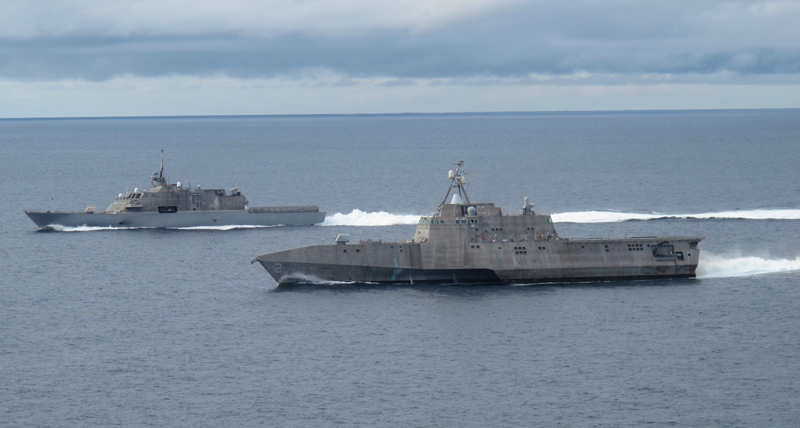 The Navy has bids in hand from Austal and Lockheed Martin for the three LCSs to be bought in the current year, FY 2017, and Neagley said those bids are being reviewed now. FY 2018 and 2019 ships will be handled in a different contract, which the admiral said would be competitive but the details of which are still largely undetermined, since it is unclear how many ships the service will buy in either of those two years.

“In a perfect world it would be great to know exactly how many ships, but given our history we’ve seen ships added, so it’s not new for us to have options in contracts as a way of handling additional ships if they were to come,” Neagley said.