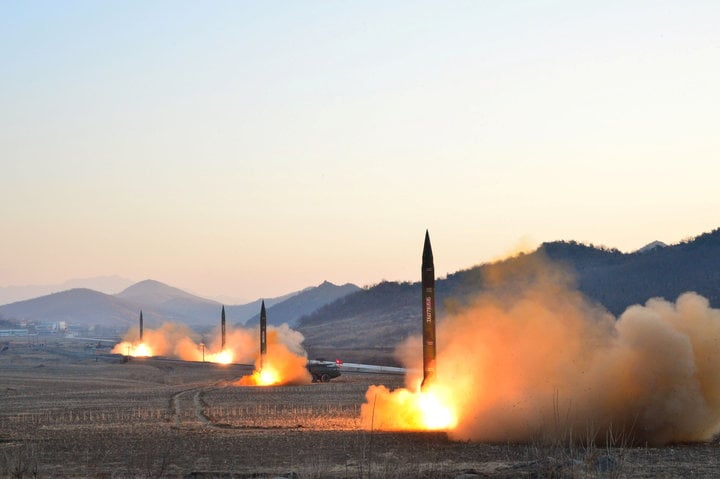 North Korean leader Kim Jong Un supervised a ballistic rocket-launching drill of Hwasong artillery units of the Strategic Force of the KPA on the spot in this undated photo released by North Korea’s Korean Central News Agency (KCNA) on March 7, 2017. via Reuters

North Korea will “in a matter of time” have an intercontinental ballistic missile capable of carrying a nuclear weapon capable of reaching the United States; but as matters stand now, American defenses would destroy it before it reached its target.

Speaking at the Center for Strategic and International Studies, a Washington, D.C. , think tank, Sen. Dan Sullivan, (R-Alaska), said that is not enough and is worrisome. “We see that train coming,” he said. One day, “Kim Jung-un can press a button and hit Chicago.”

The urgency for missile defense is compounded by Pyongyang’s history of selling its weapons expertise to other nations to raise money for its operations, he said in answer to an audience question.

In his Friday address, Sullivan said he and a number of Republican and Democratic senators will soon introduce a bill to step up missile defense spending. “You’ll see a lot of bipartisan support for missile defense” with the threat growing from North Korea and evolving threat from China and Russia with their advanced cruise missiles and hypervelocity weapons.

To the immediate point of deterring Pyongyang, he said the idea is to convince the North Koreans:

Sullivan noted that he and 29 other senators sent a letter to President Donald Trump warning the administration about North Korea’s continued testing after Pyongyang fired four missiles during a recently concluded South Korean-United States military exercise on the peninsula. In the letter they said the president needed to prod China’s President Xi Jin-ping during their Florida meeting to do more to rein in Pyongyang’s strategic weapons programs.

On Saturday, Trump and South Korea’s leader, acting President Hwang Kyo-Ahn, spoke by phone. The White House said the two agreed to stay in close contact about North Korea and other issues.

The U.S. Pacific Command directed the Carl Vinson carrier strike group to sail north to the western Pacific after departing Singapore on Saturday, according to a Navy news release. Vinson had participated in the recent exercises and was scheduled to head to Australia.

April 15 is the 105th birthday of North Korea’s founder Kim Il Sun and considered the biggest holiday of the year in Pyongyang. News reports from South Korea and Japan suggest a new nuclear weapons test is in the offing to mark that occasion and a further demonstration of Kim Jung-un’s determination to continue the missile and nuclear programs.

On Thursday, Air Force Gen. Lori Robinson, the top officer in U.S. Northern Command, told the Senate Armed Services Committee she was “extremely confident” in the nation’s layered defense in the case of Pyongyang, even as it has shifted from liquid to solid fuel propellant.

Sullivan said that shift in fuel means a missile “can be rolled out and fired in an instant,” rather than the hours or days it would take to load liquid fuel.

Air Force Gen. John Hyten, top officer of Strategic Command, told the committee earlier in the week the reason why Kim is testing his missiles and nuclear weapons so often is to speed the programs’ development. “North Korea is going fast, test, fail, test, fail, test succeed” and move on to the next step, he said.

In his address, Sullivan reminded the audience that Wernher Von Braun when he directed the American missile testing program failed 60 percent of the time. There is “a need to change the culture” around testing and “fear of failure.” Testing also keeps readiness levels high and demonstrates to potential adversaries the strength of the nation’s defenses, he added.

In her testimony, Robinson said what is needed for the future is an increase of ground-based interceptors, improved sensors, a redesigned kill vehicle and long-range discriminating radar, one site is operating at Clear Air Force Station, Alaska.

Sullivan, at CSIS, said “We must stay the course” with the ground-based interceptors and field the 100 originally intended to be stationed at Fort Greely, Alaska and make significant investments in the kill vehicle.

Robinson told the committee that now the discrimination radar that missile defense increasingly requires is terrestrial but will be more space-based in the future.

On the northern approaches to Canada and the United States and over the ocean to the east, “I want to do that at ranges to defend,” Robinson said, that comes from space-based sensors. Extended defense around the national capital region is in place.

All the steps mentioned by Hyten, Robinson and himself, “we can do simultaneously,” Sullivan said, and “we need to do all this with our allies.” In answer to an audience question, he added there should be no freeze in these programs being developed at the same time to allow technologies to mature. He compared it to being able to “walk and chew gum.”

But this entails turning around spending on missile defense. He said spending in the Missile Defense Agency dropped 25 percent in the decade from 2006 to 2016 and testing declined by 83.5 percent.