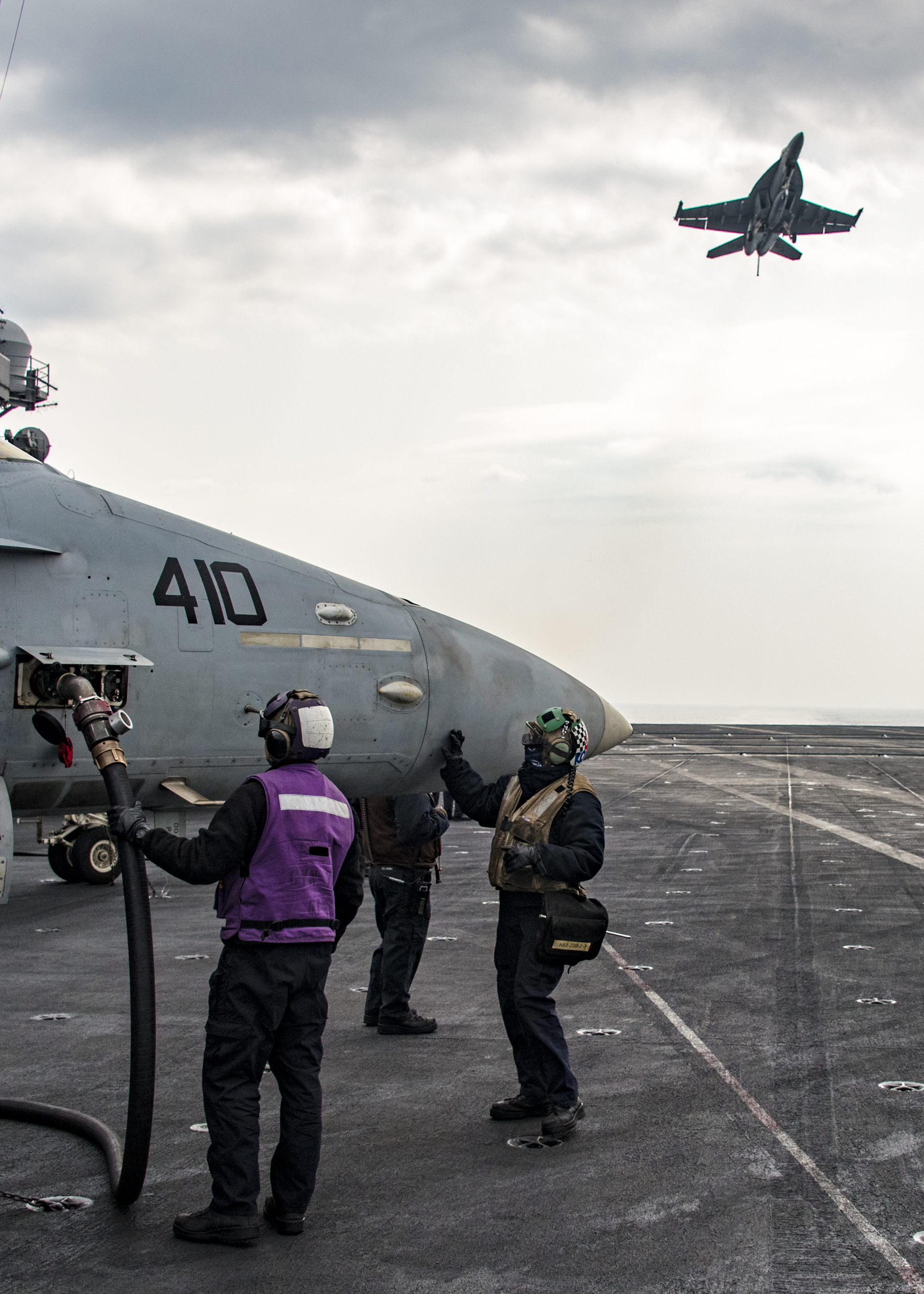 Navy and Marine Corps aviation leaders asked lawmakers to at the very least spare them from a full-year continuing resolution – and ideally to give them both the original Fiscal Year 2017 funding and the more recent FY 2017 supplemental funding the White House requested – to help dig out of a readiness hole.

On the operational side, air wings and squadrons will be shut down under a full-year CR, they told members of the House Armed Services tactical air and land forces subcommittee.

“The impacts of not getting a budget for me and the Marine Corps, in late July or early August we’ll start shutting down squadrons that aren’t next to deploy,” Deputy Commandant of the Marine Corps for Aviation Lt. Gen. Jon Davis said.
“And what that looks like – we talked about 20 TACAIR squadrons (total in the Marine Corps); six F-18 squadrons and four Harrier squadrons will basically cease flying operations, so half of our fleet.”

He said the pilots are already flying so few hours a month due to the Marines struggling to keep legacy airplanes – particularly the F-18 Hornet – ready and able to fly, and “stopping flying when they’re not flying now, I think that’s a debilitating gut shot to the nation’s force in readiness. That’s the last thing I want to see, and I think we need to do everything in our power to avoid that.”

“We are going to have to shut down squadrons as well, and shutting down air wings. So when you couple that with a readiness issue – i.e. squadrons that pilots, young [junior officers] that are in that maintenance or basic phase and they’re just not flying the hours that they were expecting to fly, and all the sudden now they’re in a squadron that’s potentially getting shut down – you couple that with airlines that are going to be hiring about 50,000 pilots over the next 10 years. And so we’re already starting to see the leading indicators of some retention problems, and that leading indicator is primarily bonus take rate. We’re already this year, at the O-4 ranks, abut 9 percent less than where we were last year. We’re concerned about this.”

The Navy previously said it would have to shut down as many as half its air wings if it was forced to operate under a full-year CR, and that it could start taking steps to slow or stop operations and maintenance spending as early as late April, when the current CR expires.

Program Executive Officer for Tactical Aircraft Rear Adm. Michael Moran said at the hearing that, under a full-year CR, “several new-start programs critical to delivering the next-generation of integrated capabilities will be delayed. Additionally, several current programs, some of which support joint urgent operational needs programs necessary to keep our air crews safe and effective on upcoming deployments, will be delayed as well. And others that provide critical sustainment efforts required to improve our flight line availability also will be impacted by a continuing resolution.”

All three officers said the Navy and Marines had in recent years neglected some of the aviation support accounts, such as engineering, spare parts and logistics.

“The aviation support account, for example, has been funded below requirement for the last eight years, which has forced programs to prioritize only safety-critical work, and projects such as reliability-centered maintenance, technical publications, structural repair manuals, things that improve the readiness on our flight lines, have not been done or supported,” Moran said.
“Investments in these accounts, which the Navy is focused on today, as well as long-term funding stability, is therefore essential” but would not be funded under a full-year CR.

Davis said the Marine Corps had readiness recovery plans for all of its legacy type/model/series, to try to build up the number of planes available to fly on any given day, but a CR would hurt the progress the Marines are already making. Last year the Marines added 44 aircraft to the flight line and is expected to add 33 this year, but “if we don’t get the money, if we have to stop flying, that’s going to start to taper off again. And the nation’s force in readiness will not hit its readiness targets until much later.”

Beyond avoiding a full-year CR, the officers made clear that they needed the supplemental funding they had requested earlier this month – about $30 billion for defense and homeland security spending, much of it focused on readiness.

“We’re funded at about 67 percent of our spares requirements in ’17. Some of that additional money in ’17 would go to get us up to the max executable amount of spare parts, certainly for the Marine Corps, 88 percent – as much money as I can spend in ’17 – to go get those spare parts,” he said.
“So if you look across the Marine Corps … it’s the number one readiness degrader outside of having old airplanes on the flight line, old unreliable airplanes.”

Davis said he couldn’t talk about the FY 2018 budget request yet but previewed that “I think you’ll see a very different profile from the United States Marine Corps as far as what we’re doing for our enabler accounts.”

On the Navy side, whereas enabler accounts had been funded at 50 or 60 percent in recent years, “what the request for additional appropriations does in this ’17 request, it really is focused on readiness and it funds those accounts to the 90 to 100 percent,” Miller said.

When the Navy doesn’t have the spares it needs, the deployed forces are given everything they need to operate successfully, but the “bench” forces – those that would go overseas if a major combat event or humanitarian disaster occurred – have their spares taken away to support deployed units, Miller said.

“That bench is where we measure the health of our readiness,” he added, noting that that bench readiness is not good today.

For the Marine Corps, the request asks for “$53 million for deployed operations, training exercises, and maintenance to mitigate reduced scope and scale and deferred maintenance and stock replenishment,” service spokeswoman 1st Lt. Danielle Phillips told USNI News. It also requests $229 million to address a shortfall in the FY 2017 Flying Hours Program, $132 million for spare parts for the F-35B and C and C-40 aircraft, and funding for critical installations reset and damage recovery efforts.