Iran is developing a submarine that could launch an anti-ship cruise missile designed to quickly sink an American warship operating in the Strait of Hormuz, according to a new assessment of Iranian naval capabilities published Wednesday by the U.S. Office of Naval Intelligence.

“In terms of armament, the Besat will likely have six torpedo tubes, capable of employing torpedoes and mines, as well as submarine-launched ASCMs,” reads the report.

While ONI did not identify a specific missile system for the Besat, the report’s conclusion said the capability would likely emerge in the Iranian fleet “over the next five years.”

Beyond a scattering of press reports, little is known about the 1,300-ton Besat program – part of Iran’s domestic shipbuilding effort for the regular Iranian Navy.

Iranian naval forces are split between the Islamic Republic of Iran Navy (IRIN) that is responsible for blue water operations and the Islamic Revolutionary Guard Corps Navy (IRGCN) that is charged with coastal defense of Iran and most operations in the Persian Gulf. 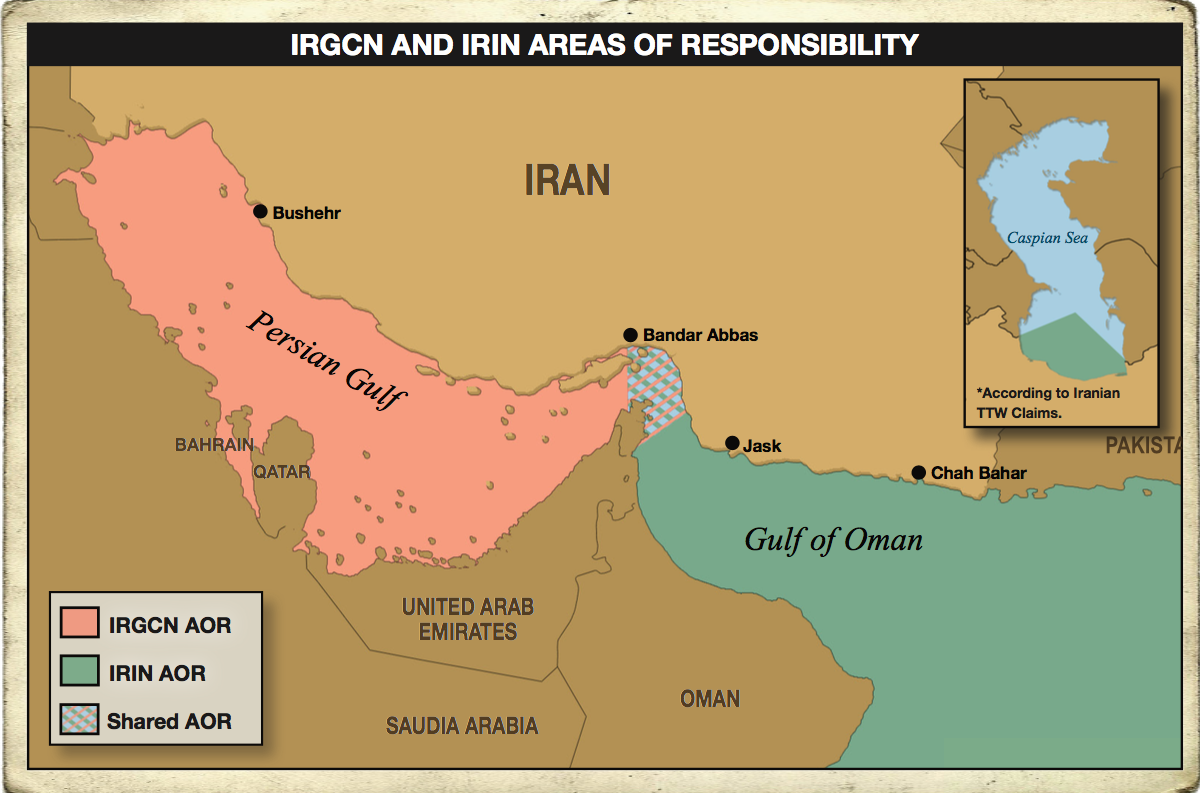 Both operate in the Strait of Hormuz and both count the U.S. Navy as their primary potential adversary.

The Iranian development of a submarine-launched anti-ship cruise missile would allow the IRIN a better chance of getting closer to a U.S. ship undetected than the IRCGN’s fleet of fast attack craft before firing a weapon, giving less time for the threatened ship to react to the attack.

For example, the Chinese YJ-18 sub-launched ASCM is a key worry for U.S. forces operating in the Western Pacific in the event of a full-blown war.

Naval analyst Chris Carlson told USNI News on Wednesday that the general description in the ONI report of the Besat attack boat is consistent with the early variants of the German export Type 209 family of conventional attack subs that can be modified to launch the U.S.-built UGM-64 Harpoon ASCM.

However, the considerable increase in size of this new submarine, twice that of the lone Fateh-class coastal submarine, plus incorporating a sub-launched ASCM, will present serious technological challenges for the Iranians. And while they have repeatedly expressed their desire for this capability, Carlson noted the Iranians are notorious for overstating their abilities.

“When the Iranian’s say they’re ‘building,’ take it with a grain of salt,” he said.

For example, the Iranians have spent years developing the much smaller and less complex 600-ton Fateh class submarines for costal defense.

More than three years after the submarine launched, “the IRIN has yet to declare the Fateh submarine operational,” read the ONI report.

Iran also fields three Russian-built Kilo-class submarines it received from Moscow in the 1990s but elected to modernize them domestically. Indications are that the IRIN did not include a cruise missile capability.

In addition to development of submarine-launched cruise missiles, the report indicated Iran was working to create an overlapping network of land-based anti-ship cruise missiles to put at risk ships operating in the Persian Gulf.

“The tight water space in the Strait of Hormuz, as well as vast miles of coastline, both provide optimal ring positions for coastal defense cruise missiles,” read the report.
“Iran has invested heavily in procurement, research, and production of multiple anti-ship missile systems over the past several years.”

Iran has developed a family of missiles – based on the Chinese C-802 ASCM (which was in turn based on the French Exocet ASCM) – that have ranges of up to 186 miles and cover the entire width of the Persian Gulf. 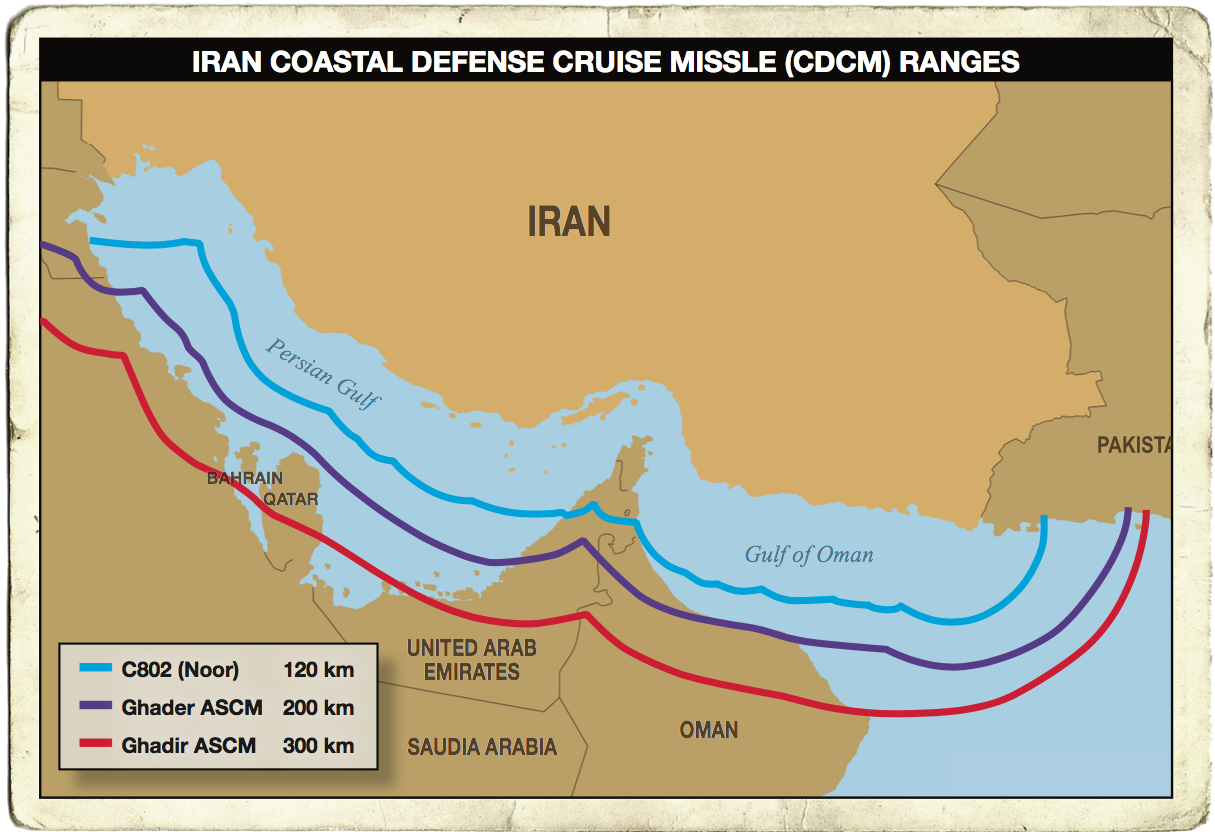 The missile development fits into Iran’s evolving strategy to take on a foreign force operating in the region, the report said.

“IRGCN commanders claim that in the event of a conflict, they will move swiftly to attack and destroy enemy warships present in the Persian Gulf and Strait of Hormuz. They believe that sinking several enemy warships in the early stages of a conflict would break the political will of an adversary to continue with a military campaign against Iran,” the report said.
“The doctrine manifests itself as hit-and-run style, surprise attacks, or the amassing of large numbers of unsophisticated weapons to overwhelm the enemies’ defenses. The amassing of naval forces is often described as a swarm of small boats.” 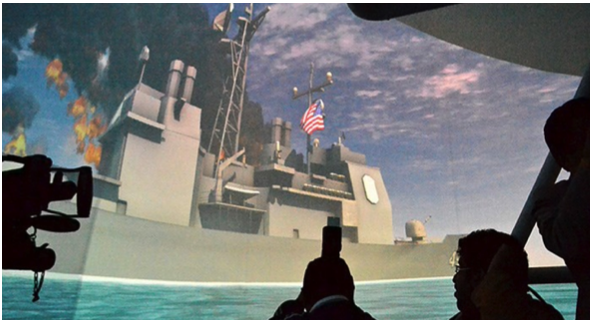 In 2015 – as part of its highly publicized Noble Profit exercise – the IRGCN destroyed a facsimile of a U.S. Navy Nimitz-class aircraft carrier as part of a less-than-subtle strategic message.

“Today, more than 100 of our vessels are conducting patrols daily in the Persian Gulf to the extent that the Americans see us wherever they look,” IRGCN commander Rear Adm. Ali Fadavi said in the Iranian press.
“We shouldn’t play nice with the Americans. If we were to do that, there would be no end in sight; we would be going from “A to Z.”