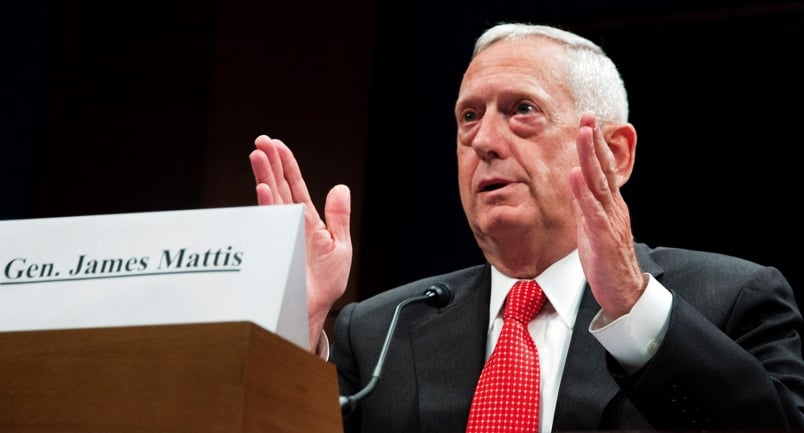 Two experienced national security experts told the Senate Armed Services Committee that a waiver of the seven-year requirement before a general officer could serve as Defense secretary would be appropriate in the case of retired Marine Gen. James Mattis, but stressed that this should be the exception not the rule in considering future nominees.

Eliot Cohen, a professor at the John Hopkins University School of Advanced and International Studies, went further in Tuesday’s hearing as to why the waiver was appropriate. Because of “my concerns about the incoming administration,” Mattis, former head of Central Command, would be “a stabilizing and moderating force” in the government.

In Cohen’s judgment, the retired Marine four-star would be a person capable of “preventing wildly stupid, dangerous or illegal things from happening” and praised Mattis’ judgment and disposition. Later when asked, he dismissed the nickname “Mad Dog Mattis” as wrong. He called him careful and prudent.

Kathleen Hicks, of the Center for Strategic and International Studies, added Mattis would provide experience to the incoming national security team that was put together with, “a seeming lack of attention to diplomatic skill.”

Chairman Sen. John McCain (R-Ariz.) said, “One can only hope” a President Donald Trump would listen to Mattis.

Cohen added in answer to a question he doubted that Mattis would comply with any administration directive to use torture in prisoner interrogations.

“There is a law against torture,” McCain said. All appointees’ “first obligation is to obey the law.”

Hicks, in her opening statement, said, “We should never take for granted civilian control of the military.” She added the Defense secretary is the only official, who is not elected, in the operational command structure of the Pentagon. “Civilians can bring value” to senior positions in the department because their perspectives differ from career officers. A waiver for Mattis should be considered “a generational” exception as it was when George Marshall was named secretary of defense.

“Civilian control is central” to the American experience “since colonial times.” In today’s world the secretary can be a bridge between the military and the public in understanding the United States’ role in the world, Cohen said.

“The public and elites are no longer having a dialogue” over the nation’s role in international affairs, she said.

Cohen later added that one way to close the gap between the military and civilian population would be to expand ROTC programs and also to re-look at areas of the country, like his native Massachusetts, that do not have a large military presence in future realignments.

“Our current circumstances warrant taking that step a second time,” referring to the waiver for Marshall in 1950, Cohen said. He and Hicks also cited Mattis’ writings on the civilian-military split as examples of how important he sees civilian control of the armed forces.

As to whether there would be a conflict between Marine Gen. Joseph Dunford, chairman of the Joint Chiefs of Staff, and Mattis because of his career over who is the principal adviser on military matters to the president, Hicks said knowing both men their sense of professional ethics made that unlikely. The chairman by statute is the president’s and secretary’s principal military adviser.

The advisor and staff “should not be seen as principals” in these areas and the staff should not be operational in implementing actions, he added.

As Sen. Tim Kaine, (D-Va.), was ending his questioning of the witnesses on the need for a new Authorization for the Use of Military Force to replace the one passed in the wake of the Sept. 11, 2001 terrorist attacks on the United States, McCain said he would call hearings on the subject this year.