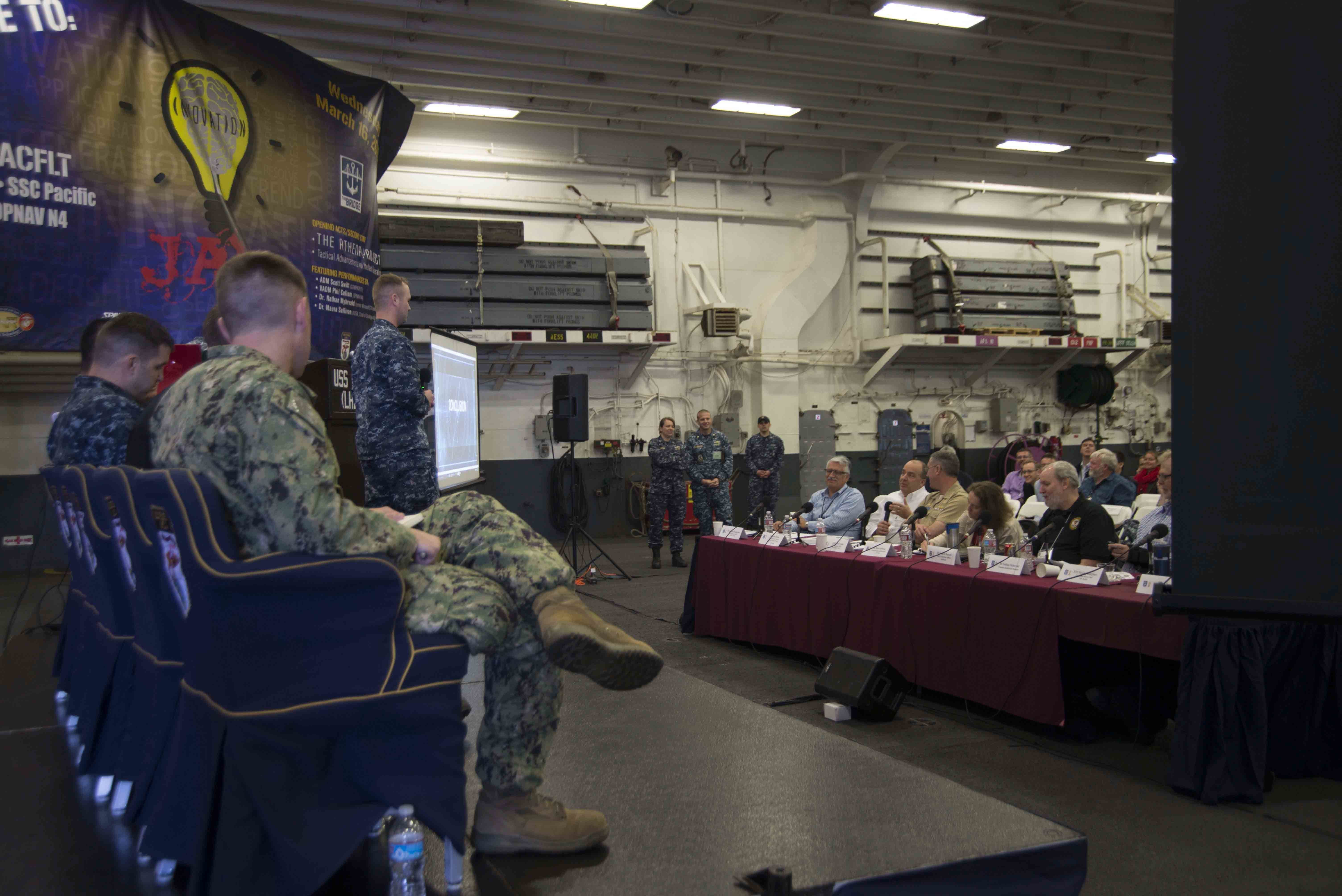 Lt. j.g. Rob McClenning answers questions from panel members about his new product pitch at the March 2016 Innovation Jam hosted aboard Wasp-class amphibious assault ship USS Essex (LHD 2). The Innovation Jam showcase pioneering concepts and rapid solutions to the fleet by SSC Pacific, the Athena Project, Tactical Advancements for the Next Generation and the Hatch. US Navy photo.

THE PENTAGON – The Navy continues to rely on its sailors at all levels for innovative ideas that will help the service operate better, faster, and for less money, the deputy under secretary of the Navy for management told USNI News.

The Department of the Navy is asking for submissions for the second annual Secretary of the Navy’s Innovation Awards, which recognizes and rewards individuals or teams that have created an innovation-friendly work environment or who have made achievements in specific areas, Thomas Hicks told USNI News in a Nov. 17 interview. Data analytics, automated process development and technology development are highlighted in this year’s awards contest, reflecting the needs of the Navy to counter increasingly technologically sophisticated potential adversaries.

“The data analytics is going to be, I think, a big piece; how we can better use data,” Hicks said.
“We can log a Library of Congress’ worth of data every day, so the key is, how can we turn that into useful actionable information, whether that’s for the business setting or operations?”

Last year the Navy received about 350 submissions for the 2015 innovation awards, he said, and “I’m hopeful that we’ll get more folks who put in for these awards and encourage us to think about new categories.”

The awards themselves are innovative in that they do not simply offer small cash prizes like many other awards programs. Instead, Hicks said, they reward innovative thinkers with whatever might help them improve their careers and in turn continue to improve the Navy around them.

“We had a chief petty officer who wanted to take a class, distance learning, from the Naval Postgraduate School, but it required a bachelor’s degree as a prerequisite,” Hicks said.
“Well we said, we can waive that because your background and experience in this field is good enough. And he’s doing great. We had a midshipman, first-class now but then second-class, who really was looking at the nuclear triad and had done some fascinating work. She’s going to be an aviator in the Navy and she has broader aspirations to eventually become an astronaut. So what she wanted to do was talk to an astronaut. We facilitated that, made that happen. She was able to do a tour and be able to sit down and talk to someone who had been in space a few times, and that’s what she wanted.”

One previous winner wanted to join the Naval Innovation Advisory Council as a prize for winning a 2015 innovation award, and that lieutenant will now have the opportunity to spend the next year focused on naval innovation, Hicks said.

Hicks said this awards program, along with ways to solicit the fleet’s ideas such as The Hatch online portal and the Shark Tank-like Athena Project, are meant to encourage innovation at all levels and in all communities of the Navy.

“You can’t force innovation, but what you can do is create an environment for it, and I think that’s what we’ve done,” he said. With potential adversaries increasing the size and quality of their militaries, “this has to be a key advantage for us, that we can outpace them, we can out-innovate them.”

Hicks noted the challenge of investing in innovation, where sometimes money will be spent on an idea that failed, or an idea that has to be shelved until technology matures a bit more. The Navy’s path to money for innovation runs through the Office of the Secretary of Defense and through Congress, Hicks said, and the Navy has to be able to explain why the funds are worth it.

“On the small-scale, pilot-scale things that we do, those are pretty easy to demonstrate a value to,” he said.
“As we look at the higher-priced things like rapid prototyping and fielding, that’s an area we need to communicate to those four (congressional) committees, for example, exactly what this does for us, because again our adversaries are innovating very rapidly and we can’t have the processes of the past that might have taken a decade or two decades to field a new innovative idea or technology or platform. We need to be able to do that much more quickly.”

Fiscally constrained budgets are not a reason to step back from experimenting and testing and prototyping, he added.

“Having constrained resources, the way out of that is innovation,” Hicks said.
“It’s not to say, well we can’t afford to do innovation; no, that actually is the case for innovation because we’ve got to figure out how we can do better, perhaps with less money.”