The Republic of Korea’s steady advances in robotics, autonomous systems and microelectronics could be the paths Washington and Seoul follow in future collaboration efforts in science and technology, research and development and systems production as the threat from North Korea grows.

Speaking Monday at a forum at the Center for Strategic and International Studies, a Washington, D.C., think-tank, Chang Myoung-jin, minister for Korea’s defense acquisition program said because of the threat from Pyongyang’s nuclear weapons program the United States and South Korea “must find ways to respond.” The threat includes nuclear weapons, land- and sea-based ballistic missiles, and a large manned and unmanned submarine fleet. He added, “Robotics can be used for defense” and Seoul is a leader in the field.

“Compared with the United States’ technology [in a wide variety of fields], we may not be at par yet,” but “we continue to forge ahead,” driven by large investments from the Korean government and its private sector.

In the past because there was such a gap in technological expertise, joint projects “were halted at mid-phase” before production could begin.

When asked about President-elect Donald Trump’s campaign pledge to have allies assume more of the burden in providing for their own defense, Chang acknowledged that in his personal view it “was a very sensitive political question.” If it happens though, Korea “will have to cut back on other budgets and that will cause resistance” in its domestic politics.

He said that $40 billion of Korea’s overall $400 billion budget is spent on defense. About $12 billion is spent on enhancing weapons systems, including buying 40 F-35s, developing its own KFX stealth fighter and a light fighter/trainer to counter North Korean advances in its weapons’ programs. 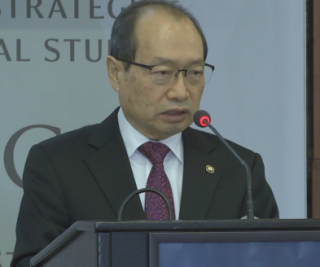 In answering a follow-up question, he said the continuing blocking of sales to Seoul of scanned radar; infrared search and rescue; electro-optical targeting pods; and radio frequency jammers hurt its aircraft modernization programs. “These are technologies we cannot get from other sources.”

Chang cited the Republic of Korea’s unique geographical position—sharing land borders with North Korea, China and Russia—as why it is important in U.S. international security strategy. “We play a key role” in the security of the Western Pacific. For example, “we monitor all those submarine activities” from the Russian base at Vladivostok.

He said in answer to another question a 2014 agreement between the United States Commerce Department and comparable ministry in Korea has made information-sharing on defense and security programs easier, more transparent and less susceptible to corruption on both sides.

Calling them “under the table contracts” between South Korean industry and supposedly capable U.S. suppliers led to reforms in how this business was being conducted by both sides. In one instance, the Koreans found that the sonar equipment they thought they were buying was being sold “by a paper company” that “couldn’t provide the equipment.”

“In Korea [at the time], we were unable to verify” the legitimacy and capability of the United States business with whom they were engaged.

“The same goes with Korea,” whose businesses can now be verified by American industry under the 2014 agreement.