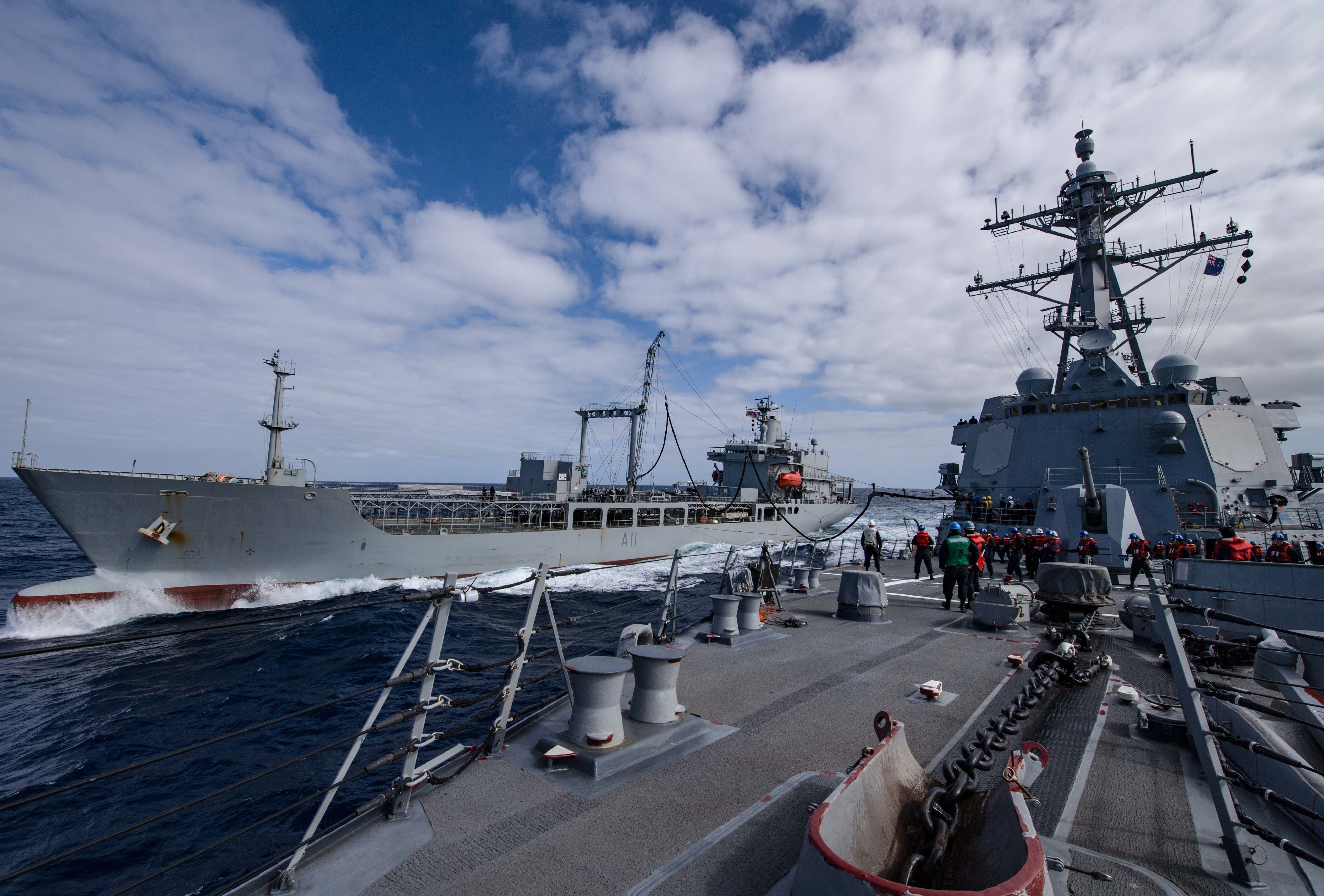 Arleigh Burke-class guided-missile destroyer USS Sampson (DDG 102), right, conducts a replenishment-at-sea with Her Majesty’s New Zealand Ship Endeavour (A11) on Nov. 13, 2016. Sampson will report to U.S. Third Fleet, headquartered in San Diego, while deployed to the Western Pacific as part of the U.S. Pacific Fleet-led initiative to extend the command and control functions of Third Fleet into the region.The destroyer’s stop at a New Zealand port would be the first for a U.S. warship in more than 30 years. US Navy photo.

The U.S. Navy is responding to a 7.5 magnitude earthquake off the coast of New Zealand, diverting a destroyer from a historic visit to New Zealand and instead evacuating local civilians and tourists and delivering humanitarian aid supplies.

New Zealand’s Defence Minister Gerry Brownlee said in a media statement today that the area around Kaikoura, a town on the northeast side of the South Island, “is completely isolated after the magnitude 7.5 earthquake and subsequent landslides.”

Providing supplies and evacuating tourists are the top priorities, he said, as damage assessments continue.

The New Zealand Defence Force mobilized four NH-90 helicopters, the first of which has already evacuated a dozen people this morning, and one P-3 Orion maritime surveillance aircraft.

A P-3 from Patrol Squadron (VP) 47 out of Marine Corps Base Hawaii has already begun flying surveillance missions around Kaikoura. The plane was already in New Zealand for Exercise Mahi Tangaroa, which falls under New Zealand’s International Naval Review being held this week. The turboprop patrol plane can conduct wide-area maritime search operations, which give the aircraft an advantage for search and rescue missions, according to a Navy news release.

“From the moment we got the word, our aircrew and maintenance professionals have thrown themselves into this relief effort with a commitment that is just so much a part of what our maritime patrol and reconnaissance force stands for,” Cmdr. Ryan C. Cech, commanding officer of VP 47, said in the U.S. Navy statement.
“I am proud we can assist our New Zealand partners in their time of need.”

The U.S. Navy also offered help from guided-missile destroyer USS Sampson (DDG-102), which was already in the Hauraki Gulf – on the northern end of the North Island of New Zealand – for the naval review. 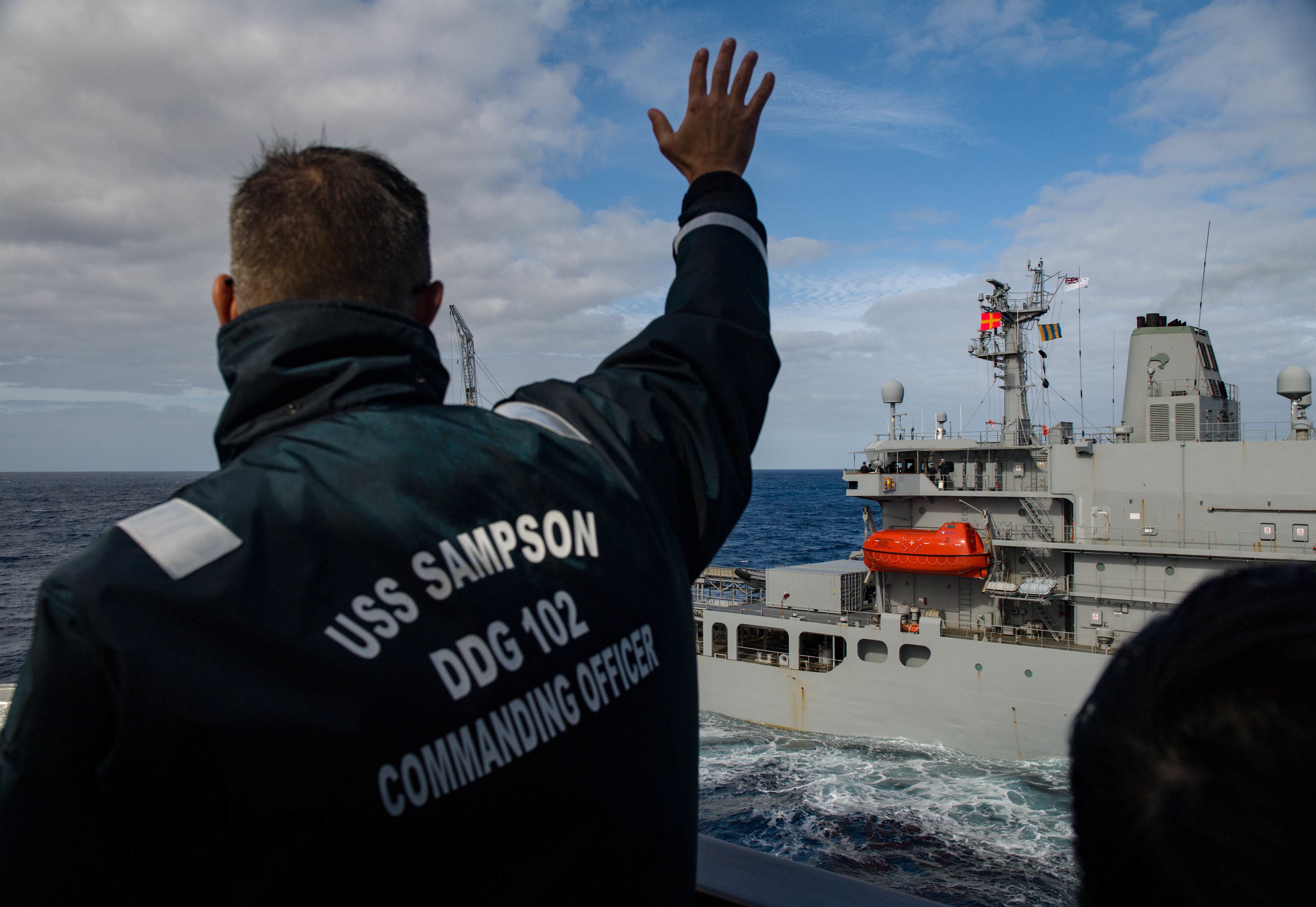 Cmdr. Timothy Labenz, commanding officer of Arleigh Burke-class guided-missile destroyer USS Sampson (DDG 102), hails Her Majesty’s New Zealand Ship Endeavour (A11) before a replenishment-at-sea on Nov. 13, 2016. Sampson’s visit to New Zealand is the first for a U.S. warship in more than 30 years. US Navy photo.

Sampson’s ability to quickly respond to the disaster relief mission is noteworthy – Sampson’s visit to New Zealand is the first for a U.S. warship in more than 30 years, after New Zealand banned nuclear warships and the U.S. Navy then decided not to send any of its ships there due to a policy of not stating whether a platform did or did not carry nuclear weapons. The two navies have continued to work closely together in bilateral and multilateral exercises, many of them focused on the type of humanitarian assistance/disaster relief (HA/DR) mission Sampson will perform. Breaking that stalemate on port visits, the two navies had agreed Sampson would participate in the naval review to commemorate the Royal New Zealand Navy’s 75th anniversary. Instead of joining in the pageantry, the destroyer found itself involved in a real operational mission.

The Royal New Zealand Navy has an offshore patrol vessel, HMNZS Wellington, that is making its way to Kaikoura to determine whether the HMNZS Canterbury (L421) multi-role sealift vessel could pull into the town’s dock or would have to anchor offshore. Canterbury has landing craft that could bring food, water and supplies ashore if the ship cannot directly reach the port.

Brownlee said in his statement that he hoped to evacuate about 140 people on a priority list, which includes stranded tourists, today, as well as begin to clear inland routes to reach affected towns further south.