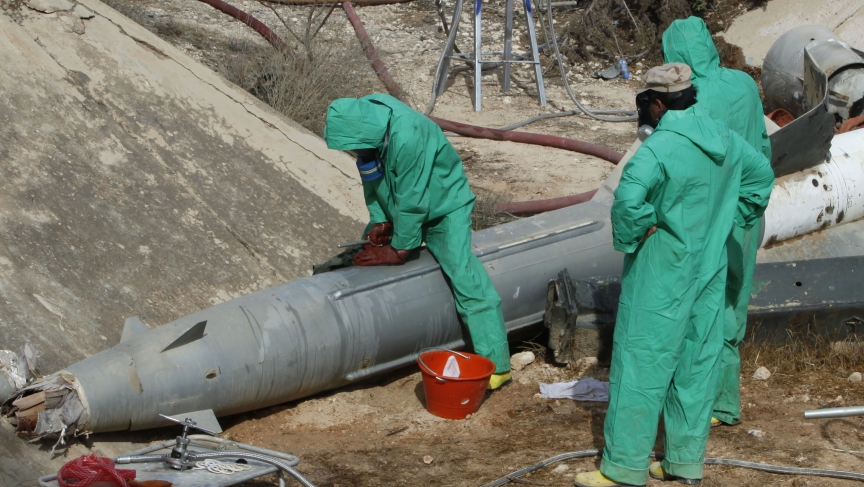 The key difference between Libya and Syria in the removal of chemical weapons and their precursors from their countries was the trust, transparency and openness that Libyans showed—from removal to transport to destruction.

Mallory Stewart, deputy assistant secretary of State for emerging security challenges and defense policy, said Thursday, “[Libya] went out of its way to keep the international community informed” of where the heavy industrial chemicals that could be transformed into weapons were, the security around the stockpile and details of its movement from a desert storage site to the port for eventual shipment to Germany.

“Libya showed what good behavior could be,” he said.

In contrast, Syria, like Libya “a country in turmoil,” “does not answer questions,” she told a forum at the Center for Strategic and International Studies, a Washington, D.C., think-tank.

Simon Limage, deputy assistant secretary of State for nonproliferation programs, said the central question for the United States, when the Libyans approached the Organization for the Prohibition of Chemical Weapons [OPCW] in the Hague in December 2015. came down to: “Who were we dealing with?”

Libya has been racked by civil war and the rise of militant extremist militias controlling different sectors of the country since the overthrow of Muammar Gadhafi in 2011. Gadhafi in 2004 began a program to rid Libya of weapons of mass destruction, in part a response to the United States’ invasion of Iraq.

“We wanted to keep eyes on” from start to finish, Limage said, even with a minimal physical presence on the ground. “The political context [of the operation] was completely different,” he said. Syria was bowing to international pressure to remove the weapons after they were used on civilians in its civil war, and Libya’s government and different factions inside its borders wanted the stockpile destroyed.

Deepti Choubey, head of the public affairs branch for OPCW, which is not a U.N. agency, said another complication was that the Libyans believed that they could simply request assistance in the removal and destruction of the weapons—as had happened in Syria—and it would occur.

But the treaty, signed by more than 190 countries, bans the export of those weapons. Taking the weapons out of Libya even for destruction would constitute export. It had to grant an exception. The organization also operates under a principle that past action is not precedent. Maneuvering through the organization itself, as well as gaining a U.N. Security Council resolution to destroy the Libyan chemicals and drawing together an international effort, was done comparatively quickly, she said.

“This was not an incremental win. It was a big win” in keeping the chemicals out of the hands of terrorists. “They will never be made into chemical weapons,” such as mustard gas, sarin or nerve agents.

As it did with the Syrian mission, Denmark stepped forward to ship the material out of Libya. Jonas Parello-Plesner, head of the foreign and security policy team at the Danish embassy in Washington, said because there was a military element to the effort parliamentary approval was needed and granted.

By having to go to the Parliament, the Danes and other nations faced a serious challenge “in when to go public” and possibly compromise operational security. There was “a degree of urgency” to complete the mission as quickly and secretly as possible to keep terrorists, such as the Islamic State which is operating in Libya, in the dark about security around the desert storage site, how and when the chemicals were being moved, security at the port and surrounding the ship arriving in port and loading the material.

The main reason the Danes took on the mission, said Parello-Plesner: “We’re a small country but committed to global governance.”

As it had in the Syrian operation in the late spring and early summer of 2014, Germany agreed to be the site where the chemicals were destroyed. Christoph Israng, Berlin’s permanent representative to the organization, said because his nation is a federal republic, permission had to be secured to transport the chemicals across the various states to the destruction site.

Limage said the State Department worked closely with the authorizers and appropriators on Capitol Hill to keep them informed of what the United States was doing in this international effort.

Although the process was the same for Germany in moving and destroying the chemical as it had been for Syria, “every case will be different” in conditions and how to proceed. Israng added, “The Libyans really wanted to get rid of their chemical weapons,” and their African neighbors agreed with that decision.