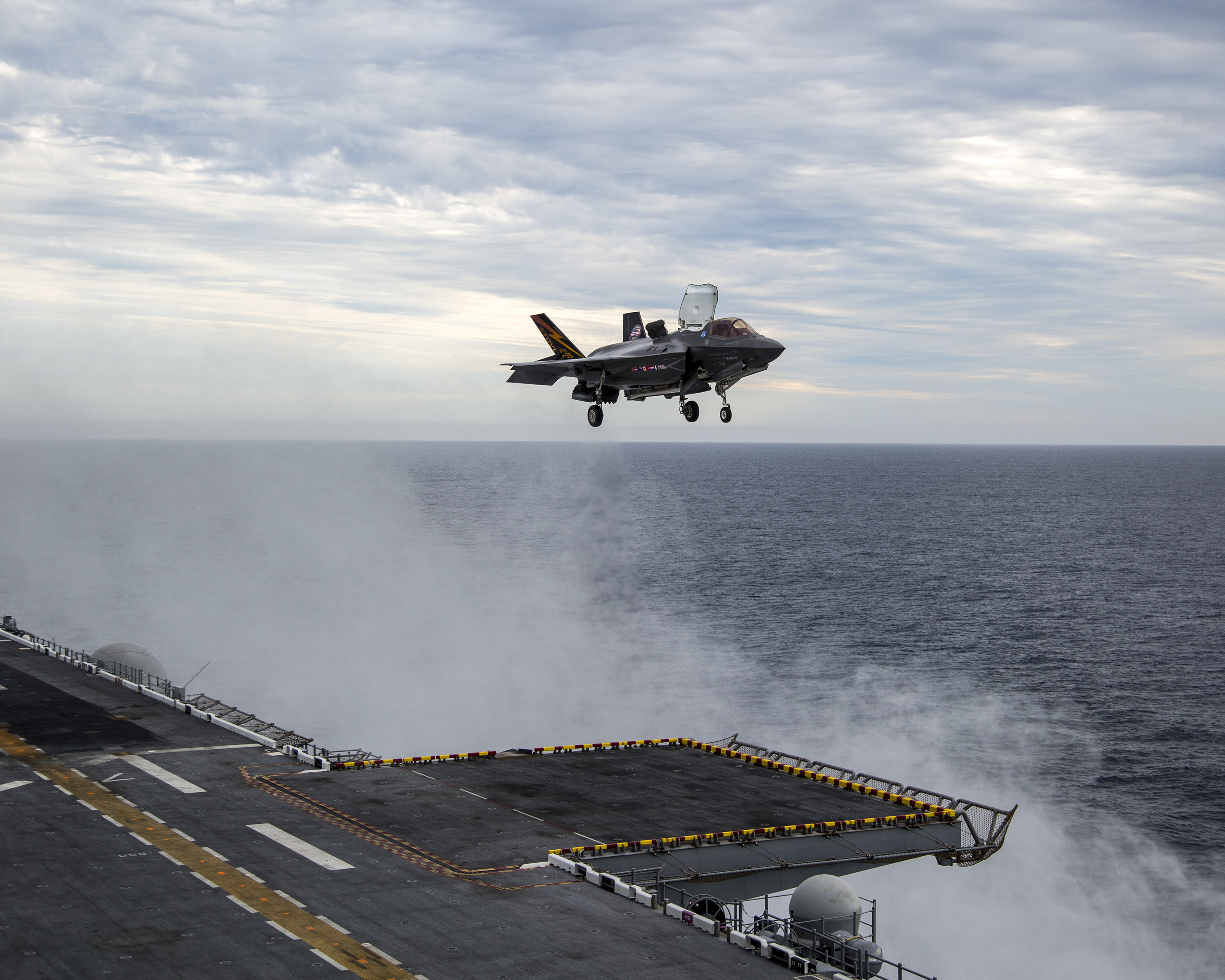 ABOARD USS AMERICA, OFF THE COAST OF CALIFORNIA – After years of testing to make sure the F-35B Joint Strike Fighter and its subsystems work as designed, the Marine Corps has a contingent of pilots and maintainers aboard USS America (LHA-6) now to ensure the new plane can operate from the amphibious ship, in a final test period ahead of next year’s first deployment.

This effort to build at-sea experience and gather lessons learned is being conducted in conjunction with the final developmental test event meant to ensure the plane can operate in the most extreme at-sea conditions, with a range of weapons loadouts and with the newest software variant.

With the F-35Bs deploying in a Marine Expeditionary Unit float in just over a year, a lead operational tester said the Marine Corps and Navy need to gain as much knowledge and experience as possible during this last official test period.

“We’re building up an experience level across the fleet, taking a lot of Marines that have never been on ships before, taking a lot of Navy personnel that have never interacted with the F-35 and putting out a representative number of aircraft for what a deployment would look like in the future,” Lt. Col. Richard Rusnok, Marine Operational Test & Evaluation Squadron 1 (VMX-1) detachment officer in charge, told reporters on Oct. 31 aboard amphibious assault ship America. 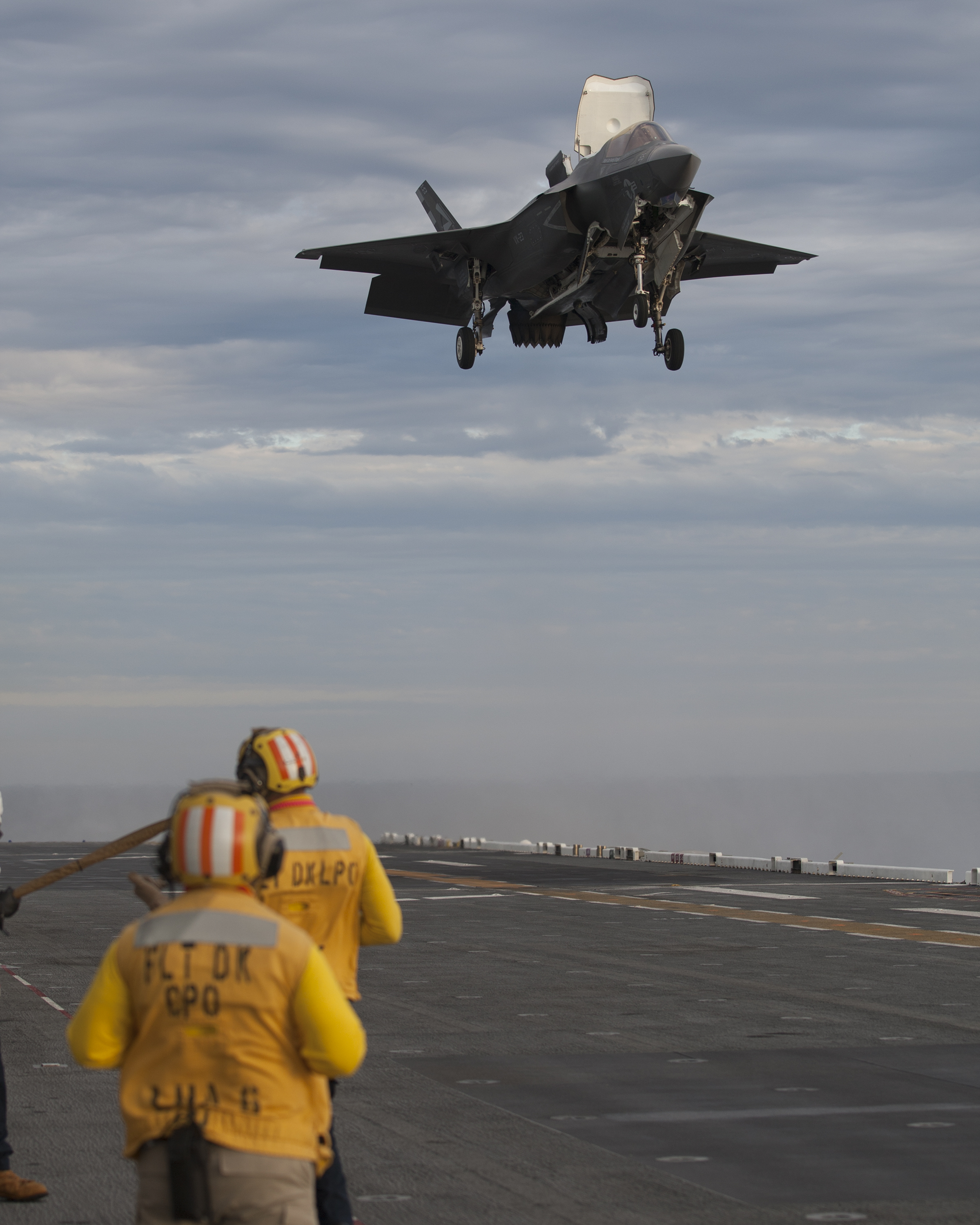 Marine Fighter Attack Squadron 121 (VMFA-121), the first F-35B squadron that achieved initial operational capability in July 2015, will deploy to Marine Corps Air Station Iwakuni in January 2017 and deploy aboard USS Wasp (LHD-1) around February 2018. The second operational squadron, VMFA-211, is set to deploy on America in 2018 as well.

“It’s coming at us like a freight train, so we’re looking at all these opportunities to increase the level of experience among all of the folks that are going to touch the airplane, operate with the aircraft, and we’re going to explore some interoperability issues across the whole spectrum,” Rusnok said.

To that end, he said, the service tried to include as much of the F-35B community in this test event as possible.

From his perspective, Rusnok said one of the most important aspects of F-35B operations the testers needed to stress during the test event is at-sea maintenance. He said VMX-1 brought an additional plane solely for the purpose of intentionally breaking it in different ways and making sure the maintainers had the space and equipment they needed aboard America to get the plane back up and running. Rusnok said intermediate-level engine maintenance was a particular focus – America was designed to support the larger F-35B and MV-22 Ospreys and has enhanced aviation support facilities, and the F-35B maintainers are finally getting a chance to work within that space and provide feedback to the ship’s crew on what changes could optimize their work flow. 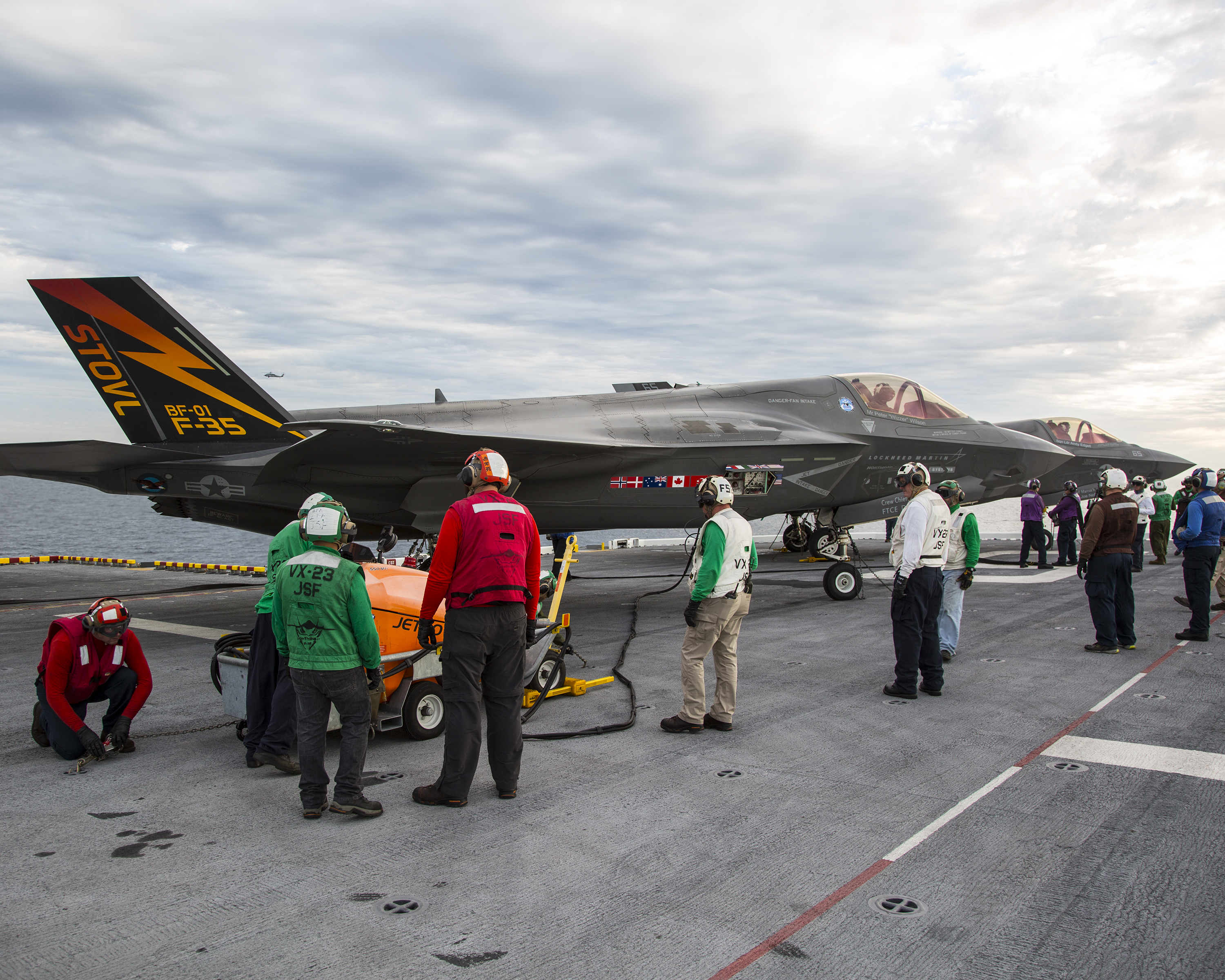 Rusnok said the F-35 personnel were also working with the ship’s crew to improve flight deck operations. He said the operational testers and the ship’s Landing Signal Officers, who talk to pilots during their approach to the ship and help them land safely, met earlier that day to discuss new procedures, which will be incorporated into Navy and Marine Corps publications and spread through the fleet to inform future operations.

The operational tester added that the entire test event will be more productive due to the collaboration with the developmental testers, who usually have separate test dates and keep their test data and lessons learned separate.

“I would think the biggest thing we’re getting out of this right now is our first opportunity to do integrated test amongst [Patuxent] River [Integrated Test Force] and VMX,” Rusnok said.
“In the past, operational test and developmental test had this gigantic wall between them; developmental test got done, it got tossed over the wall and then this widget showed up and we had to test it. That is a stupid way to do business and I think we all realize it. So the synergistic effects of sharing resources, number one, because there’s obviously a limited amount of resources, and the ability for us to look at what those guys are looking at. So for example, one of our aircraft we brought out here, which we own from VMX-1, has now got the same software version that one of their aircraft had, and we were able to get an early version of that so we could take a look at it and then also provide that asset for them to conduct developmental test on. So it makes everybody more efficient when you have a very limited window of three weeks at sea to get stuff done.”

The developmental testers are using the 3F software that brings the plane to full warfighting capability, with full weapons and data link imagery capability. VMX-1 upgraded one of its planes to that 3F software version; two of its planes have the 3I software variant that included an upgraded integrated core processor, and two have the 2B software that the Marines declared IOC with, with initial warfighting capability and a more limited set of weapons.

Whereas the operational testers are working to ensure tactics, techniques and procedures actually work while operating F-35B aboard a ship, the developmental testers are pushing the airframe in extreme ways to make sure it can handle whatever the fleet may need it to do.

Andrew Maack, the chief test engineer at Patuxent River ITF, said aboard the ship that developmental testers would look at some ship-integration issues, such as how the shape and location of the island on America – which has a different design than Wasp, which hosted previous tests – would affect the plane’s ability to land. The primary focus, though, was finding rough seas to make sure the plane could land with increased deck motion in up to sea state 5, and launching the plane with a heavy weapons load-out and returning to land with a much lighter gross weight.

The DT III test event built upon DT I in October 2011 and DT II in August 2013. In this final event, Maack said the developmental testers would push the operating envelop in terms of wind and deck motion, evaluate landing systems and mission systems, ensure shipboard maintenance and logistics work as planned, evaluate the Autonomic Logistics Information System (ALIS), conduct the first complete at-sea evaluation of the Joint Precision Approach and Landing System (JPALS) and more.

Maj. Rob Guyette, a developmental tester with Air Test and Evaluation Squadron 23 (VX-23), who has more than 200 hours of flight time in the F-35 but made his first night landing on a ship the night before speaking with reporters, said the F-35 was “easier to fly than a Cessna 172” and that Marines should be excited about the future of MEU aviation operations.

“Last night was dark, it was real dark – it was one-percent illumination, overcast, no moon, rainy, in and out of rain. And it was my first time ever landing vertically on a ship at night, and it was fun,” he said.
“I mean, to be honest with you, it was fun. And we’re sitting there and we were like, that is amazing that the airplane – okay, there’s things that as testers where like, this could be better, this could be better, this could be better – that’s our job, we’re hyper-critical of everything – our wives love it, by the way – but we’re always trying to make it better. But the thing is, the bottom line, Marines love to fight. We want to practice fighting – if we can’t fight, we want to practice fighting. What we don’t want to practice, what we don’t want to spend time and money or maintenance hours on is practicing how to land. … This airplane allows us to do that, completely focus on the mission, completely take the whole landing and administrative difficulty out of it.”