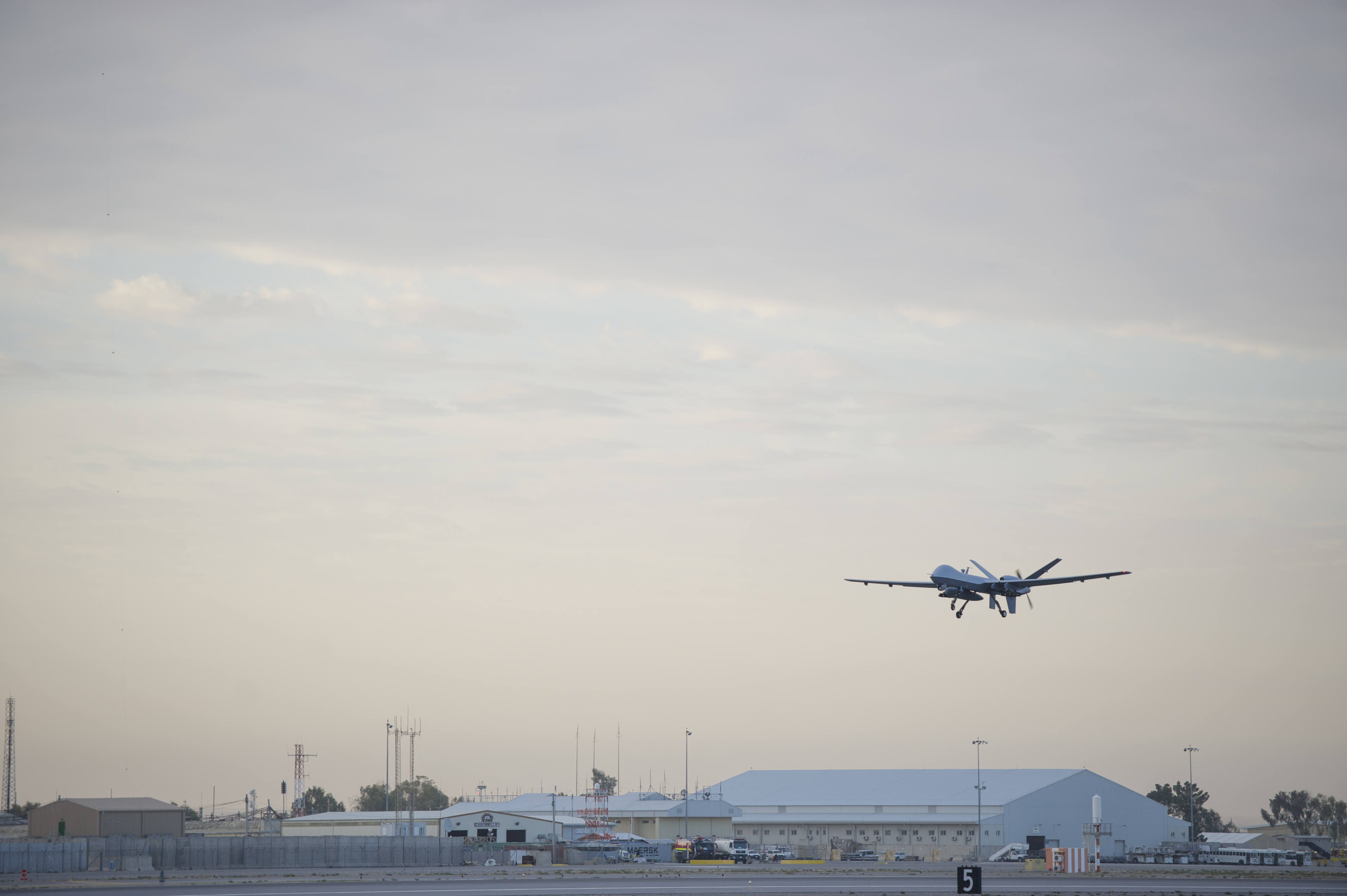 The Marine Corps is in the early phases of developing a large Group 5 unmanned aerial system (UAS) that would operate from a ship and provide long-range, long-endurance capabilities for not only the Marine Air-Ground Task Force (MAGTF) but also potentially the Navy’s fleet and Army ground forces.

The Marines’ initial capabilities document for the MAGTF UAS Expeditionary (MUX) program was approved this month by the Joint Requirements Oversight Council (JROC). The document merged what had been two separate Group 5 UAS requirements that the Marine Corps ultimately determined could be fulfilled with a single air system, Lt. Col. Noah Spataro, the Unmanned Aircraft Systems Capabilities Integration and Requirements Officer under the Deputy Commandant for Combat Development and Integration, told USNI News last week. Group 5 UAS typically fly at medium- to high-altitude ranges and can weigh above 1,300 pounds – and are therefore the most complex to launch and recover.

Spataro said much is still not known about this UAS – a notional schedule doesn’t show the service completing an analysis of alternatives (AoA) to select a material solution until late 2018 – but he has some ideas about what this UAS will have to do.

First and foremost, he said, it will be runway-independent. Likely a rotary-wing or tilt-rotor aircraft, the air vehicle will have to take off from and land on Navy ships and should be able to land at ground facilities to refuel and rearm. He said the Army is buying enough MQ-1C Gray Eagle UAVs to field one for each division, but that then ties the division to a runway.

The Office of Naval Research and DARPA are collaborating on the Tern project to give forward-deployed small ships the ability to serve as mobile launch and recovery sites for medium-altitude, long-endurance unmanned aerial systems that would provide ISR and other capabilities. DARPA rendering.

Spataro said there are several efforts going on now to develop technologies that could support MUX – for example, the LightingStrike aircraft participating in Defense Advanced Research Projects Agency (DARPA)’s Vertical Take-Off and Landing Experimental Aircraft program can take off vertically but also has wheels to support a rolling take-off that allows the aircraft to carry heavier payloads.

When the time comes to begin the AoA, all manner of commercial and defense products in varying levels of maturity will be considered, though Spataro said it was unlikely that any single product would meet their needs and instead the service would have to go through the full design and development process.

“Our analysis of alternatives will look at all the possibilities that are out there, all the existing capabilities – things like modified commercial airplanes to MQ-1s, MQ-9s, and developmental things like the Tern program, the ARES program, I mentioned the LightningStrike,” he said.
“And then some other constructs that industry has approached us on, like the Bell V-247, which is kind of an offshoot of the V-280. So we’re looking at a lot of options to try to see what makes the most sense. So looking at the gaps is one part of that, and looking at the fiscal sense – ideally, if it’s a full developmental program, which is probably what it would have to be to get vertical takeoff and land, because that just doesn’t exist right now, then we’re going to want to partner, ideally.”

The Marine Corps has not signed any agreements with the other services, but Spataro said the Navy and Army are watching closely.

The MAGTF UAS Expeditionary program may be more about integrating existing technologies than creating new ones. Spataro said technologies exist to support payloads for all seven mission sets, as well as technology to pass control of missions among multiple operators. For example, the Marines experimented with an MQ-9 Reaper this summer at the MAGTF Integrated Experiment 2016 (MIX 16), with the Reaper providing communications relay, intelligence and fires as needed. When it came time for the UAV to fire, the comms and intelligence equipment weren’t turned off, but rather control of those sensors was passed to other personnel while the vehicle’s primary operators focused on the fires mission. Once all targets were engaged, the primary operators resumed control of the comms and intelligence mission. This capability already exists for larger UAVs like the Group 5 Reaper and smaller ones like the Marines’ Group 3 RQ-7B Shadow — and Spataro said this essentially happens on manned platforms as well. He suggested that the MUX may be outfitted to perform some missions like C4, RISTA and electronic warfare at all times and other missions only as needed.

Another key integration challenge will be connecting this UAS to the rest of the Marines’ and Navy’s architecture.

“I think the hardest part is going to be how do you integrate that into the [Marine Expeditionary United] and Amphibious Ready Group and Marine Expeditionary Brigade,” he said.
“How do you do that within distributed operations, and how do you do that in concert with the Navy in its distributed lethality concept and [Naval Integrated Fire Control-Counter Air], where the Navy’s going?”

The Navy tie could be important. The Office of Naval Research and DARPA are working together on the Tern program to develop a UAV that could operate off a destroyer or frigate and improve situational awareness. Spataro said the Navy’s surface warfare directorate (OPNAV N96) spoke to the Marines about MUX, noting the benefits of the UAV if it could tap into NIFC-CA while flying off an amphibious ship or other Navy surface ship.

The Bell V-247 tiltrotor is an unmanned aerial system (UAS) that will combine the vertical lift capability of a helicopter with the speed and range of a conventional fixed-wing aircraft, and would provide long-endurance persistent expeditionary and surveillance and fires capabilities. Bell rendering.

MUX has a lengthy timeline ahead of it – notionally it would finish its AoA in 2018, evaluate prototypes and representative systems leveraging DARPA and other products through 2021, work through the engineering and manufacturing development phase through early 2027 and reach initial operational capability in 2029. Success in any of the DARPA, ONR or industry initiatives could shorten that acquisition timeline, the notional schedule notes.

Spataro said the Marine Corps intended on experimenting with using Group 5 UAS to learn as much as it could as early as possible, in the hopes of speeding up development and fielding. Using the Reaper at MIX 16 was a good start, he said, but the Marine Corps Warfighting Laboratory would continue to seek opportunities to insert UAS experimentation into other tests and exercises.

“MIX definitely reinforced not just the requirement but the capability gap, and what it really enforced for me and many other folks who are near the problem is that there’s a lot we just don’t know, and further experimentation is needed just to inform how we understand the gaps, how we integrate within the MAGTF and the naval force to go after these gaps, and once we get through the AoA and really start nugging down and writing the requirement, what are the very specific things that we need to accomplish in order to go after the gap?” he said.
“Right now we don’t have Group 5 UAS experience, we don’t have this kind of integrated communication and sensing architecture. Aviation has been talking about for a while every platform a sensor and a shooter, so all these things go very closely hand in hand, but we have a lot to learn. And that’s where experimentation comes in.”