As the Navy and Marine Corps work through a high-end warfighting exercise in the Pacific, which features a traditional three-ship amphibious ready group (ARG) operating with a guided-missile destroyer as a peek into future operations, a similar ship pairing is performing real-world missions in the Mediterranean today.

As part of the exercise, the Bonhomme Richard Expeditionary Strike Group (ESG 7) conducts traditional amphibious missions while “guided-missile destroyer USS Curtis Wilbur (DDG-54) will be assigned to the ESG to increase the strike group’s capabilities to conduct a range of surface, subsurface and air defense missions, to include naval gunfire support,” according to a Navy news release on the exercise.
“With increased capabilities beyond a traditional amphibious ready group, ESG 7 can rapidly integrate cruiser-destroyer assets in order to quickly and effectively react to any contingency that may occur, including responses to natural disaster or crises in the region.”

This departure from normal ship groupings – amphibious ships together in an ARG and surface combatants supporting the aircraft carrier in a carrier strike group – doesn’t just hint at how the Navy would handle combat operations in the future. It is also playing out in the Mediterranean today.

The amphibious assault ship USS Wasp (LHD-1) has not sailed with the rest of its ARG since late July. Instead, it has been paired with destroyer USS Carney (DDG-64) to conduct strikes on Islamic State targets in Sirte, Libya, as part of Operation Odyssey Lightning. 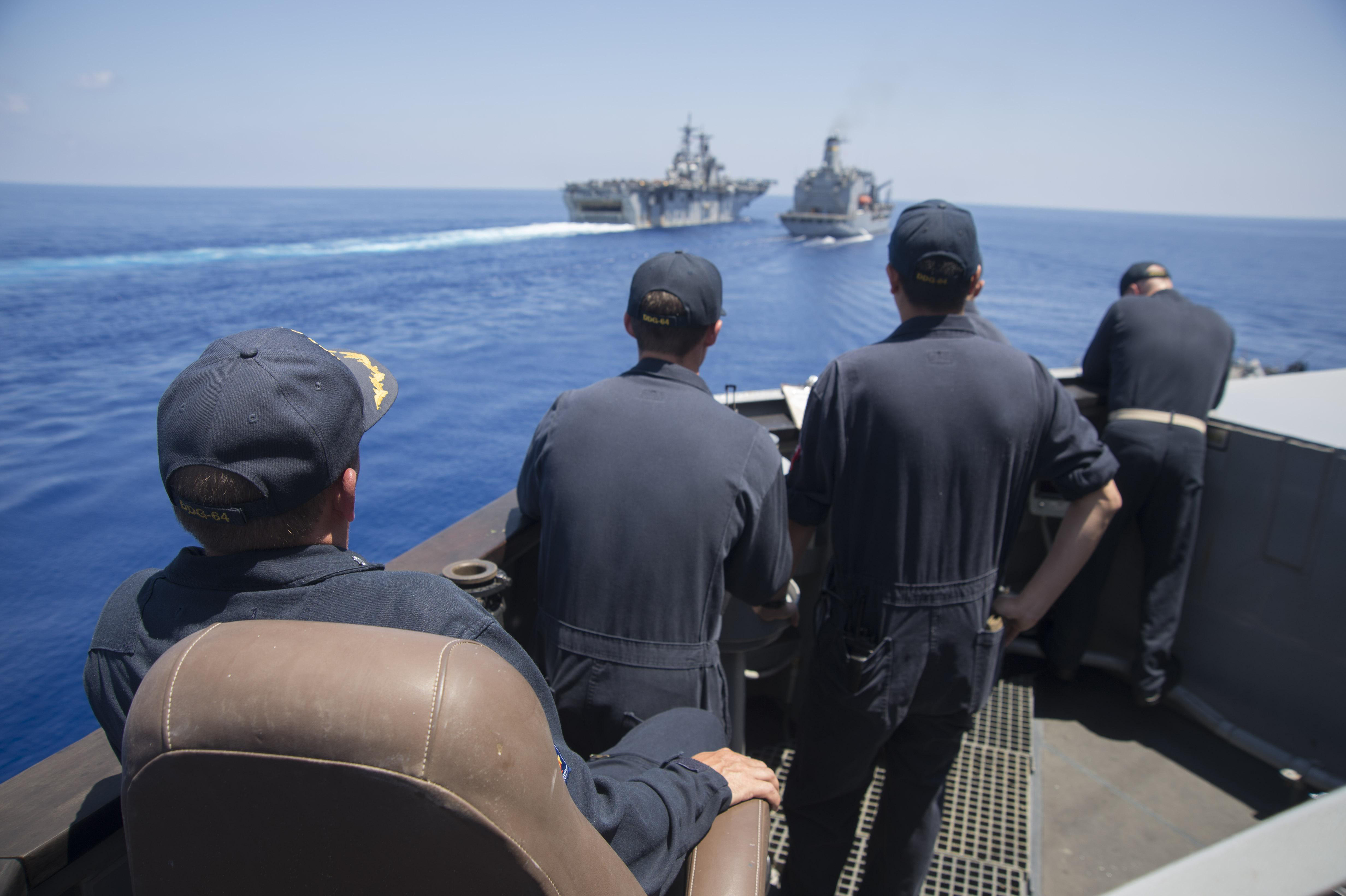 U.S. Africa Command spokeswoman Robyn Mack told USNI News that “the USS Wasp with the 22nd Marine Expeditionary Unit embarked, and the USS Carney, which replaced the USS The Sullivans, have been supporting U.S. precision airstrikes at the request of [Libya’s Government of National Accord] since Aug. 1. As such, Harriers and Cobras assigned to the USS Wasp have been used to conduct strikes, with the USS Carney providing over watch support.”

A Navy official told USNI News that while AV-8B Harriers from 22nd MEU aboard Wasp have dropped ordnance on these Libyan targets, Carney shot illumination rounds in what is called “disturbance of routine operations.” These shots are fired from the destroyer’s MK 45 5-inch lightweight gun and could not be shot from the amphibious transport dock (LPD) or dock landing ship (LSD) that would typically accompany the big-deck amphib.

Though Mack could not elaborate on the Wasp/Carney pairing due to operational security concerns, Navy photos and news releases show that having Carney support Wasp in U.S. 6th Fleet for these past two months has freed up the rest of the ARG – USS San Antonio (LPD-17) and USS Whidbey Island (LSD-41) – to conduct missions throughout the U.S. 5th Fleet area of operations. 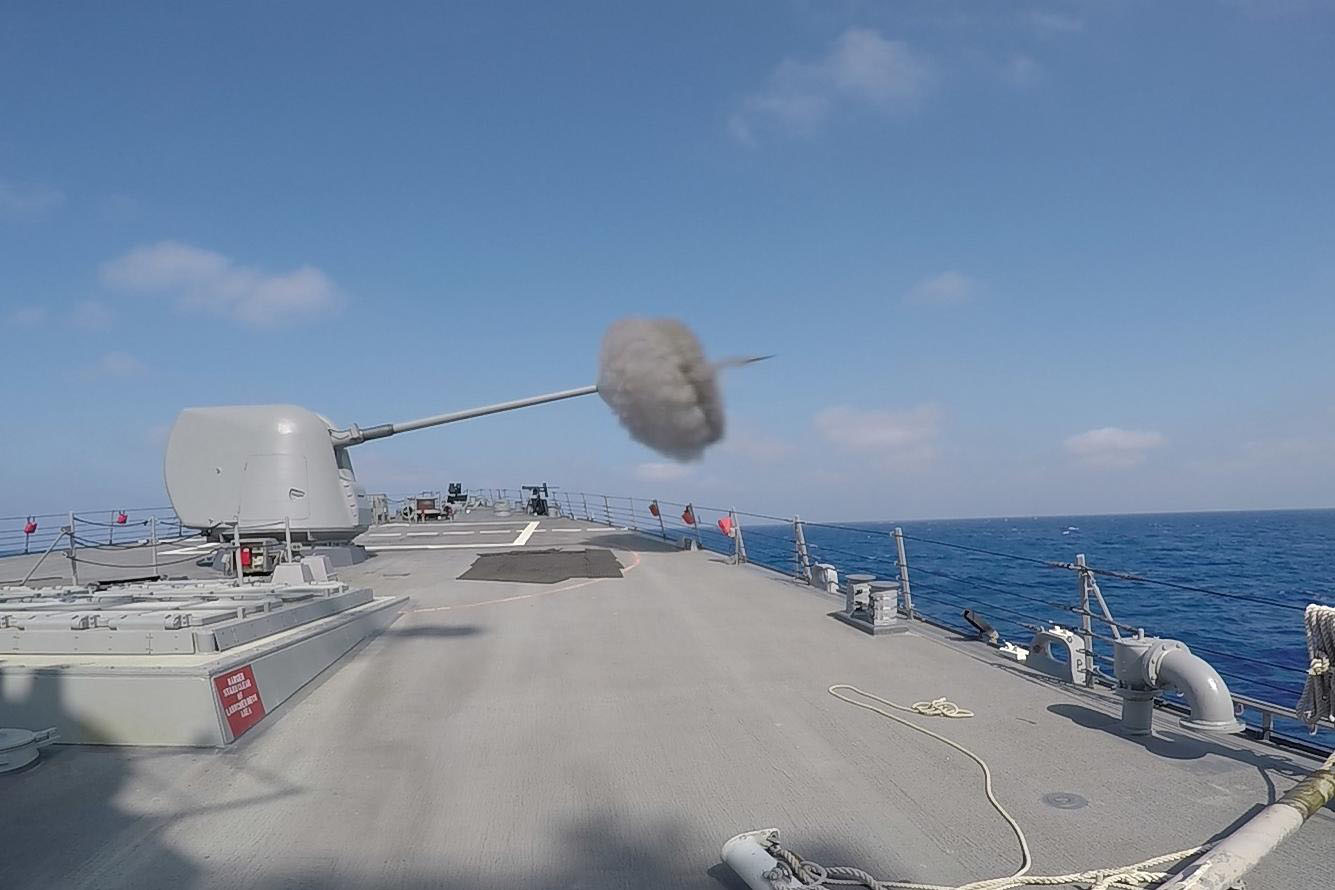 USS Carney (DDG 64) fires its MK 45 5-inch lightweight gun during a live fire exercise while on patrol in the Mediterranean Sea on Aug. 7, 2016. US Navy photo.

In this case, the destroyer brings more firepower than the LSD does, allowing the DDG to not only protect the LHD but also support the strike mission from the sea in a way that another amphibious ship could not.

This pairing freed up Whidbey Island to join San Antonio for patrols of the Gulf of Aden.