The damaged Littoral Combat Ship USS Coronado (LCS-4) will likely be delayed arriving at Pearl Harbor for repairs due to twin Pacific hurricanes headed for Hawaii, USNI News has learned.

The twin storms are headed west past the Hawaiian Islands and toward the direction of Coronado heading east to Joint Base Pearl Harbor-Hickam.

Hurricane Madeline is set to pass south of the big island of Hawaii on Tuesday evening local time while Hurricane Lester is tracking to pass northeast of the island chain this weekend. 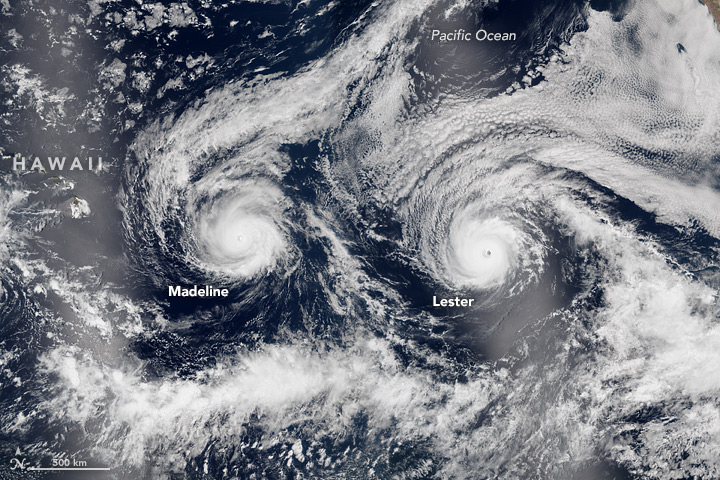 NASA Photo on Hurricanes Madeline and Lester from Aug. 29, 2016

The Independence-class LCS is operating under power restrictions following a Monday engineering casualty. The ship is restricted to 10 knots and operating with fleet oiler USNS Henry J. Kaiser. USNI News understands that in order to avoid the worst effects of the storm the trimaran will likely

“As with any U.S. Navy ship at sea, we monitor weather reports constantly and take precautionary measures as needed to navigate safely,” U.S. 3rd Fleet spokesman Cmdr. Ryan Perry told USNI News on Wednesday.
“Coronado continues en route Pearl Harbor and will adjust her track as necessary for storm avoidance.”
As of Tuesday evening, the Navy has not had to scramble ships from Pearl Harbor to weather the storms at sea.

On Monday, Coronado suffered an engineering fault sources told USNI News was related to the composite shafts and couplings that connect the ship’s diesel and gas turbine engines to the water jets.