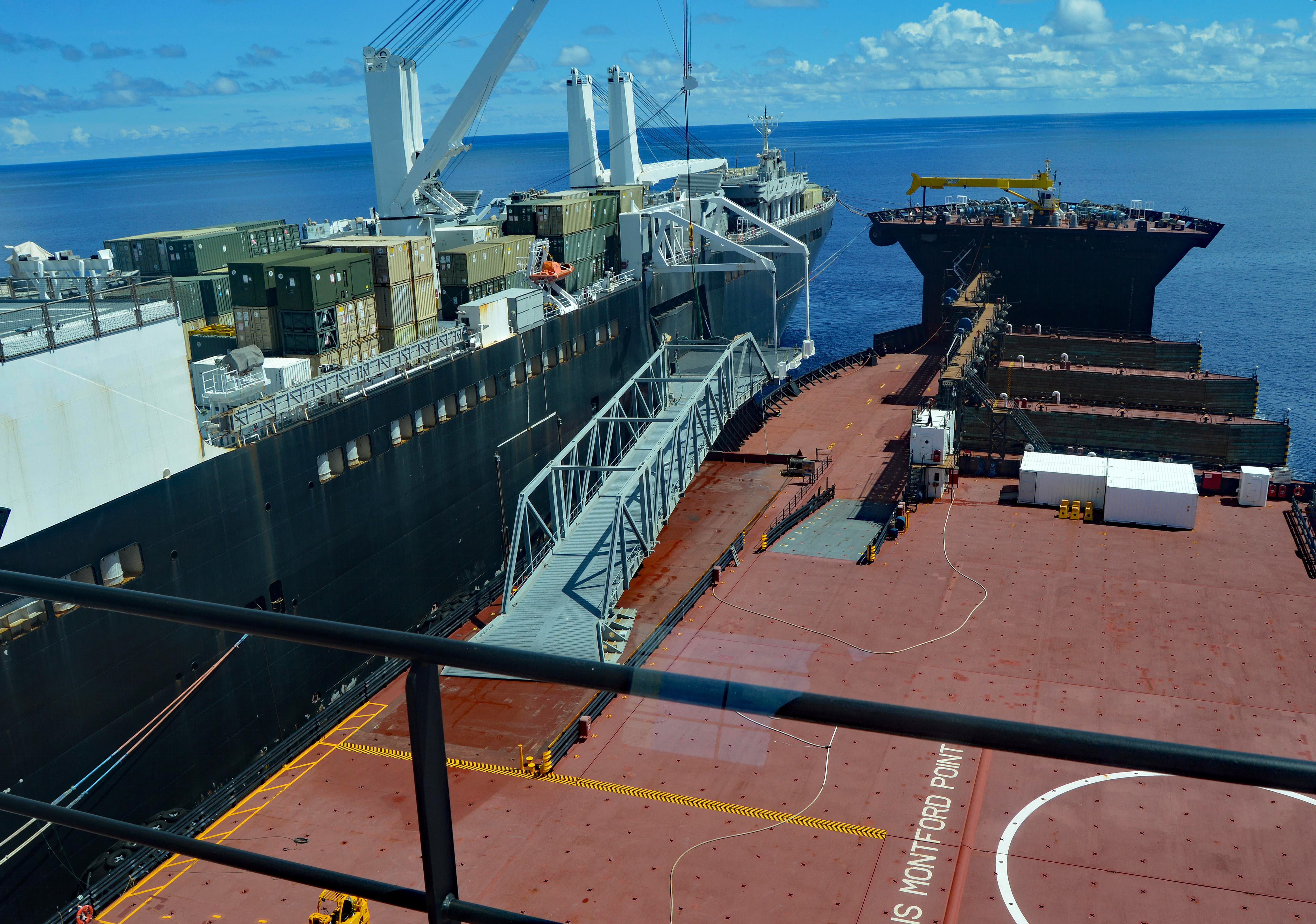 Seabasing forces in the Western Pacific continue to build proficiency as they practice marrying up expeditionary transfer dock USNS Montford Point (T-ESD-1) with local large medium-speed roll-on/roll-off ships (LMSRs), but weather has proven to be a big challenge to these seabasing exercises, the head of the Navy’s WestPac seabasing effort told USNI News.

Maritime Prepositioning Ships Squadron (MPSRON) 3 recently held its third seabasing event with Montford Point, during which the ESD and USNS Dahl (T-AKR-312) came together for a “skin-to-skin” docking at sea.

In a complete seabasing event, after the skin-to-skin is complete a vehicle ramp would be lowered to connect the two ships’ decks and vehicles from the LMSR would drive onto the ESD – and other cargo could be transferred by crane – at which point the vehicles and cargo would be loaded onto surface connectors and taken ashore. This full capability has been tested in Southern California prior to Montford Point deploying to the Western Pacific, but MPSRON 3 has not yet conducted the whole evolution.

A key challenge has been weather. The cranes and ramps are limited to sea state 3 conditions – about 10-knot winds and three-foot waves – which was fine in San Diego but has proved challenging near Japan and the Korean Peninsula. USNI News understands that, depending on how much cargo is being transferred, the whole evolution could take several days to a week, and MPSRON 3 has been challenged to find a string of days where the weather is calm enough to support seabasing activities.

The ESD came to the Commander of Logistics Group Western Pacific/Commander Task Force 73 out of Singapore in April 2015 to begin operations in the region, and that September the ship conducted its first skin-to-skin near Okinawa, MPSRON 3 commodore Capt. Eric Lindfors told USNI News.

A January 2016 event in the Sea of Sasebo was canceled due to weather, and a March event with USNS GYSGT Fred W. Stockham (T-AK-3017) was conducted off the coast of Pohang, South Korea, after several weather delays. That March event included driving a Humvee down the ramp from the LMSR to Montford Point, the first time any cargo transfer had taken place in theater. A MH-60 helicopter also flew from the ESD to the LMSR for the first time, which is “very similar to (underway replenishments), except you’re closer,” Lindfors said.

The most recent seabasing event on July 21 and 22 “actually went very smoothly, mainly because the weather really cooperated,” Lindfors said. However, “weather is a continual battle up there for all parts of the military.” 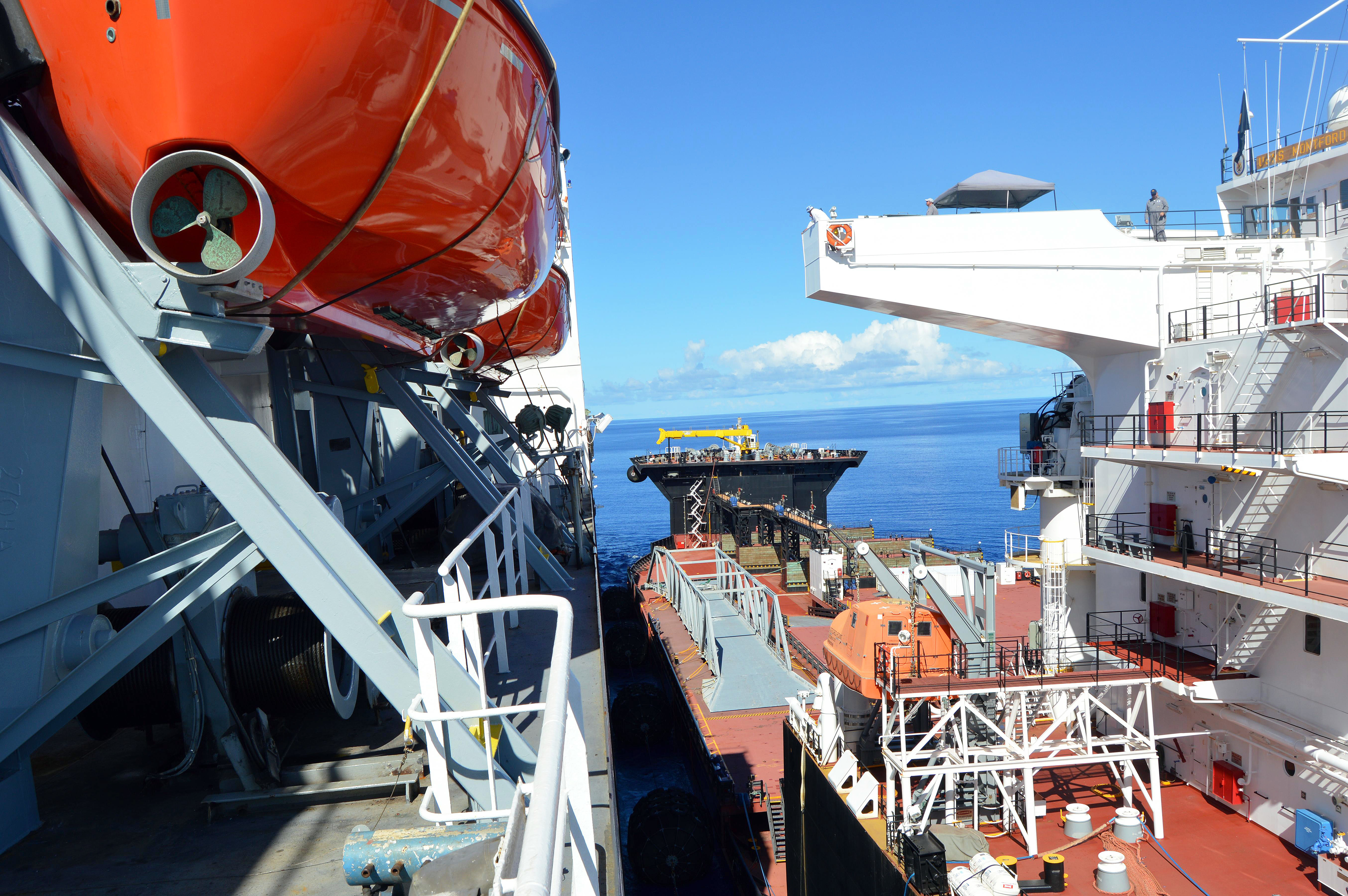 Expeditionary transfer dock USNS Montford Point (T-ESD 1) and maritime prepositioning force ship USNS Dahl (T-AKR 312) navigate alongside each other prior to conducting a mooring evolution and skin-to-skin operations on July 21, 2016. US Navy photo.

The MPSRON is also working off a draft operating manual, and with civilian mariner crews that rotate every four months, Lindfors said a main goal is still crew proficiency.

“We have a numbers battle, you have crews that are on for four months at a time and people constantly rotating,” he said.
“We’re getting everyone cycled through to have the experience so that when we get a call to task in the real world it’s just another evolution, we’ve had a chance to build our expertise, we’ve learned the lessons that we needed to learn and we can execute and support that Marine Corps team.”

The bulk of the lessons learned so far have been related to line handling. Decisions on line placement and line handling processes were made in the U.S., with much calmer seas. In the Western Pacific, though, with rougher seas, the basic question of “where the lines go” is up for debate so as to increase safety. Last month’s seabasing had the line handlers passing two lines at once, which proved to reduce lines getting tangled and sped up the process. That, along with other lessons learned, will inform the final operating manual.

Lindfors said the range of weather conditions they crews have experienced also led to lessons learned.

“It’s hot in Saipan, it was intense heat and things that we learned was the Montford Point doesn’t have a flying bridge and so the bridge wings are completely open to the sun – and when you’re sitting out there for six, seven hours, the heat takes a whole new level there,” he said. The MPSRON is looking for ways to build an awning to provide relief from the sun and rain.

While the awning idea is being handled locally, Lindfors said he’s passing other lessons learned up the chain of command to seek material solutions for Montford Point and its sister ship, USNS John Glenn (T-ESD-2). 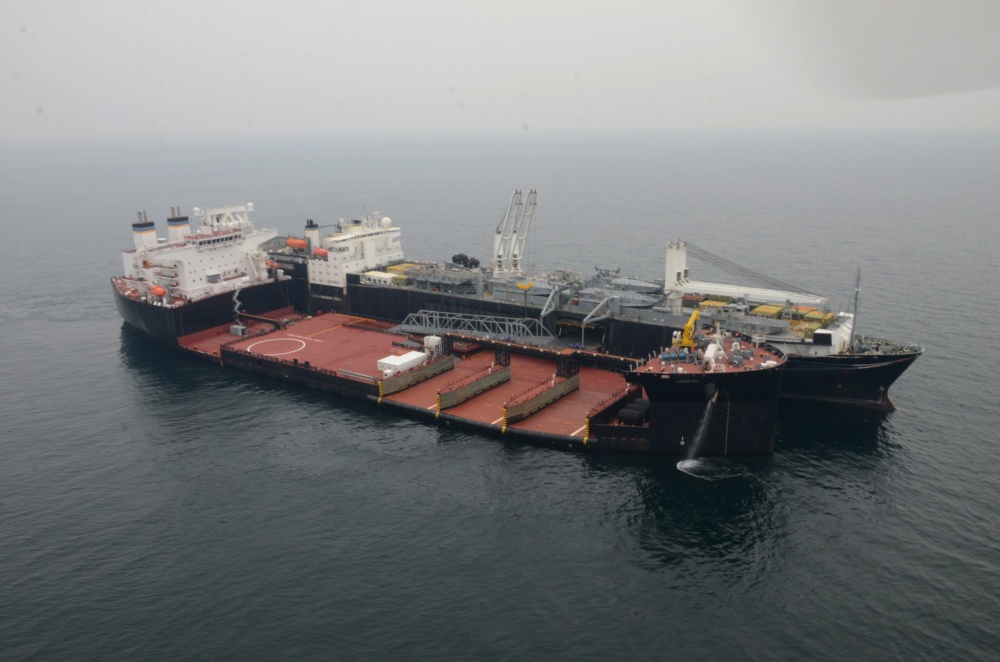 One of the civilian mariners noted that some commercial ships use a different line that is stronger and easier to handle in bad weather, which Lindfors said he’s talked to headquarters about researching. Similarly, the sea state 3-limited ramps and cranes may be inadequate for the theater, and Lindfors said discussions are happening at a higher level to potentially pursue alternate equipment. The Expeditionary Fast Transport vehicle, formerly called Joint High Speed Vessel, also has a ramp limited to sea state 3, but the Office of Naval Research has been working on a ramp that would allow cargo movement in rougher seas.

“Weather is one of those things where we have kind of placed a limitation on ourselves, we’re limited to sea state 3 and rightfully so – we’re taking pieces from the commercial industry and we put them together very quickly to get this capability out to see what we could learn from it,” he said, referencing the commercial-based design of the ESD and the two-year timeline from concept to lead ship acceptance.
“Weather is one of those things we’re always going to take a look at – right now we’re in phase 0 operations and we’re going to take our time and do this safely. But risk is assessed differently in a time of war, and there’s discussions going on about how we can change things to give us more capability (in higher sea states), but I really don’t have a lot of visibility on those right now.”

More immediately, Lindfors is focused on proficiency. Though the next seabasing event has not yet been planned, he said he would like to keep the ESD and the LMSR married overnight next time.

Last month, “we did place the vehicle transfer ramp down, we had a couple personnel go between the two ships but then we raised the ramp and disconnected and broke away,” with the whole evolution happening during the daytime.

“Normally … these ships would be married up overnight because you’re going to be continuing to do offloads throughout the entire [duration], and we haven’t done that yet. That’s on my list of things to do for the future, and there’s some risk that’s involved in that and it has to be done in the right place at the right time. Both (ships’) masters have to be comfortable with it.”

“We’ve been kind of focusing on, here is the seamanship part, and after you’re very comfortable with the seamanship piece then comes down to the download of vehicles,” he said.