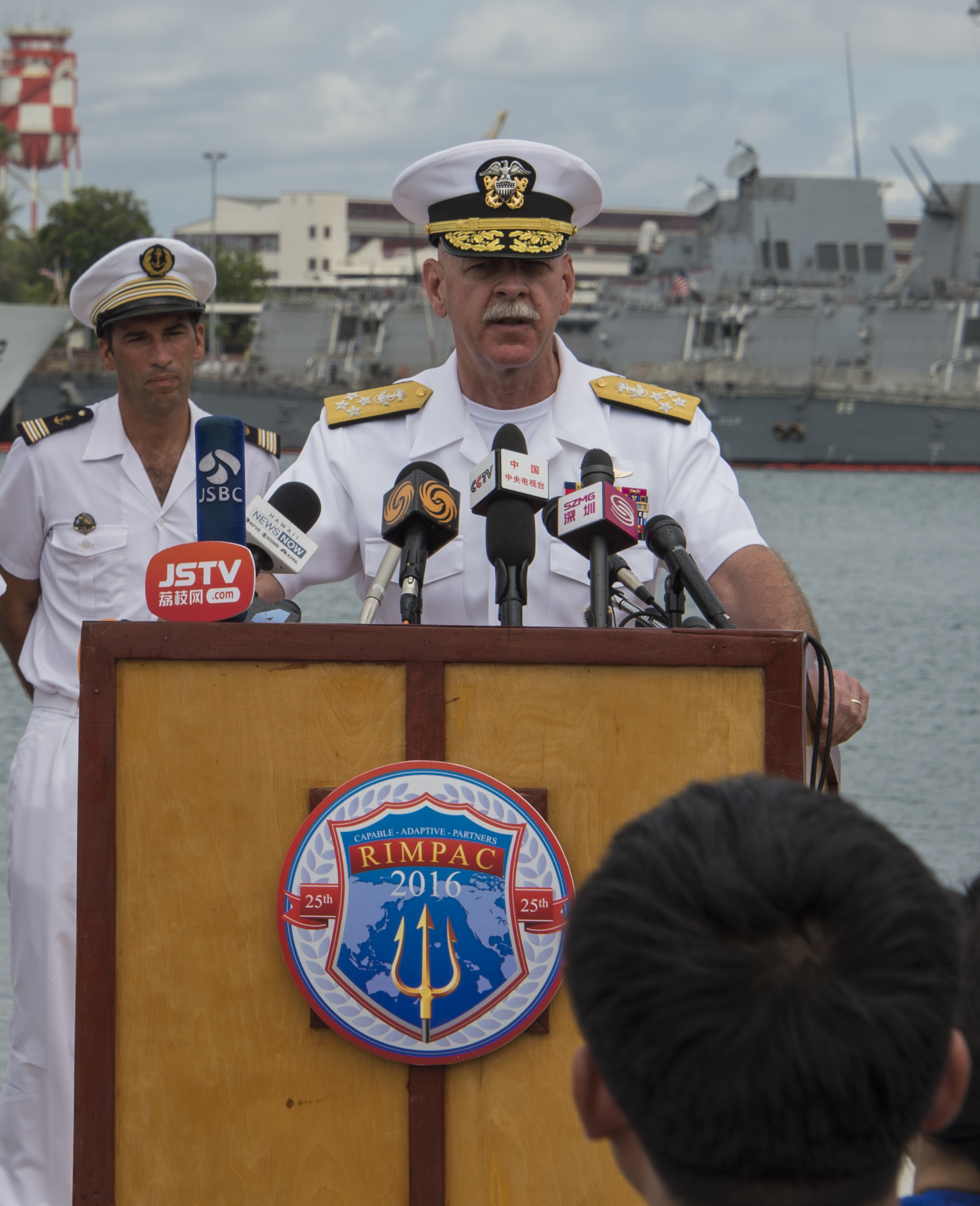 The head of U.S. naval forces in the Pacific emphasized the importance of military-to-military transparency to his Chinese counterparts in a visit to the Qingdao headquarters of the People’s Liberation Army Navy (PLAN) North Sea Fleet on Tuesday, according to a readout of the meeting from the Navy.

In a meeting with North Sea Fleet commander Vice Adm. Yuan Yubai, U.S. Pacific Fleet Commander Adm. Scott Swift, “emphasized to Yuan the importance of transparency, parity and reciprocity in the effort to improve the relationship between the Pacific Fleet and the (PLAN),” according to the readout.
“Swift commented that despite any differences in national policies, it is incumbent upon fleet commanders like himself and Yuan to ensure that actions at the tactical level do not have unintended strategic implications.”

In comments to The Associated Press, Swift cited Beijing giving no explanation for the last-minute refusal for the John C. Stennis Carrier Strike Group to make a port call in Hong Kong as a failure in military transparency.

He also cited a Tuesday revelation from the Center for Strategic and International Studies – via The New York Times — that China has not said why it constructed hangars for use of military aircraft adjacent to large runways on artificial islands in the Spratly Island chain in the South China.

“That increases the angst and uncertainty, that lack of transparency, and that is generally destabilizing as opposed to a stabilizing action,” Swift told the newswire. 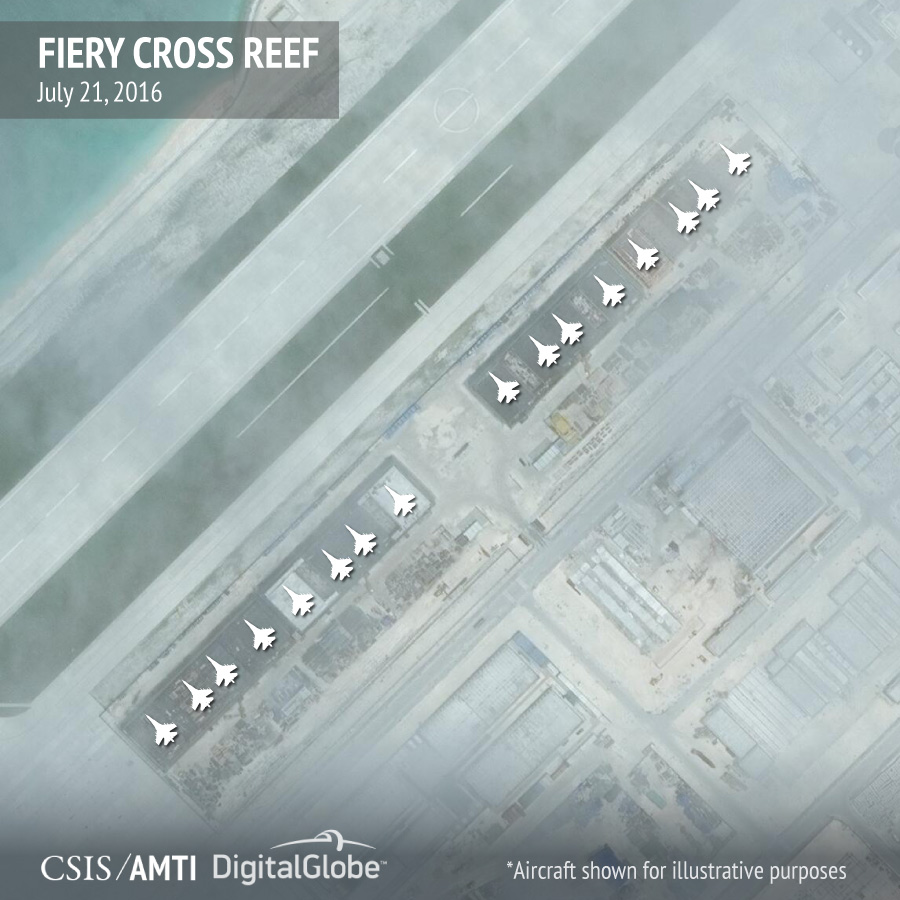 The smallest hangars, “can easily accommodate any fighter-jet in the People’s Liberation Army Air Force (PLAAF), including the J-11 and Su-30. The second type of hangar is large enough for the H-6 bomber and H-6U refueling tanker, Y-8 transport aircraft, and KJ200 Airborne Warning and Control System plane,” read the report. “The largest of the hangars can accommodate the largest planes in the PLAAF fleet—the Y-20 and Il-76 transport planes, Il-78 refueling tanker and KJ-2000 surveillance aircraft.”

China has repeatedly said the Spratly installations are not for military use. However, since the U.S. Navy has resumed freedom of navigation operations in the South China Sea, military and civilian leaders have said they will appropriately defend the installations. To date, China has only landed civilian aircraft on the artificial islands.
U.S. officials have said the installations could have a coercive peacetime effect on regional neighbors but would be easy targets in the event of a full-blown war.

Swift also expressed concern over planned Chinese-Russian drills in the South China Sea planned for September – Joint Sea 2016 – saying that there were other places where the drill could have been conducted.

Swift’s visit comes a day after the guided-missile destroyer USS Benfold (DDG-65) made the first Chinese port visit by a U.S. ship after an international tribunal ruled invalid many South China Sea claims made by China and a few weeks after Chief of Naval Operations Adm. John Richardson visited his counterpart in Beijing.

The following is the complete U.S. Navy readout of Swift’s meeting with Yuan.

The meetings occurred during Swift’s travel to Qingdao and Beijing for senior leader engagements and coincided with the guided-missile destroyer USS Benfold’s port visit to Qingdao.

Swift thanked his hosts for their warm hospitality and highlighted the PLA(N)’s participation as one of 26 navies in the recent U.S. Navy-led multilateral Rim of the Pacific (RIMPAC) exercise held off the coast of Hawai’i and southern California. Swift underscored the importance of the spirit of inclusiveness that is a hallmark of RIMPAC, a unique forum that allows a growing number of navies to set differences aside and train together as maritime professionals. Swift also praised the improvement of the PLA(N), returning for their second RIMPAC, as one of the relatively new participants in the 25th edition of the exercise that began in 1971. One of the areas the PLA(N) trained in during this year’s RIMPAC was submarine rescue, included in the exercise for the first time.

Reiterating comments he made when meeting last year with the commander of the PLA (N), Adm. Wu Shengli, Swift emphasized to Yuan the importance of transparency, parity and reciprocity in the effort to improve the relationship between the Pacific Fleet and the PLA(N). Swift remarked that sustained navy-to-navy engagements, including exercises like RIMPAC, port visits by ships like Benfold and professional exchanges like his visit to North Sea Fleet, were essential building blocks toward increasing cooperation and reducing tensions at sea. Swift noted that Qingdao was where the multilateral Code for Unplanned Encounters at Sea (CUES) protocol was signed by regional navies, including the U.S. Navy and PLA(N), during the 2014 Western Pacific Naval Symposium, and that both navies had demonstrated the value of CUES several times in international waters. Swift advocated for the expansion of CUES to include all regional naval forces, including coast guards.

Swift and Yuan also discussed operations at sea. Swift commented that despite any differences in national policies, it is incumbent upon fleet commanders like himself and Yuan to ensure that actions at the tactical level do not have unintended strategic implications.

Yuan later joined Swift aboard Benfold for a visit with the ship’s crew and a reception hosted by the ship to highlight the cooperation between the two navies.